Bournemouth vs Peterborough: Our top tips

Bournemouth slipped up in their bid to catch Fulham at the top of the table at the weekend meaning they need to bounce back here. Will they? Find out with our Bournemouth vs Peterborough match preview with free tips, predictions and odds mentioned along the way.

A handicap win for the Cherries

We kick off our predictions by backing Bournemouth to win this game with a minus one handicap. The Cherries will be reeling from their weekend loss and we fully expect them to come hurtling out of the changing rooms. Their longer term form is decent enough after all with four wins in their last five league games. Given they're hosting a Peterborough side that have lost seven of their last eight games including their last three by more than a one goal margin we can see this becoming a rather one sided affair. It's been a while since Bournemouth last hosted the Posh but, when they did, it ended in a crushing 5-1 win for the home side.

Our next tip for this match is that we'll see over 2.5 goals. Peterborough have gone over 2.5 goals in four of their last five away games whilst Bournemouth have seen three of their last five home matches go north of the all important 2.5 cut off. What's more is that both teams have high season averages for total goals. Bournemouth have averaged 3.1 goals per game at home, which gives them the third highest home total goals in the league. Peterborough meanwhile have averaged 3.2 in their away games over the course of the season; that's the fourth highest away game average. Combined together, those stats point to a high scoring match.

All the stats & odds for Bournemouth vs Peterborough

Bournemouth vs Peterborough: Check out the team lineups

At this moment in the season it looks highly likely that Bournemouth and Peterborough will be playing their football with an entire league between them next season. Of course, if this result goes differently to how we – and the bookies – see it, then that could be all change at the final whistle.

Bournemouth had been ticking along nicely until the weekend; their loss to Preston, in which they blew a one goal lead, has given a massive boost to Fulham and makes games like these absolute must wins for them to remain on track for the top two.

Peterborough are eight points from safety right now and their form does little to suggest they will escape such a perilous position. Of course, if they could mastermind a victory over a high flying Bournemouth then it could just give the entire club the boost it needs.

The final word on Bournemouth vs Peterborough 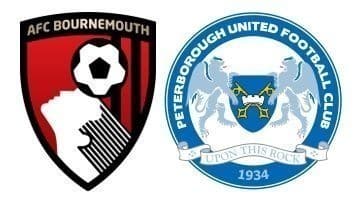