In this article, we will give you our recommendations for the top free betting tips for the Bournemouth vs MK Dons League Cup fixture. If you want more League Cup betting tips, you can head over to our website.

Betting Tips, Predictions and Odds for Bournemouth vs MK Dons

We recommended the top betting tips for the Bournemouth vs MK Dons match below. All the odds are from the bookmaker platform NetBet.

Remember to always check out the odds on the bookmaker platform before you place a bet because they are subject to change, which means that they could get updated at any time after we posted the article.

50% of the last eight games for Bournemouth ended without both teams scoring goals. Also, three of the last four head-to-head games between the teams also ended without a BTTS outcome, so it's likely that this match will end the same way.

Bournemouth won two of the last three head-to-head fixtures against MK Dons and over the years out of thirteen head-to-head games MK Dons won against the Cherries only four times and the last time was over eight years ago.

Head-to-Head Statistics, Scores, and Latest Odds for the Match

These are the most recent scores and statistics for the Bournemouth vs MK Dons League Cup fixture are in the table below.

Over the years, MK Dons and Bournemouth have met for League One matches mostly, and in 2018 and this year they played together in the League Cup. Bournemouth has a better chance of winning despite the two injured midfielders on their roster. Junior Stanislas has been out for the last six fixtures, while Lewis Cook hasn't played since March this year because of his injury.

MK Dons don't have any injured or suspended players on their squad, but we don't think that will help them much against Bournemouth who recently played in the Premier League for five seasons before returning to the EFL Championship in 2020. MK Dons have gotten as far as winning League One in the 2014-2015 season. 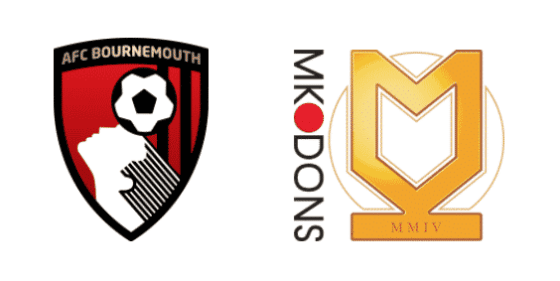 Common Questions Regarding the Saturday Fixture