Bournemouth vs Derby: Check out our betting tips

On league position Bournemouth should make light work of Derby. That didn't work against Peterborough in the week though. Will the Cherries bounce back here? Find out with our Bournemouth vs Derby match preview with free tips, predictions and odds mentioned along the way.

Bournemouth might have been held by bottom club Peterborough last time out but we still expect them to see off Derby. Even accounting for that Peterborough draw, Bournemouth still have three wins from their last five games meaning they're averaging two point per game over that period; it's not bad form. Derby meanwhile have lost three of their last five games and, more importantly, have lost their last six on the road. Anything but a home win would be a big plus for Wayne Rooney's men but we don't see it.

Our next tip for this match backs someone to fail to find the net. Admittedly, the likely candidate to blank is Derby as they've done so in five of their last six away games but Bournemouth have failed to score a couple of times in recent weeks as well – against Boreham Wood and Hull. Keeping it tight will be Derby's best chance of getting a result but it will also limit their attacking output; as such a BTTS ‘no' bet looks sensible.

Here are the key stats & form guide for Bournemouth vs Derby

This weekend is setup to be a big one at the top and bottom of the table with the way the fixtures fall. Bournemouth can't afford to slip any further in the promotion race whilst Derby could do with a big scalp to inject further positivity into their squad.

Bournemouth are slipping away from their title race as each week passes at the moment. They've wobbled as Fulham gain momentum. After failing to beat Peterborough, another loss here would raise questions about their top two ambitions as well. They need to avoid that.

Derby have had a rather miraculous season to even be in the conversation of staying up. That said, they still have work to do and will likely need to take some points from games where they're expected to get nothing. This could be the perfect opportunity to do that. 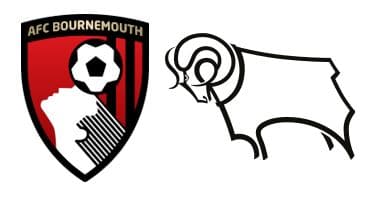