Coventry's season might be destined for mid table but Bournemouth are still gunning for promotion with the top two the win. Can they inch closer to forming up that promotion here? Find out with our Coventry vs Bournemouth match preview with free tips, predictions and odds mentioned along the way.

Neither of these sides have amazing form in their respective home and away records of late but we are backing Bournemouth to win when they clash on Easter Monday. The Cherries have lost two of their last six away games but have picked up some decent results within that period as well – including a draw away at Sheffield United, which shouldn't be seen as a negative result, and a win at Huddersfield. Coventry meanwhile have just one win in their last five home matches and haven't won either of their last two on their own patch.

Next up in our Coventry vs Bournemouth prediction we back both teams to score. Coventry have found the net seven times in their last five home matches whilst Bournemouth have scored six in their past five away matches. What is perhaps more key to this tip though is the head to head record; each of the last three meetings between the sides have seen goals for both teams.

Here are the key stats & form guide for Coventry vs Bournemouth

Coventry vs Bournemouth: Let's look at the predicted lineups

There was a time when this game looked like it could have huge ramifications at the top of the table. That was a while ago though with Coventry since dropping well away from the promotion shake up. Can they stick a wrench in Bournemouth's plans though?

Coventry's season is drifting to an end now with a mid table finish nailed on. It's not particularly different to what people expected in pre-season  but given where they were earlier in the campaign the Sky Blues have to be hurting a little bit. They've upset Fulham in recent weeks though so won't fear their visitors here.

Bournemouth remain on course for automatic promotion to the Premier League but things aren't as comfortable as many had expected. A win here would go a long way to strengthening their grip on that top two spot but the Cherries will have to turn up.

A quickfire FAQ on Coventry vs Bournemouth 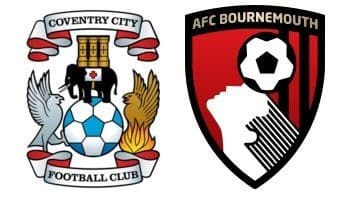