Bournemouth looked a nailed on bet for a return to the Premier League just a matter of weeks ago. That's no longer the case with their form having dipped significantly. It means games like this become bigger than they need to be; can the Cherries get three points? Find out with our Bournemouth vs Cardiff match preview with free tips, predictions and odds mentioned along the way.

Bournemouth might arrive in this game as odds on favourites for the win but we think there is some real value in the draw. Bournemouth's home form has been patchy at best lately with two wins, two defeats and a draw in their last five; the most recent duo of games serving up just one point. Cardiff meanwhile are on a good streak away from home. They're unbeaten in four with eight points taken from the last 12 available. The head to head record suggests Cardiff have a chance in this game too; the last five meetings have things even with both teams winning two whilst the other game ended level.

Our next tip is backing this game to go over 2.5 goals. Bournemouth have seen four of their last five home matches pass the 2.5 mark; their game average in that time sits at 3.2 goals per game. As for Cardiff's away record, each of their last four games have hit at least the three goal mark with the average sitting at, again, 3.2. For good measure, the head to head record leans towards an over 2.5 goals bet as well; three of the last five times Cardiff have visited Bournemouth the game has offered up over 2.5 goals. 3.8 per game is the average of those h2h matches.

All the stats & odds for Bournemouth vs Cardiff

Bournemouth vs Cardiff: Check out the team lineups

Bournemouth have suffered an undeniable drop off in form compared to where they were at the end of November but, make no mistake about it, they're in the hunt for the title still. Cardiff meanwhile can't afford their form to dip at all as they're perilously close to the drop zone. How will the sides approach this game?

Bournemouth's home fans haven't had to cheer about lately but because of others around them a win here could change that negative feeling dramatically. Will they set up to go for the jugular?

Cardiff saw a little upturn in their form after sacking Mick McCarthy but that impact is well and truly over now. The Bluebirds are in big trouble still too. They won't beat Bournemouth by playing football so expect a direct, physical approach.

The final word on Bournemouth vs Cardiff 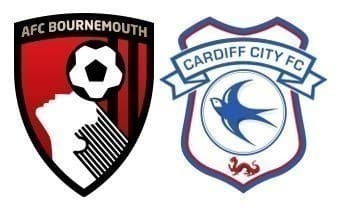