Bournemouth are looking all but sorted for a Premier League return this summer. Can they move a step closer to confirming that with a win here? Find out with our Bournemouth vs Bristol City match preview with free tips, predictions and odds mentioned along the way.

Bournemouth are currently on a four game unbeaten run in general terms and a five game unbeaten on their own patch; of the latter they've won three and drawn two. That's considerably better form that Bristol City have shown. The Robins have managed just the solitary win from their last 10 games away from home whilst six of those games have ended in defeat. Throw in that Bournemouth have won the last three head to head meetings and there is little that points to a positive Bristol City result here. As such we fancy the Cherries to open up an early lead and keep it.

We might have been fairly confident with our Bournemouth to win prediction but we don't foresee loads of goals in this game hence this under 2.5 total goals prediction.  Bournemouth have gone under 2.5 goals in three of their last five matches with a game average of 2.4 goals. Bristol City meanwhile have also gone under 2.5 goals in three of their past five matches. Again, their match average makes good reading for this bet at just 2.4 goals. With both displaying similar form in the sense of total goals and with a h2h record that shows four of five meetings going south of 2.5 this bet shows real value.

Bournemouth vs Bristol City: Let's look at the predicted lineups

Whilst every game features two teams, you can almost forget about Bristol City here. The game will be defined by what Bournemouth turn up and that will have a knock on only to the Cherries' season.

Bournemouth look serious good value for winning automatic promotion but they can't count their chickens just yet; they still have a job to do and that starts here in what should be a highly winnable fixture.

It wasn't too long ago that Bristol City had aspirations of being a Premier League club; it looks a long way off now though with 2021/22 being a lacklustre season to say the least. Even their own fans won't expect much here but a win could give them the springboard to end the campaign well.

A quickfire FAQ on Bournemouth vs Bristol City 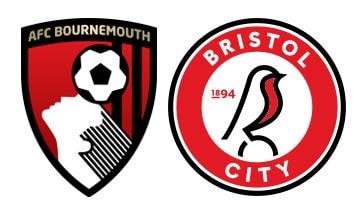