Who had Boreham Wood making it this far into the FA Cup? The answer is surely ‘not many'. Can they knockout Premier League bound Bournemouth in what will be one of the greatest upsets of all time? Find out with our Bournemouth vs Boreham Wood match preview with free tips, predictions and odds mentioned along the way.

Boreham Wood to hold Bournemouth – well, until half time

There is simply no denying that Bournemouth should run riot against Boreham Wood but that isn't how football – and especially the FA Cup works. We firmly believe Bournemouth will progress within 90 minutes but with changes to the XI likely, adrenaline expected to be high in the Wood camp and the fact the minnows are in terrific form means they might be a difficult opponent to break open in the early stages hence we're backing a draw/Bournemouth HT/FT outcome. We know it's ambitious but Bournemouth have lost three of their last five whilst Boreham Wood are unbeaten in 15; it's not a bad shout as value betting goes.

We've just spoken about what good form Boreham Wood are in and if they're to have any chance of seeing off Bournemouth then they'll need to be tight defensively. That's why we're backing them to limit their hosts to a maximum of two goals whilst suggesting they might find it tough to hit the net themselves. Boreham Wood have kept 10 clean sheets in their last 15 as well so they're no mugs at the back – even if the level of competition is a few notches higher here!

Check out the key stats & form for Bournemouth vs Boreham Wood

Bournemouth vs Boreham Wood: It's time for the predicted lineups

This game should be as one-sided as they come but this is the FA Cup and it's known for it's shocks. If Boreham Wood can land a knockout blow to Bournemouth then it will forever remain in the minds of football fans up and down the country.

Bournemouth will fully expect to win this game even with a weakened side. Given they've got their eyes on promotion to the Premier League we can expect a few changes to the lineup. They need to get it right though because an upset of this magnitude would be humiliating.

Boreham Wood have absolutely nothing to lose coming into this game. They'll be expecting to lose but who cares? They've already written their Hollywood story. Win this game though and their names really will go up in lights. Expect nothing but their strongest XI.

A brief FAQ ahead of Bournemouth vs Boreham Wood 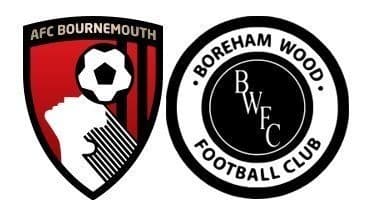