Blackpool are finding life in the Championship pretty difficult right now with back to back defeats in two home games. Can they spring a surprise at Bournemouth? Find out with our Bournemouth vs Blackpool match preview with free tips, predictions and odds mentioned along the way.

Bournemouth vs Blackpool: A trio of tips

Bournemouth too good for Blackpool

Life in the Championship is proving a struggle for Blackpool; they've taken just a solitary point from their three league games so far and things don't get any easy as they visit the south coast. Bournemouth are unbeaten in four and have taken seven points from nine in the league. We think they're about to make that 10 from 12. The squad has plenty of talent in its ranks and Scott Parker has got them playing well and scoring goals; with Blackpool not in the best of form a home win is the obvious bet.

Blackpool will fall behind

Our next tip is for Bournemouth to score the first goal. Not only can you get alright odds for this but it's a bet that you could have ‘in the bank' early on during the Saturday afternoon fixtures. Bournemouth have netted first in each of their four competitive games this season whilst Blackpool have conceded first in all three of their Championship encounters. On top of that, the last three head to head games have also seen Bournemouth score the first goal.

An easy day at the office for Bournemouth

Our final prediction is for Bournemouth to run out comfortable winners in this game. Blackpool have lost three of their last five with two of those defeats coming by a margin greater than one goal. Bournemouth by contrast have won three of their last five with two wins coming by more than the solitary goal. Then you can look to the head to head record again, the last two games have a combined score of 10-1 in Bournemouth's favour.

Check out the best odds for Bournemouth vs Blackpool

Bournemouth's quality to shine through

Bournemouth will be delighted with the manner in which they have started the season. They've taken a credible point off West Brom and backed it up with wins against teams they'd expect to beat. It puts them right in the mix early on. One of their standout players this season is Jaidon Anthony; he's just grabbed his first ever senior goal and with two assists to his name already too, Blackpool will need to beware. In terms of how things are going for the Tangerines, it looks like being a long season. They kicked off the campaign well with a draw and League Cup win but their unbeaten stretch is well and truly over with back to back defeats. They need to get back to grinding out results.

Final thoughts ahead of Bournemouth vs Blackpool 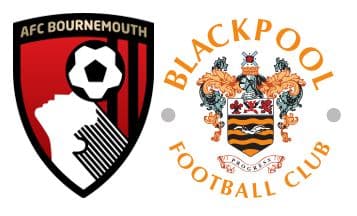