Ligue 1 has been kind to Premier League clubs for a number of years.

Patrick Vieira may have signed for Arsenal from Milan but he burst onto the scene Cannes. N'Golo Kanté dominated the middle third for Caen before his switch to Leicester City.

Fabinho moved around before ultimately finding a home with Monaco. It was with the principality club that he developed into one of the most sought-after midfielders in Europe. Now he’s bossing things for Liverpool, the European champions and Premier League leaders.

Of course, there have been plenty of flops but, generally speaking, midfielders developed in France tend to impress in England. It is why the reports claiming Boubakary Soumaré is on his way to the Premier League come as no surprise.

The 20-year-old midfielder has impressed for Lille this season and his performances have caught the eye of a number of elite clubs. The Paris Saint-Germain academy graduate is believed to be on Chelsea’s wishlist while Tottenham Hotspur, Manchester United and Liverpool are all believed to be keeping close tabs on his development.

Real Madrid also want in on this tug-of-war for the youngster. The Daily Mail claim Spurs are looking to jump to the front of the queue by leveraging the relationship assistant manager João Sacramento has with Soumaré. José Mourinho’s No.2 was with Lille prior to joining up with his compatriot in London.

According to reports in France, the midfielder wants to remain with Lille for now but the club are open to selling him if they receive an offer in the region of the £70million they pocked from Arsenal for Nicolas Pépé.

It’d be a risk to spend that much on a player with just a little over 2,000 Ligue 1 minutes to his name. But a risk worth taking?

He’s only been a starter for Les Dogues this season. But waiting to see how he develops could be a gamble. He’s already showing glimpses of superstar potential. The longer you wait, the more chance another club beats you to the punch.

With that in mind, we’ve decided to take a look at what all the fuss is about.

Deployed in a double-pivot, Lille direct much of their play through Soumaré. On average, Christophe Galtier’s side attempt 469 passes. Of those, their No.24 is responsible for nearly 13 per cent. 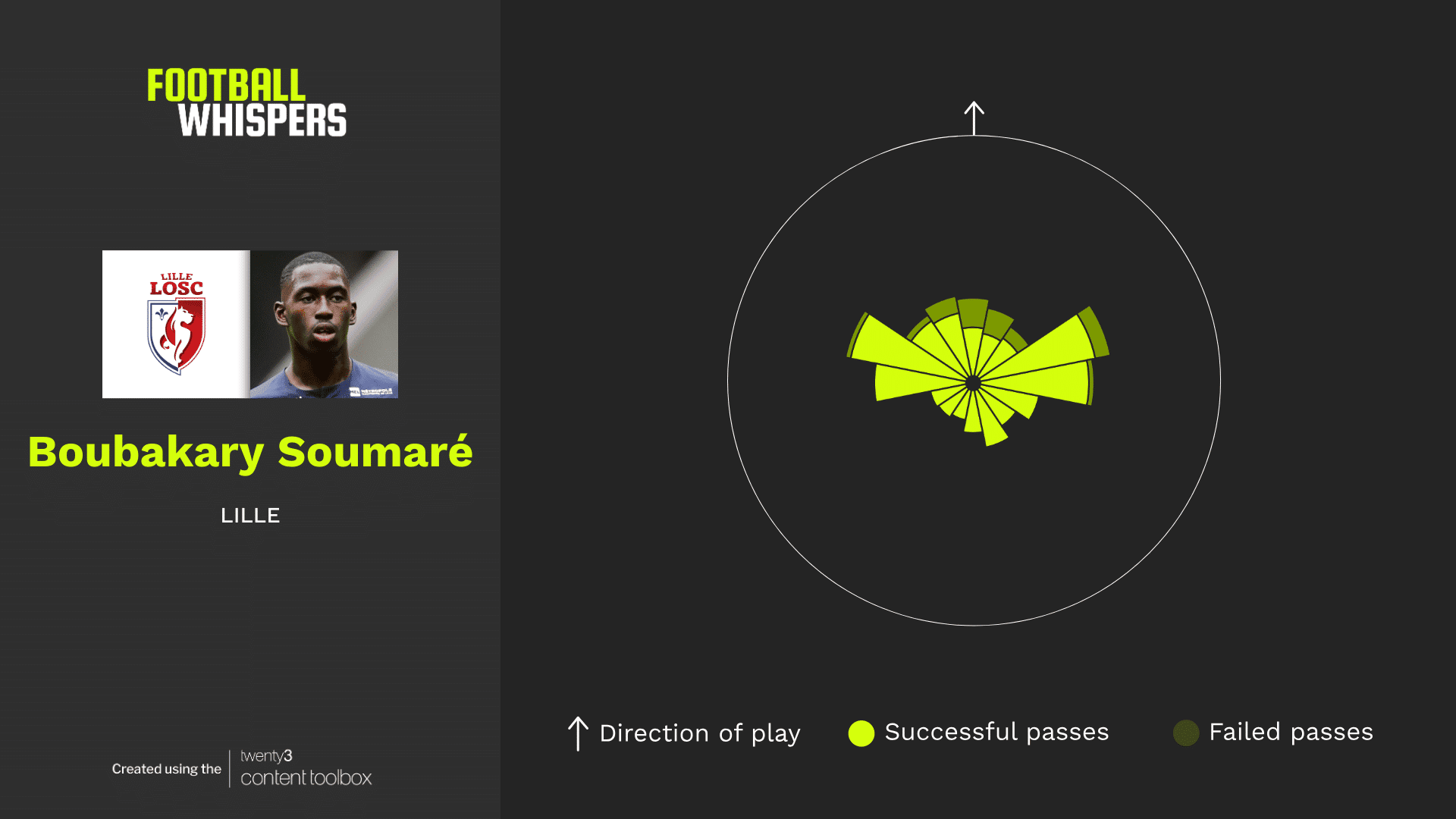 As evidenced by his passing sonar above, the 20-year-old is fairly expressive when in possession. He shifts the ball to both flanks and also looks to play passes forward when the opportunity presents itself. He's fairly well-rounded in that sense.

He doesn't rack up goals or assists, and his expected numbers aren't anything to write home about, but Soumaré is incisive when in possession. 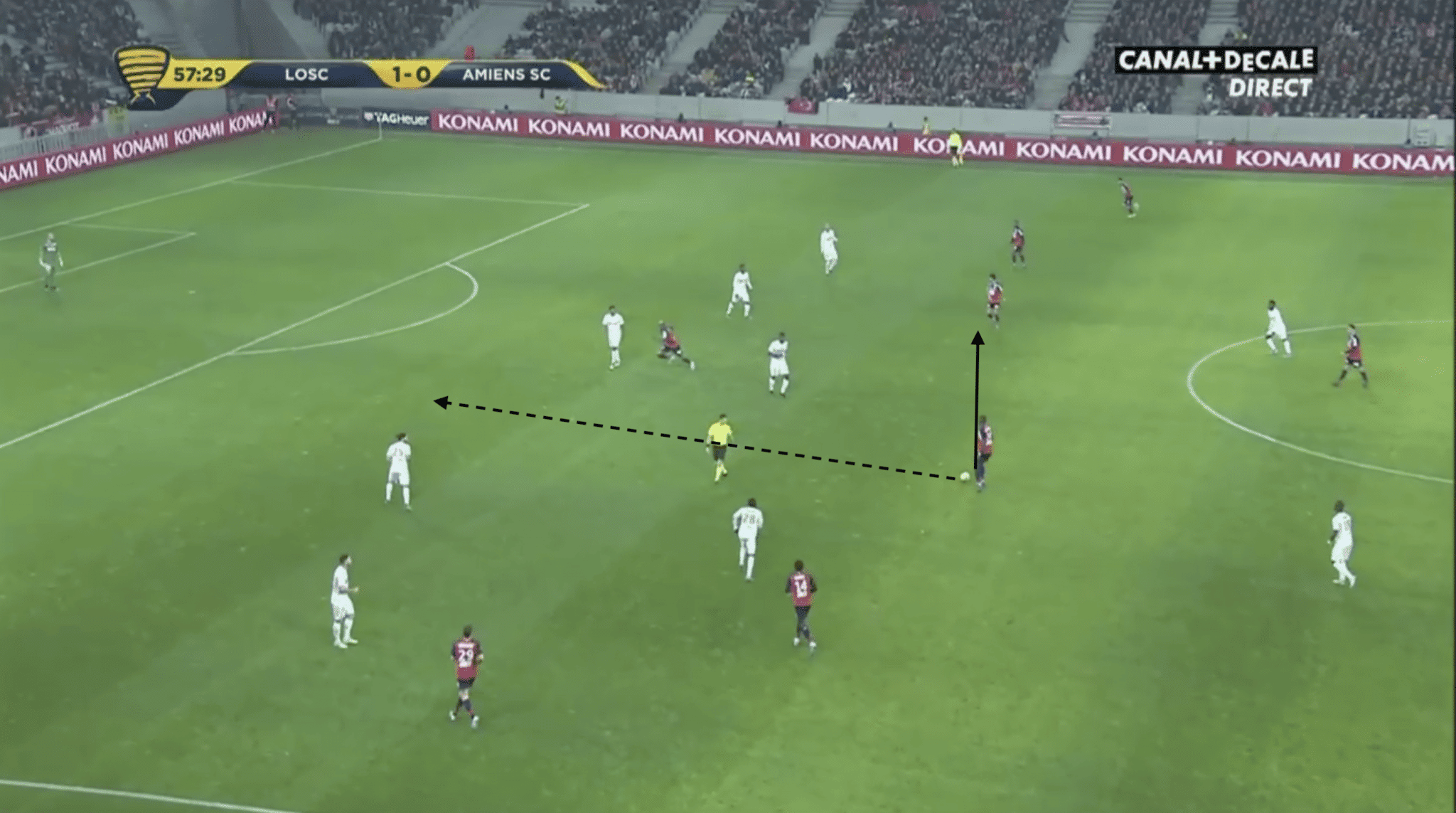 In the still above, the youngster could pass on the responsibility and play a pass to a team-mate, shown by the solid black arrow. However, he opts to play the killer pass and picks out Victor Osimhen. The ball won't make a highlight reel but it shows his mindset. He isn't a player looking to improve his numbers when there's a riskier pass available.

Over a quarter of his passes are forward, 27 per cent to be exact, and he finds a team-mate with 90.2 per cent. Furthermore, of passes attempted in the final third, 85 per cent are complete. His use of the ball is exceptional.

Without possession, he's just as good.

Soumaré is averaging 6.5 ball recoveries per 90 while also chipping in with 1.27 interceptions and 1.5 tackles. He's most active in the middle third and tends to stop the opposition from getting close to his defence.

Despite being so busy, he's only giving away 1.3 fouls per 90. This can be improved but does show he's not a serial fouler. Discipline, however, is a problem for the youngster. He's already been sent off twice this season in Ligue 1. That recklessness needs to be worked on. He needs to be a reliable cog in the team.

Right now, a £70million fee for Soumaré would be excessive but if he continues to dominate games for Lille, that valuation could turn out to be a bargain down the line. In order for him to progress, though, he needs to be playing regularly and a move to a big club could see him stagnate. Few of those competing for a top-four place would trust the 20-year-old enough to make him an immediate guaranteed starter.

He's one to watch but moving for him now would be premature. The Lille man needs extra time in Ligue 1 to fulfil the abundance of potential he has.