Denis Law will always be known as the King of Old Trafford. Worshipped, adored, he was never ignored. But he also played his part in the demise of his former club, scoring for rivals Manchester City on April 27th 1974 — a day that ultimately confirmed the Red Devils’ relegation to the Second Division in the most painful way possible.

Every great footballing dynasty will, eventually, come to an end. There was Arsenal’s ‘Invincibles', Brian Clough’s Nottingham Forest, the famous Anfield boot-room; it’s as inevitable as night following day and autumn leading into winter. And for Manchester United, their Waterloo came in the form of a cheeky back-heeled goal by one of the club’s favourite sons.

In all honesty United’s fall from grace had been on the horizon for some time, it’s just that nobody saw it coming. In 1968, a decade on from the darkest moment in their history, when half their team was lost in the Munich air disaster, Matt Busby's Manchester United stood atop the podium of European football.

The team he had rebuilt from the ashes of the original Busby Babes would win two league titles, an FA Cup and a European Cup, thanks mostly to the Holy Trinity of George Best, Bobby Charlton and, of course, Denis Law.

But by 1974 Matt Busby had moved upstairs to become a club director, only to be replaced by the hapless Wilf McGuiness and similarly ineffective Frank O'Farrell as the club went into freefall thanks to on-field capitulations and off-field friction.

Having failed somewhat miserably, Busby's two successors had both left Old Trafford after less than a year in charge, and even a return to the hot seat by Mr Busby himself was not enough to turn the tide and stop the club’s alarming slide down the table.

United finally opted for the charismatic Tommy Docherty who was the Scotland national manager at the time in the hope that this larger-than-life character could inject a little steel into a side that was quickly becoming a shadow of its former self.

Docherty took over in 1972 in what was seen as something as a salvage operation with the club staring relegation in the face that Christmas. It worked. “The Doc” eventually did retain the club’s top-flight status by turning things around in the second half of the season. 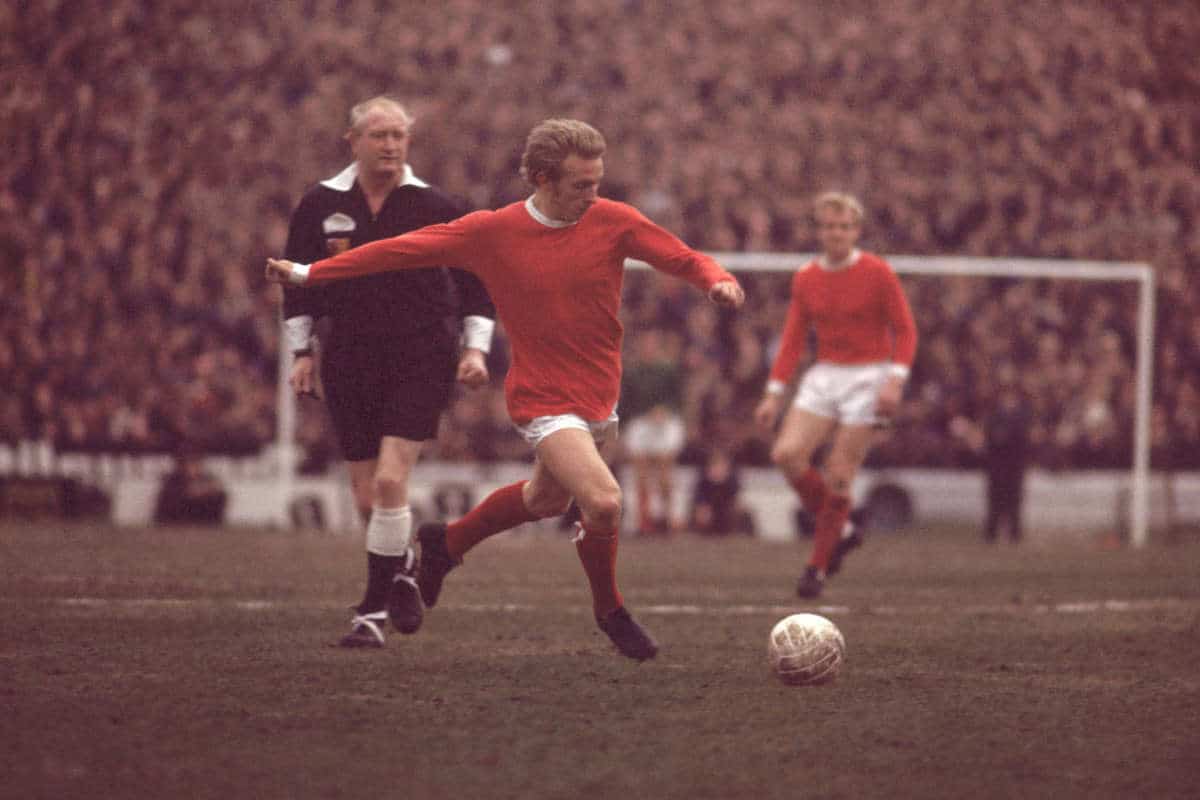 However, the divide between club legends, Best, Law, Charlton and the rest of the now youthful squad was becoming increasingly irreparable and things were made more difficult for the new United boss in the summer of ’73 when, probably seeing what was around the corner, Bobby Charlton called time on a glorious club career.

Charlton wasn’t the only club legend who had seen the writing on the wall; the turn of the decade had seen a drastic decline in the form and fitness of Denis law too, one of the greatest goal scorers in the club’s illustrious history.

Law had been transfer listed in the spring of 1970, but there was no interest in the striker, though a fine start to the following season had provided the club with a little hope that he still had something to offer them.

But tragically for Law and United his knee injury reappeared, leaving  Docherty with little choice but to let the hero move on to pastures new, though few would have predicted that he would sign for rivals Manchester City.

United’s biggest failing was not replacing their lost talents as the club struggled for goals and the 1973/74 season began poorly with six defeats in the first 12 matches. Things became so bad that at one point ‘keeper Alex Stepney even topped the goal scoring charts.

There was to be no second half recovery for Docherty’s side this time, though, as the miserable season went from bad to worse thanks to a run which saw them win only one league game between the start of January and the end of March, not to mention cup defeats in the early stages of the League Cup and the FA Cup.

April brought about something of a recovery, thanks to three successive victories over several of their fellow strugglers, but a 1-1 draw at Southampton and 1-0 defeat at Goodison Park saw United needing a win over Manchester City in the penultimate game of the season. But that wasn’t all, they also needed a favour from Norwich City

The first Manchester Derby of the season, back in March, had been something of a cagey affair, remembered more for a spat between Mike Doyle and Lou Macari who were both sent off. This game, however, had much more riding on it, with the very real possibility that United would be relegated, even if they won the match. 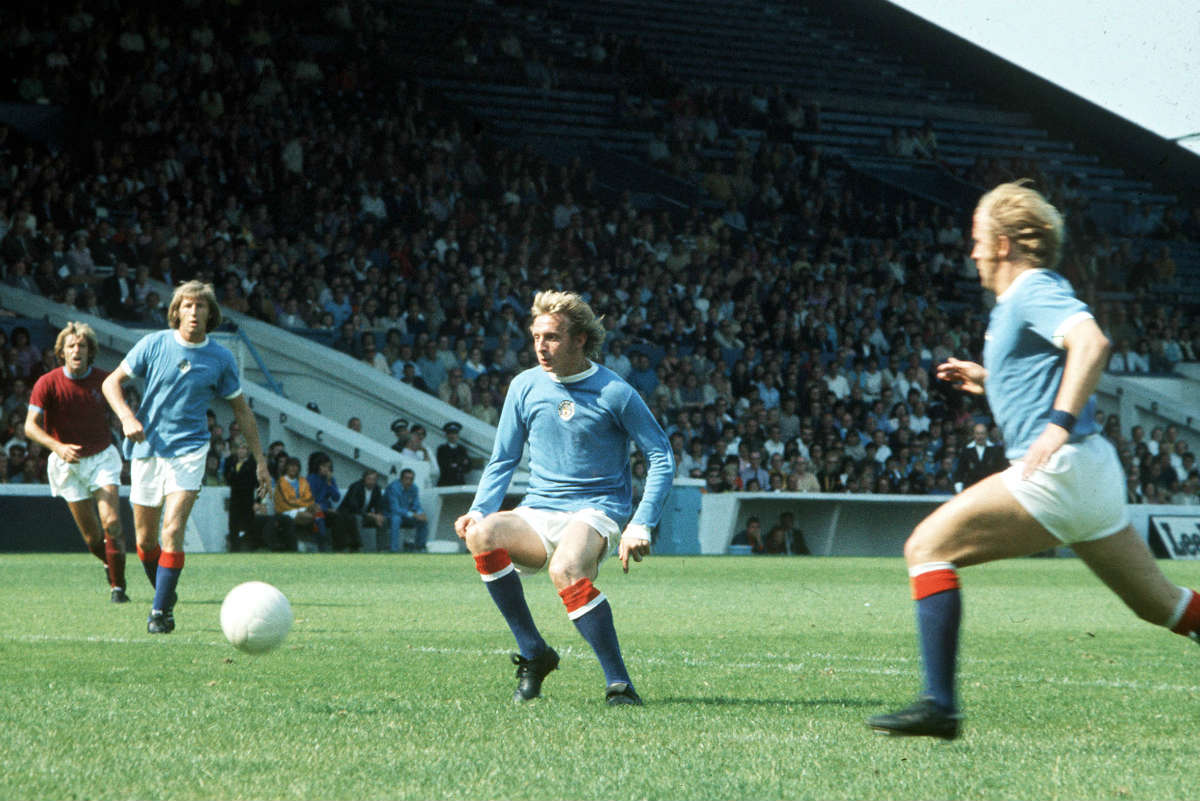 So as the two prepared to meet for the second time on a bright and breezy April afternoon this highly charged encounter had even more importance due to the huge significance of the fixture, as United knew that anything but a win would see them playing Second Division football for the first time since 1937.

Of course, not only did the game pit the two Manchester rivals against each other, it also saw the return of Denis Law, the dethroned King of Old Trafford who had been told he was surplus to requirements some nine months previously – to say he had a point to prove would be something of an understatement.

Law's appearance in the blue of City saw no backlash from the United fans, however, as the second largest crowd of the season gave him a generous ovation when he emerged from the tunnel and cheered him again when he went up for the coin toss prior to the match.

Despite having to win the game to have any chance of staying up the match itself was surprisingly uninspired. United dominated the attacks but were unable to break through the City defence and were left frustrated when two attempts were cleared off the line by City defenders, while Dennis Tueart hit the bar for the visitors.

Though most of the 56,996 there that day didn’t dare mutter it, the nightmare scenario for most United fans’ was that their former idol would, in some way, play a part in the club’s downfall while playing for their bitter rivals.

In the 82nd minute that is exactly what happened in one of the most incredible and iconic twists of fate the game has ever known.

After another United attack had broken down City saw their chance to break and stormed forward. Summerbee winning the ball and slotting a lovely pass through to Colin Bell who ran unopposed for 30 yards before feeding Francis Lee on the edge of the box.

Lee played the ball towards Law, who standing with his back to goal, instinctively back-heeled the ball which somehow bobbled past goalkeeper Alex Stepney and into the net.

Law stood motionless inside the penalty area, arms at his sides, seemingly on the verge of tears as his teammates mobbed him to celebrate the goal.

Unable to cope with what he had done he was immediately taken off and never played league football again as — four months later and after 19 years, 602 games and 303 goals — this most nonchalant of flicks would be his last ever touch in top flight football.

As a consequence, hundreds of United fans invaded the pitch, streaming down the terracing on the Stretford end and running the length of the field to where most of the Manchester City fans were gathered, while smoke bombs were let off behind the goal.

A bizarre situation then followed as the two sides attempted to finish the game while supporters ran, unchallenged, onto the field of play as the game went on around them, one even tried to make a tackle.

But with the game coming to a close thousands rushed on from all sides in the vain hope that the game might be called off and have to be replayed, but the result stood and United were indeed down.

As it turned out Law hadn't actually relegated United as Birmingham's victory over Norwich would have sent United down anyway, but Law didn't know that and he was clearly heartbroken at the thought of what his goal might have done to his former club.

United already knew their fate when they lost their final game of the season away at Stoke as the team, who six years ago had been the best team in Europe, were now no longer the best side in Manchester; although Docherty did retain the confidence of the United board and led them storming back to the top flight at the first attempt the following season.

As for the man that scored the fateful goal that day, it took him slightly longer to come to terms with what had happened, even though it actually made no difference to United's plight.

“After 19 years of trying my hardest to score goals, here was one that I almost wished hadn't actually gone in,” Law said some years later.

”I was inconsolable. I didn't want it to happen. How long did the feeling last? How long ago was the game? There is your answer.”