Erling Haaland has become one of the top transfer targets in world football after destroying scoring records in the Bundesliga and beyond. The Norwegian international is on the wish list of clubs like Barcelona, Manchester United, Manchester City, Chelsea, and Real Madrid. Now, ESPN reports that Borussia Dortmund have placed a €180 million valuation of the player in a bid to try and keep him beyond the summer. 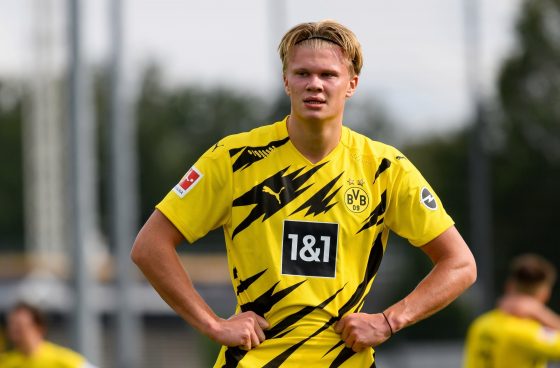 Still only 20 years old, Haaland appears to be the perfect centre forward for any club. He has the pace, power, and finishing to excel in any league. Yet, there are growing signs that Dortmund are trying every trick in the book to keep the player beyond the summer. This is despite possessing a strong hold on the player’s contract, which does not expire until 2024. A few days ago, Borussia Dortmund’s sporting director Matthias Sammer warned that the players should not think about a move before he becomes the finished product.

Now, the valuation of €180 million appears to have been firmly done to scare off interested clubs. During the current times, almost every top club is going through a difficult period on a financial front. Every club, apart from Chelsea to a certain extent, will think twice about spending such an extravagant money during these times.

Haaland was signed from FC Salzburg only in January 2020. Since then, he has been a revelation with 49 goals to earn him the title of a ‘goal machine'. These goals have not just come against minnows, as Haaland has a remarkable 10 goals in just six Champions League games.

Dortmund have already been able to successfully keep Jadon Sancho amidst heavy interest from the likes of Manchester United. Yet, the inability to challenge for the league title or progress further in the Champions League might end up hurting the club in their dreams of keeping Haaland.