Borussia Dortmund. The Yellow Wall. Great football. These things, as much as anything else, sum up a period in time and a feeling around German football culture that speak to fans the world over on a primal level. It’s not so much either one on their own, but the unique and special relationship each has with each other. Dortmund represents the club of course, with the Yellow Wall representing the Dortmund fans – and German fans – in general and the great football element is self-explanatory.

It’s not so much either one on their own, but the unique and special relationship each has with each other.

28th May 1997. Italian teams have blessed the final of the grandest of stages 7 years out of the last eight. Milan, Juventus and one losing final by Sampdoria held Italy’s flag high in the European Cup, but this day it was indeed to be Juventus and the mighty Alessandro Del Piero who would be representing the country in the final.

Their opponents would be Borussia Dortmund. A replay of the 1993 UEFA Cup final that, resoundingly over two legs, the team in yellow had lost 6-1. Revenge was on the mind and in the hearts of the great club. Revenge at the highest level.

Dortmund were flying high in the German footballing stakes. The 90’s had been kind to them. Post-1993, the prize-money won by the club meant that they could usher in a new kind of player. A higher calibre of player. 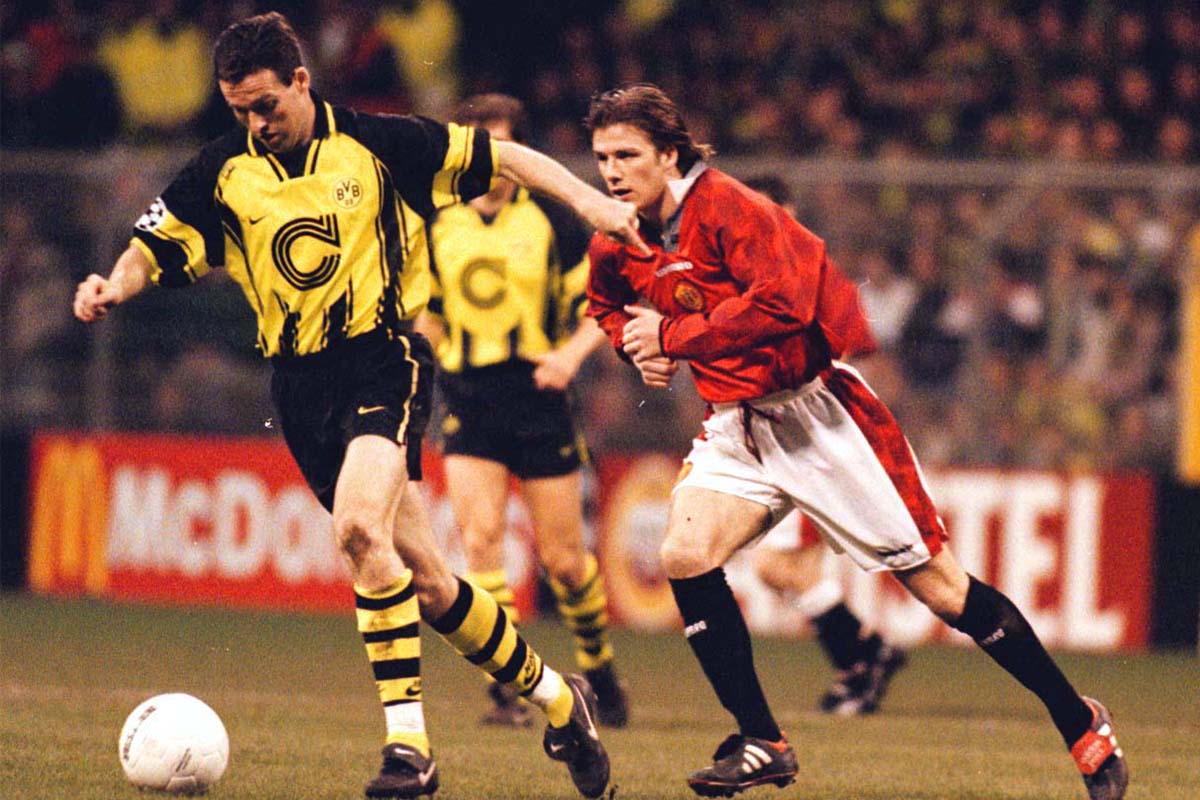 Players such as Paul Lambert, Karl-Heinz Riedle and European Footballer of the Year Matthias Sammer were playing for Dortmund, as the halcyon days of the 1990’s brought great success and even more joy.

The club, under German legend Ottar Hhitzfeld, won, and successfully retained the Bundesliga title in 1994/95 and 1995/96. These trophies were the clubs first since 1989 and cemented the clubs fortunes and flavour during the 90’s.

The aforementioned Champions League final, Dortmund’s first, ended with a win for the German side. It capped a monumental 5 years for the club, and pushed them on to even higher, more stunning heights. The win in the European Cup led to a first ever win of the Intercontinental Cup, only the second ever win by a German side. It seemed as if the dominance of the club would never end. Yet what goes up, must come down.

Just as good as the previous decade had been for Borussia, the following decade saw a drought in their progress.

It started well. 2002 saw the club secure their third Bundesliga title following an incredible run of games, culminating on them taking top of the league on only the penultimate game of the season. This year they would also get to the UEFA Cup final, losing 2-3 to Feyenoord. This success was short lived. Soon after, financial difficulty and starvation of success would begin.

The spending and lavish wages spent on big players’ seasons earlier had not afforded them enough success, financially, at least. For every title they won, they spent again to accommodate a greater increase in quality. But where does it all end? There needs to be a point in a football club’s life where they take stock of their position and stop spending.

Some clubs can continuously spend because their foundations are built so much so that a few years out of the sun and in the footballing shade will do little to their ‘brand’ – Manchester United are one example, with Real Madrid and Barcelona seemingly the only other two clubs who need to think little about their cashflow. A club of Dortmund’s size, though, has to manage the times. Manage their situation. During 2000’s, they didn’t.

2004. Borussia Dortmund fail to meet the payment terms on their players’ contract and their staff go unpaid. Debts have racked up to an unbelievable level at 200 million euros and there is little sign of this amount slowing down. The club has one of the biggest stadiums in European football and one of the most dedicated fan-bases in world football. But this hasn’t stopped them slipping into difficult, near impossible times.

The sale of their ground to aid the debt was rock bottom. The great ground, a famous ground in world football it is, yet because of mismanaged finances, the club could no longer call it their own. In the truest sense of the word.

The clubs players took a massive pay decrease too.

Then comes the legend. One of the real reasons that football fans all over the world love the German game.

On the brink on bankruptcy and failing to pay players on time, Dortmund needed help. 200 million, it would seem, is an awful lot of money. But operating costs need to be covered before any chance of a long-term revival could be contemplated. In step Bayern Munich with an offer of 2 million euros to help pay players wages and the running of the club.

In a country such as England, where great clubs such as Portsmouth and Leeds United can become almost a dot on the footballing map within months, you would never imagine a Liverpool or a Manchester United coming along to help them. To offer them a lifeline. But in Germany, sporting tradition rules and Munich were happy to help. A loan was arranged, the stadium sold and Bayern got 70% of their loan back within two months, 6 months before the agreed date, with the rest being paid in the period following. In a contrast to the countries around the world, Germany was creating a culture whereby clubs, people and rivalry mattered. In a twisted way, without Dortmund how could Bayern become a major force? They were Batman to Dortmund’s Joker. One needs the other. In success and in failure. The greatest of rivals, literally.

Years since the crippling debts Borussia have come in to profit, but their performances indeed suffered. Mid-level finishes attract mid-level players, and it’s a funk that is tough to get out of. Just look at Liverpool’s lack of success on a long-term level. They knew they needed to build slowly, build clever and build right. In came Jurgen Klopp. 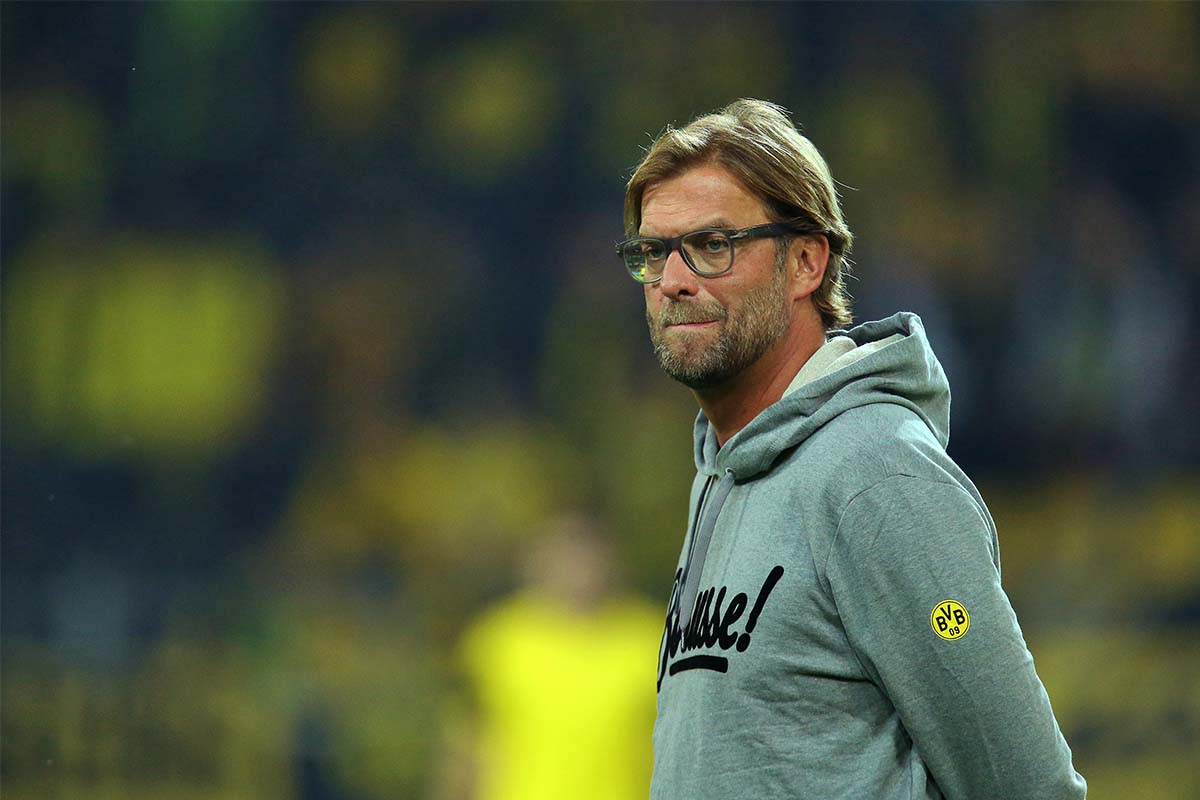 Klopp’s success and steady building at former club Mainz painted him as an attractive prospect. Exciting, talented and focused, the manager turned the clubs fortunes on their head. And how.

In the seasons between Klopp’s arrival and his departure Dortmund were near Kings of Europe. Winning the Bundesliga in emphatic fashion, twice, Klopp’s Yellow Army challenged the might of the European elite in a new way. High octane football, defensive stability but ruthless finishing was a model developed in the German’s image. Reaching the Champions League final, yet losing, would be one of the club’s largest regrets, but as for putting them back where they belonged as an institution – this worked wonders.

Popular the world over and everyone’s next favourite club, Dortmund, save for at least season, seem to have gone from strength to strength. Thomas Tuchel, their current manager has brought something new to the side. A slower build-up but as ruthless in possession as they ever have been. Quality players don the yellow shirt again, with all eyes looking to their world-famous Yellow Wall for inspiration. It is Dortmund who have changed the footballing model, but it is it Dortmund who learnt from their mistakes. And it looks like it is Dortmund who will continue to be a legendary side, rebuilt.