Bordeaux hosts Rennes at Matmut Atlantique for the eighth match of the season for both sides. We have a detailed preview of this match, including top free predictions by Football Whispers tipsters in this post.

After a comprehensive analysis of Bordeaux vs Rennes, Football Whispers has narrowed down to the best three free picks for the big game. The following are our top free predictions for Ligue 1 prediction between Bordeaux and Rennes:

The hosts to draw or win

Our first pick in this game is Bordeaux to win or draw. Completing the double against Rennes last season was an incredible feat for Bordeaux even though they finished 12th, five places below the visitors on Ligue 1 table. The hosts come to this fixture with a 1W and 1D after back to back losses and we believe home advantage should inspire the hosts to bag victories in this game.

We are also tipping a high scoring game on matchday. While the last encounters between these teams had fewer than three goals, we think this game will see a lot of goals. Both teams seem to struggle defensively and either side should concede at least twice on matchday.

Stats, the Best Odds and Team History for Bordeaux vs Rennes

Match Preview: Bordeaux Looking to Complete another Double against Rennes this Season

Bordeaux hosts Rennes in the eighth game of the season. The hosts complete the double over Rennes last season and hope they can repeat a similar feat this season. Last season’s victories were 1-nil both home and away but with the hosts having defensive worries before this game, getting a clean sheet win could prove challenging. Rennes comes to this game with a clean sheet victory of 6-0 over promoted side even though it is the only win the last five games. On the other hand, Bordeaux is now unbeaten in two games but have failed to keep a clean sheet since the new season kicked off. 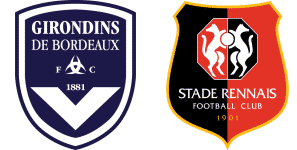 How did these teams perform against each other last season?

Bordeaux completed the double against Rennes last season by winning both legs in a similar fashion of 1-0 home and away.

What is the form of these teams in the last 5 games?

Bordeaux has DWLLD while Rennes has WLDLL before this game.

What is time will this game start?