Nantes host Bordeaux for a Ligue 1 searching for Conference League qualification places on a Sunday. We have the details and information you need for informed betting on the Ligue 1 game.

Our top predictions for Nantes vs Bordeaux

Here are the best two predictions for Nantes vs Bordeaux, a fixture set for Sunday 24th April 2022.

Nantes' Conference League qualifying chances is still a reality with five games remaining. Nantes' home performance has been fantastic, recording seven wins in the last nine home matches. The host did not blink even when the runaway league leaders visited their home ground. We are tipping that the Sunday evening clash will be a tall order for Bordeaux. Back the home team to win in the game between Nantes and Bordeaux.

This clash will be the tenth meeting between Nantes and Bordeaux since 2017. Bordeaux has been the dominant side in this fixture during this period. Read our analysis to ascertain whether the visitors will continue their dominance over the Sunday hosts.

Nantes relies on home form to make a mark in Ligue 1 this season. Antoine Kombouare lines up his side in his trademark 4-2-3-1 formation to take control of the midfield at home. Lille is the only team that broke down this formation to take all the three points in Nantes' last nine home matches. However, Nantes must be worried about a dip in performance, recording a single Ligue 1 win in five attempts.  The reverse encounter between these teams ended all square with a 1-1 scoreline. Three players will miss the coming game against Bordeaux – Pereira, Fabio, and Traore.

Time is running out for David Guion to rescue his side from relegation this season. A single win, two draws, and two defeats mark Bordeaux’s form in the last five Ligue 1 encounters. Bordeaux travels to Stade de la Beaujoire occupying the second-last position in Ligue 1 table on 27 points – five points from safety. We expect a tight encounter between these teams on sunday. Guion will resort to his trademark 3-4-3 formation to upset Nantes' quest for European competition next season. Pembele, Sissokho, Marcelo, and Elis will miss the coming match against Nantes.

FAQs about Nantes vs Bordeaux 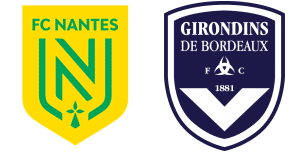 What is the kick-off for the coming Nantes vs Bordeaux?

The coming Nantes vs Bordeaux kicks off at 1600 hours +GMT

Who will referee the coming Nantes vs Bordeaux?

Clement Turpin will be the centre manager in the coming encounter between Nantes and Bordeaux.

What is the venue for the coming Nantes vs Bordeaux?