Bordeaux and Angers face each other in their third fixture of Ligue 1, 2021/22 season. We have prepared a detailed preview of this fixture, and it includes the best free predictions and match tips.

Our Best Three Predictions for Boudreaux vs Angers

At Football Whispers, you get the best and handpicked Ligue 1 predictions with the best odds sampled from leading UK bookmakers. The following are our best three tips and predictions for Bordeaux vs Angers:

Note: The odds for this game are correct on NetBet at the time of writing this preview. For updated match prices, please visit the bookmaker.

Bordeaux completed the double against Angers last season, one of which was a clean sheet victory of 2-0 on the road. The hosts won 2-1 in the reverse fixture at home, which makes them a worthy opponent in this fixture. And despite a poor start this season, losing 2-0 to newly-promoted Clermont, Bordeaux picked up momentum to bag a 2-2 draw on the road against Marseille. On the flipside, Angers have bagged two clean-sheet victories of 2-0 and 3-0 in their first two games hence very likely to score again in this game.

Home to draw or win

We don’t think Bordeaux will lose this game, especially after putting up a fight on the road against Marseille last weekend. The hosts converted their only two shots on target last time out despite having only 32% overall ball possession. Moreover, Bordeaux will want to keep their record of beating Angers both ways last season despite a poor start this season.

We are tipping Bordeaux to score first on matchday. The hosts pulled a phenomenal comeback from 2-0 down to draw away against Marseille last weekend. Notably, Bordeaux opened the scoring in the last four encounters with Angers, and it includes a club-friendly fixture that ended 1-1 back in July 2020.

Game Preview: Will Bordeaux Complete another Double against Angers this Season?

A poor start this season of 2-0 home loss to newly-promoted Clermont Foot may have dimmed hopes of Bordeaux players. But after pulling an incredible comeback to get a 2-2 draw on the road against Marseille last weekend, there is a general feeling that Bordeaux may have just found the spark that ignites their season. The hosts have been on target in five of the last six encounters with Angers. Within that duration, they recorded 3W, 1D and 2L. These teams have played against each other 17 times since January 2011. Six of those meetings ended in a draw, 7W for Angers and 4W for Bordeaux. With that, this will likely be a tense fixture with the hosts set to fight for their first victory this season. 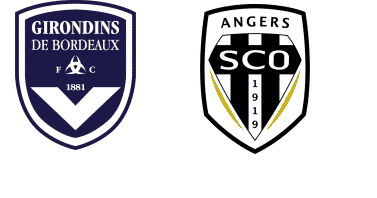 Who is the head coach for Bordeaux?

Vladimir Petkovic is the new manager for Bordeaux and hopes to get his first victory after resigning from his national role as Swiss head coach.

Who is in charge of Angers?

Angers have a new manager in Gerald Baticle who joined the visitors from Lyon U19. He has swooped two clean-sheet victories since taking over.

Where is the venue for Bordeaux vs Angers fixture?