Every club has one. The player who divides opinion but might just come good this year. Watford‘s is Stefano Okaka.

The burly forward was once one of the bright young things of Italian football. That was in the early 2000s when he was a Roma player. Okaka remained property of the Giallorossi until 2012, taking a tour of Italy with loan spells at Modena, Brescia, Bari and Parma – as well as a brief sojourn to Fulham in 2010.

He finally found his feet in Belgium and, in 2016 after bagging 15 in 37 league outings for Anderlecht, Watford spent a reported £10.5million to bring him to Hertfordshire.

Okaka's Hornets career to date is best remembered for two performances against the Merseyside clubs. The first was in 2016/17, when he scored twice in a 3-1 win over Everton including an audacious backheel flick, similar but in no way comparable to Gianfranco Zola's famous effort for Chelsea against Norwich City.

The other, on the opening day of the 2017/18 campaign, included a goal in a dominant showing in a 3-3 draw with Liverpool. Since then the real Okaka has scarcely been seen.

Frustrated at a lack of playtime, the 29-year-old returned to Italy to sign on loan for sister club Udinese in January. Six goals in 16 appearances for the Zebrette was a good return in a struggling side, though four of those came in his final two appearances with braces against Frosinone and SPAL.

Now Okaka is back at Watford. He played a half each in their two prestige friendlies against Ajax and Bayer Leverkusen during the Hornets' Austrian training camp and his involvement thus far suggests he could yet have a role to play when the season kicks off at home to Brighton & Hove Albion on August 10.

“It is always good to be back,” Okaka told the club website. “I have made a lot friends here and I’m pleased to be back for work and for pre-season.

“I feel good. I did six months in Udinese, I played near my best, scored a lot of goals, and I want to show my best in this pre-season. 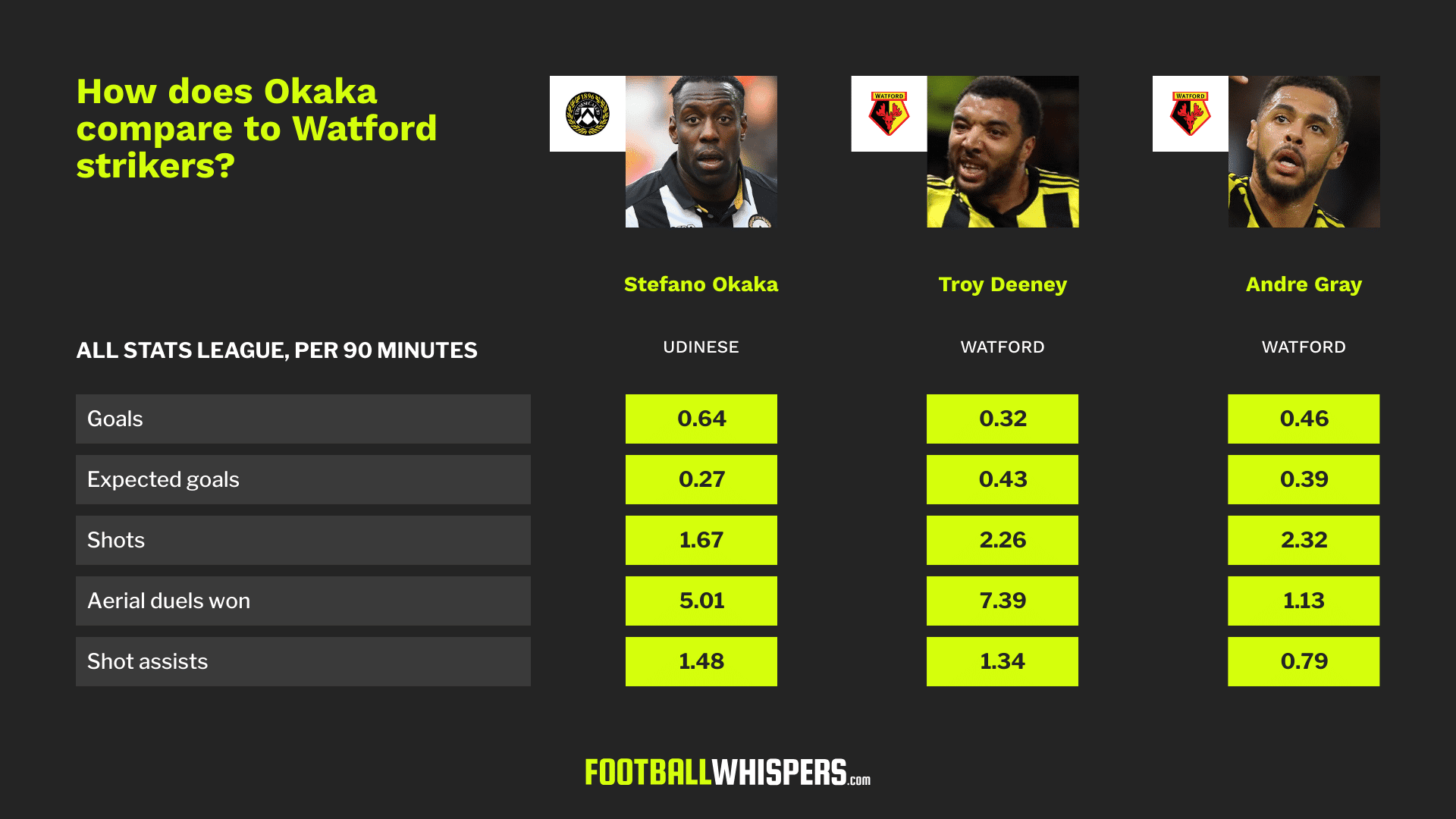 “I want to enjoy my career and I want to play as I have been in and out,” he added. “I was down after the previous coach but now I want to enjoy. We will speak with the club and see the decision for me.”

Not for the first time the odds are stacked against Okaka. Even if the Hornets have no intention of signing another striker this summer, he has Troy Deeney, Andre Gray, Gerard Deulofeu, Isaac Success and Adalberto Peñaranda to compete with for a starting berth.

Given his size it's easy to view Okaka solely as a ‘Plan B', someone to lump the ball up to in the final throes of a game where you're trying to salvage something. 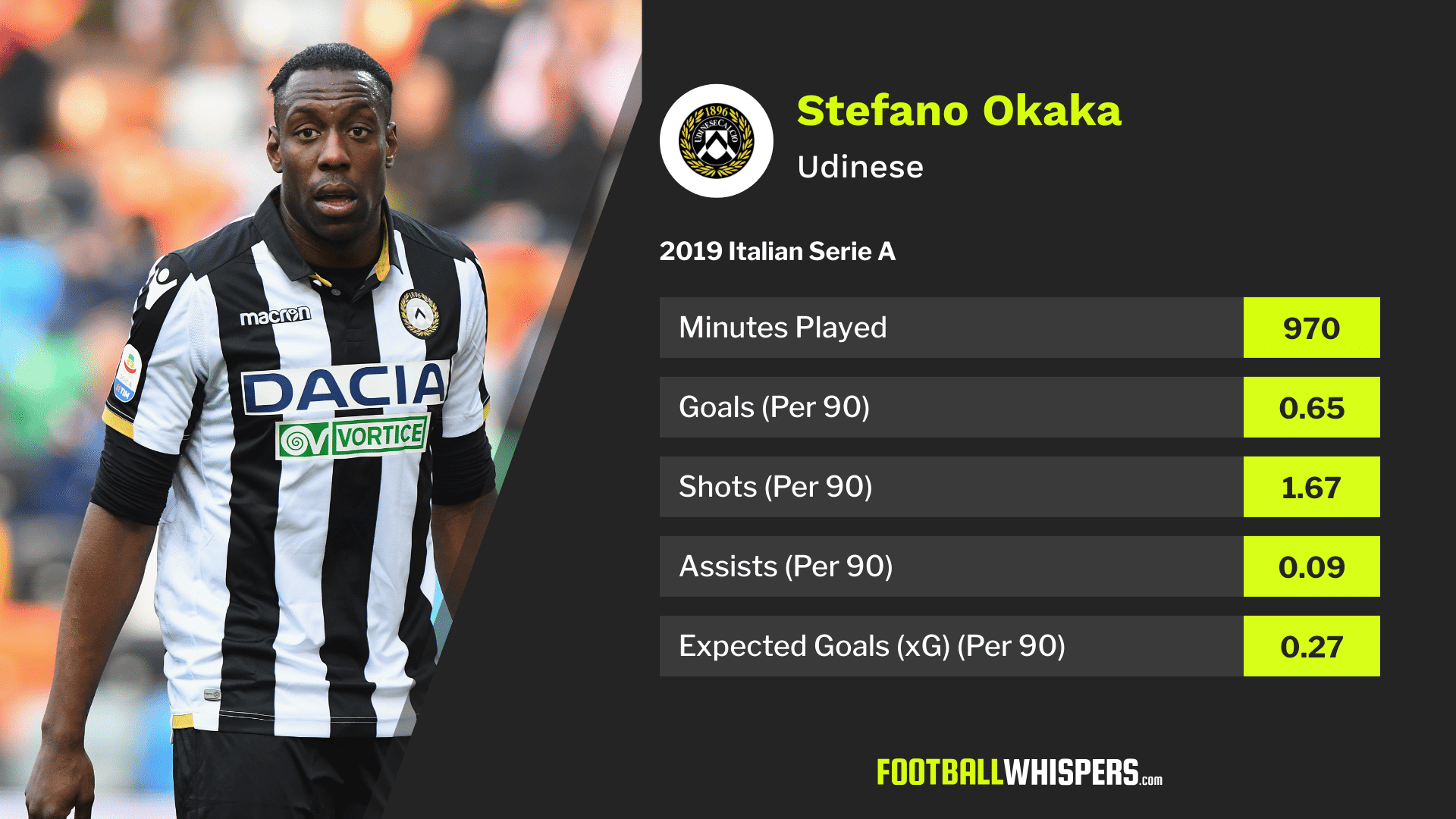 Yet his displays for Udinese suggest he has been underutilised at Vicarage Road; 11 of his 16 appearances came as starts – his Watford career has comprised just 13 Premier League starts in three seasons.

While his goal return for the Serie A side is the headline, Okaka's all-round output will be of interest to Hornets coach Javi Gracia. With 1.48 shot assists per 90 he ranked 16th in Italy's top-flight while he completed 2.41 dribbles in that period – only one forward managed more.

He looks ungainly and awkward doing so, but Okaka is surprisingly good at dropping deep and linking the play – something which might offer Gracia an alternative to the raw power of Deeney and pace of Gray, Deulofeu and Success on the shoulder of the last defender.

Okaka was also an asset defensively, winning more defensive duels than any other forward (11.01 per 90) and the sixth-most aerial duels (5.01). On top of that, he was eighth among attackers for possession turnovers (3.71) per 90.

Leaving on loan is usually the beginning of the end for Watford players who are no longer deemed to be a ‘prospect'. The club's owners, the Pozzo family, have made a career from trading players successfully and being parked elsewhere temporarily is a sure-fire way to be forgotten.

Okaka has avoided that pitfall, now he must prove his worth all over again.