Brighton & Hove Albion full-back Gaëtan Bong has made headlines recently after reporting Jay Rodriguez to the FA over alleged racial abuse in a game against Southampton in January, but the Cameroonian defender should be earning column inches for his on-field performances.

Signed from Wigan Athletic in 2015, the 29-year-old, much like Brighton as a whole, is experiencing his first taste Premier League football this season, and he's quietly become one of the English top flight's best-performing full-backs.

Brighton currently occupy 13th position in the league table – a fine effort for their maiden Premier League campaign – but the logjam below mid-table means the Seagulls are only three points clear of the relegation zone.

Chris Hughton‘s men might be sitting more comfortably were it not for their relative struggles in front of goal, with no Brighton player yet to threaten a double-figures return and the side as a whole averaging just 0.91 goals per game. 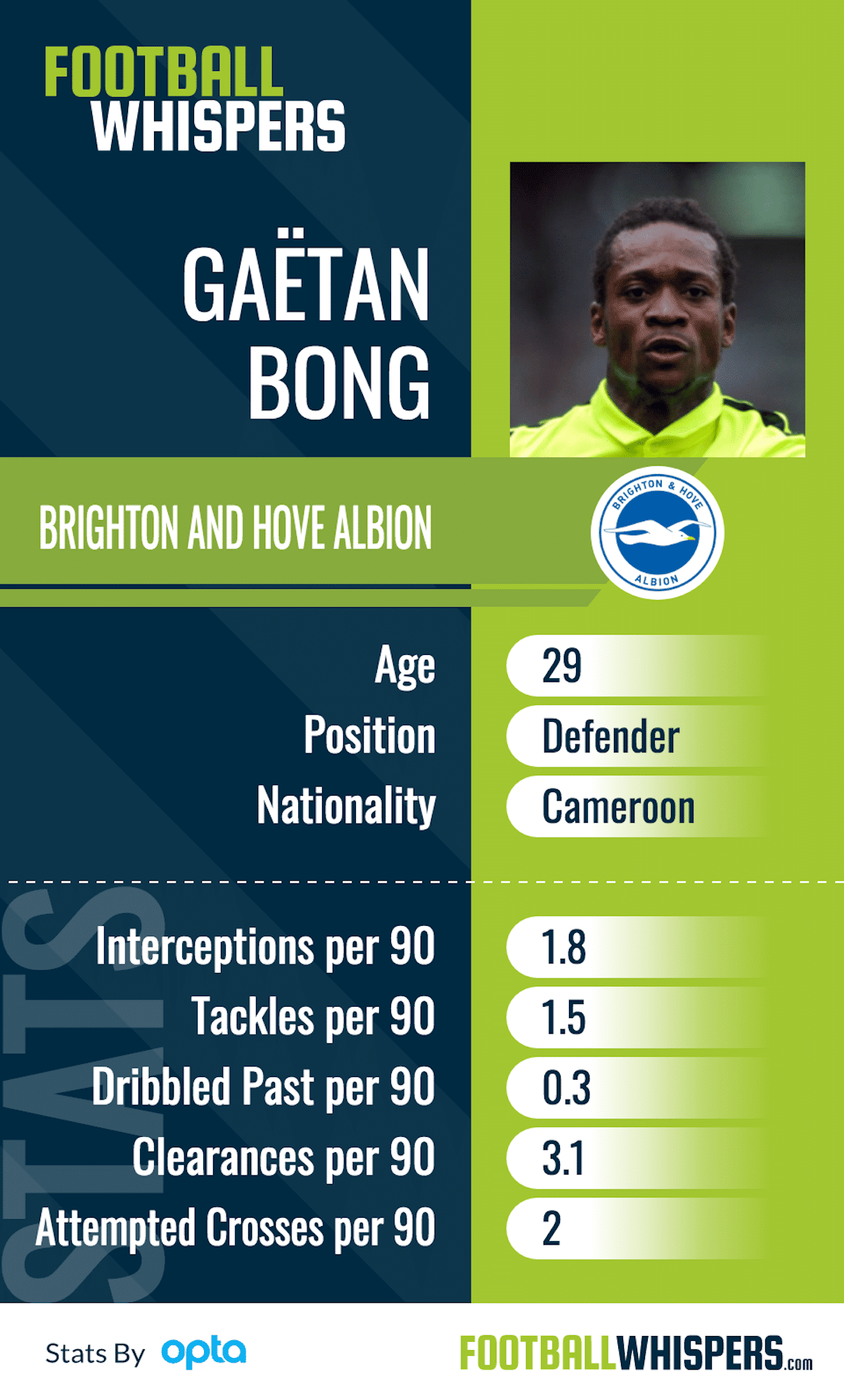 Brighton's success so far has been built on sound defensive foundations, having conceded fewer goals (35) than any team outside the top eight. Most of the plaudits for this have been reserved – deservedly so – for Hughton and his organisational ability, the protection offered by midfielder Dale Stephens, and the individual performances of centre-backs Lewis Dunk and Shane Duffy.

But Bong, who has featured regularly at left-back since October, deserves credit, too, as the statistics prove.

The former Valenciennes man is not the most adventurous full-back, fitting the traditional, defence-first model for the position, opposed to the more modern, attack-minded approach.

This is evidenced by the fact that his average of two crosses per 90 minutes, of which 0.3 prove accurate, is some way below the crossing regularity of the league's more creative full-backs.

But defensively, Bong is excelling. His average of 1.8 interceptions per 90 is the ninth-highest in the division of all full-backs with at least 1,000 minutes under their belt so far this term, while he is also chipping in with a respectable 1.5 successful tackles per 90.

These numbers show a proactive approach to defending, reading the game well to steal possession or halting the progress of an opponent with a timely tackle. But the 12-cap Cameroon international has proven he can defend reactively, too, making 3.1 clearances per 90 – an average which ranks him 13th of the Premier League's full-backs with 1,000 or more minutes to their name.

The most impressive of Bong's stats, however, and one area in which no full-back in the league can top his performance, is his average of being dribbled past just 0.3 times per 90 minutes. This, combined with his solid tackles numbers, shows Bong is an excellent one-v-one defender, rarely outfoxed by a tricky winger when challenged.

He may not be the most eye-catching full-back in the Premier League, but Bong might just be the most underrated.