While new signings are often cause for excitement for supporters, Boli Bolingoli-Mbombo‘s arrival at Celtic will be tinged with sadness as it surely means the end of an era for a boyhood Hoops fan and stalwart.

The £3million deal for the former Rapid Vienna left-back precedes the long-anticipated departure of Kieran Tierney, the homegrown defender who is wanted by Arsenal and Napoli.

The 24-year-old insists he did not ask whether he would be first-choice for Neil Lennon's side this season after Honduran back-up Emilio Izaguirre left Parkhead for a second time when his contract expired.

“It's always healthy competition to have a colleague like this player. He is a good player, I have heard a lot of positive things about him.

“I am always open for healthy competition and if he stays we will work together and try to give everything to the club.”

Whether it's this window or next, the Belgian will be expected to succeed Tierney. Even if Arsenal fail to meet Celtic's asking price this summer, someone will swoop for the Scotland international sooner rather than later.

So who is Bolingoli and why have Celtic identified him as the heir to fans' favourite Tierney? We've run the rule over the Scottish champions' third signing of the summer…

If you think you've seen the name Bolingoli before, congratulations on your observation skills. The Belgian full-back is the cousin of and Lazio defender Jordan Lukaku.

And the Celtic new-boy believes he is actually the best of the trio. “They are a bit stronger and more physical than me, but I think technically I am the best in the family,” he said in a recent interview.

“There aren't that many similarities between us, except maybe I am faster than them!”

Born in Antwerp, Bolingoli started out with Beerschot AC before joining Club Brugge in 2009. He made his professional bow with the 15-time champions of Belgium and racked up 64 appearances while also taking in a loan spell at Sint-Truiden in 2017/18.

Having impressed for the Blauw-Zwart he joined Austria's Rapid Vienna in 2017 and, ironically, debuted against Celtic before going on to make 72 appearances in two seasons.

What are Boli Bolingoli's strengths and weaknesses?

For a start he is, quite literally, strong. His stocky build makes him hard to dispossess and enables him to carry the ball forward – something he does regularly. His 1.87 attempted dribbles per 90 last season ranked fifth among defenders in Austria's top flight while he was eighth for completions with 1.03 per 90.

Unsurprisingly given that skillset, Bolingoli can play further forward as a winger and regularly did last season.  With 1.99 touches in the opposition's box per 90, only one ‘defender' in the Austrian Bundesliga managed more.

While that versatility could prove useful, it's at left-back he will expect to be deployed – especially if Tierney moves. His numbers do not make for particularly impressive reading. However, that should not be a huge concern to Celtic supporters as attempting to compare the Scottish Premiership to Austria's top flight is fraught with danger.

However, when playing for the dominant side in Scotland it's not defensively he will be tested most weeks. Former Austrian international Roman Wallner has watched Bolingoli over the last two years and believes the defender will adapt well to Scottish football.

“He is in good physical condition, is a very technical player. He always likes to get forward. He has a lot of power,” he explained.

“I think the way he plays, with a lot of enthusiasm, will mean the fans will really like him.

“He will be good for Celtic in the Scottish league because he is fast and physically strong and also decent technically.”

How does Bolingoli compare to Tierney? 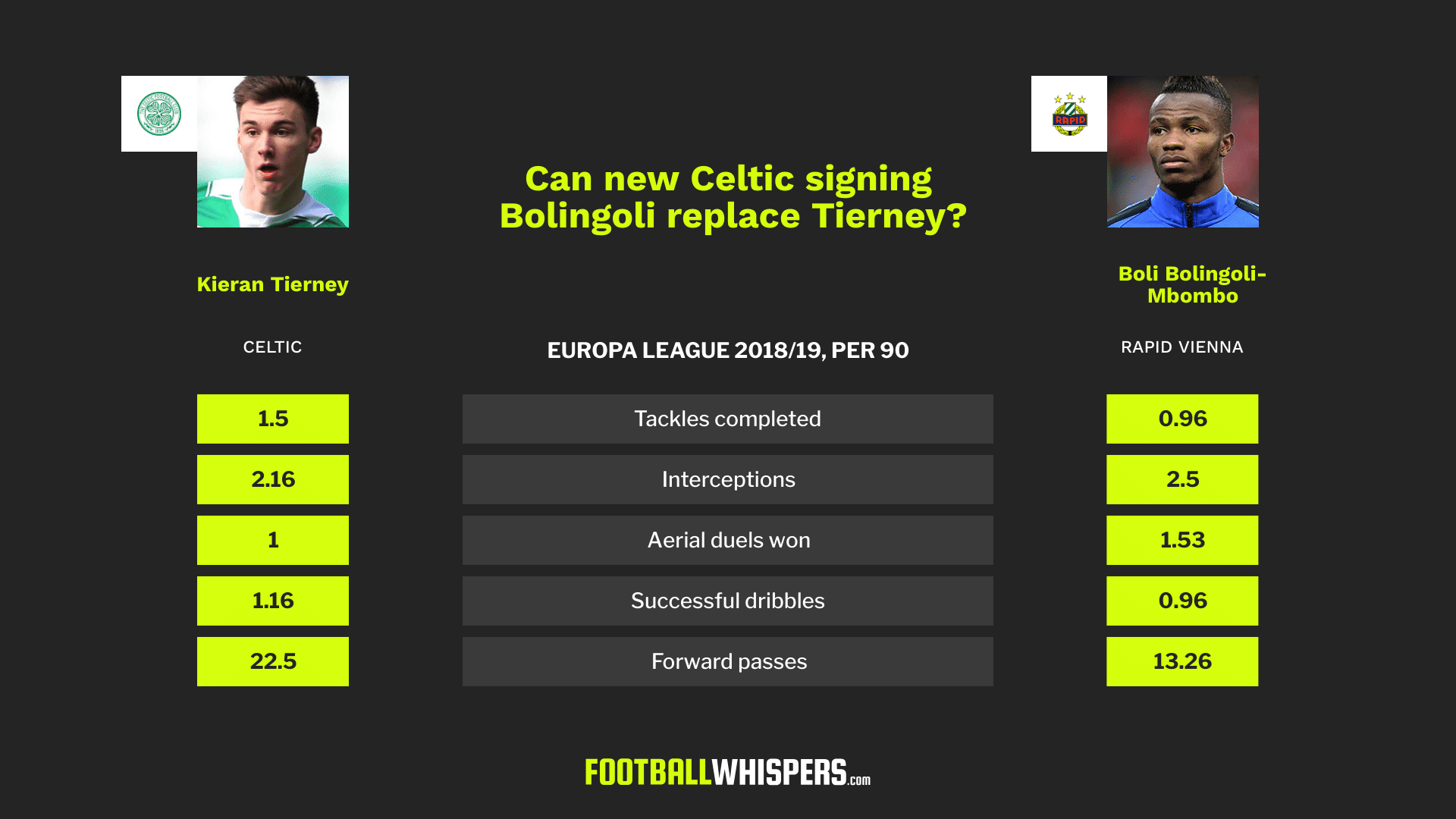 Given the relative levels of strength of the Austrian Bundesliga and the Scottish Premiership, we've taken Tierney and Bolingoli's Europa League data to draw comparisons from instead.

This isn't entirely surprising given the Belgian's physical prowess, while he also spent a good number of minutes playing further forward as a left winger, putting less emphasis on winning the ball back. That also accounts for Tierney completing more forward passes than the new Bhoy, as he was stationed further back more often than not.

There is evidently room for Bolingoli to improve but replacing someone as popular at Parkhead as Tierney is was never going to be straightforward.

In Bolingoli, Celtic have found a successor with the physical and raw attributes. If he enjoys half the success KT has at Celtic, he'll become a bona fide Bhoys legend regardless.