It’s not often Celtic can bag themselves a £25million-rated winger but the Bhoys could be about to do exactly that. According to various reports, Neil Lennon wants to add Yannick Bolasie to his squad.

The Everton winger is surplus to requirements at Goodison Park after Marco Silva’s summer of spending saw him add Alex Iwobi and Moise Kean to an already stacked forward line containing Theo Walcott, Richarlison and Bernard.

The 30-year-old split his 2018/19 campaign evenly, spending the first half of the season on loan with Aston Villa before making the switch to Anderlecht on February 1st.

It was in Belgium the former Crystal Palace star rediscovered his groove and he showed glimpses of why Everton paid £25million to sign him during the summer of 2016.

Bolasie has failed to live up to the price tag during his time on Merseyside, scoring just twice in 32 appearances for the Toffees.

The spell with Anderlecht, where he involved himself in nine goals in 17 appearances, showed he still has something to offer. A move to Parkhead could be what is required to reignite his career.

The switch would allow Bolasie to put himself in the shop window and benefits Celtic as they would acquire a game-changer who could make the difference in European competition. It’s a win-win.

There's an argument to be made to suggest Lennon doesn't need to any more firepower to his side. In the two Scottish Premiership games this season, Celtic have notched 12 goals and already have a +10 goal difference.

Three players already have two or more goals while six have scored in total. But what Bolasie brings to the team is more than goals. It's more than assists, too. 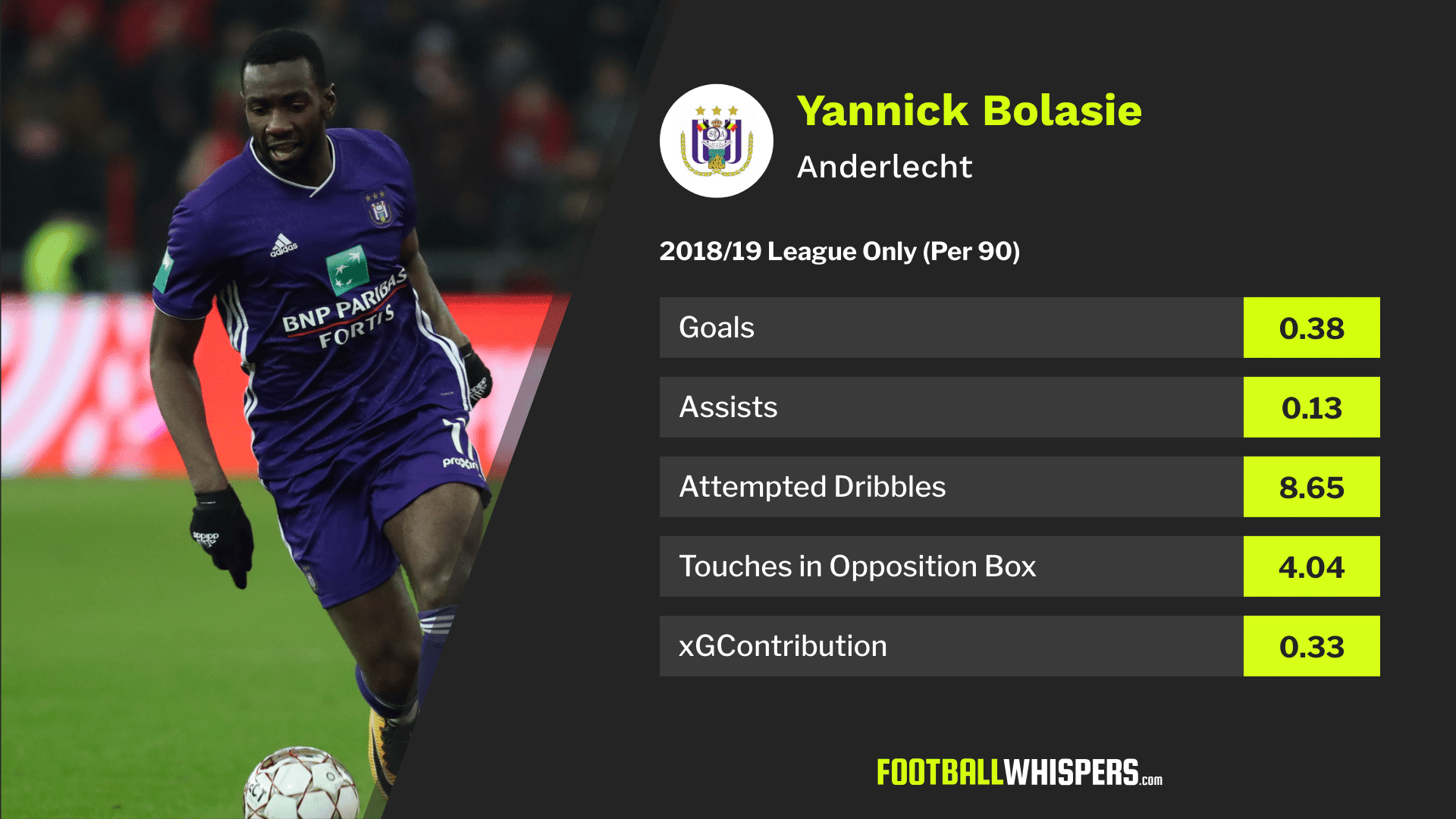 He's an aggressive ball-carrier who thrives in one-on-one situations. Though the same could be said for James Forrest, the 28-year-old lacks the same presence as Bolasie.

The Scotland international was also unable to match the 8.65 attempted dribbles per 90 the 33-cap DR Congo international managed during his time in Belgium.

Bolasie also completed over 50 per cent of his dribbles, which shows just how devastating he can be when up against a defender.

If he was able to replicate those numbers at Celtic the Bhoys would have someone who could rival Scott Sinclair and Lewis Morgan for a start on the left side of the attack.

He's also adept on the right and he'd probably be able to do a job centrally in the Scottish Premiership, especially alongside Odsonne Édouard.

While Bolasie outperformed his underlying numbers for Anderlecht, he was still a regular and constant goal threat.

He averaged 0.51 goals and assists per 90 from an expected goals contribution average of 0.33. Such an overperformance can be a red flag on occasion, even more so when it's a small sample size, but when you look at the goals he scored it's clear to see they're repeatable.

Half of his goals were headers, which are not weighted as high as normal shots in expected goals models. Bolasie was in dangerous areas, usually lingering at the back post, to nod home. All of his strikes for the Belgian's arrived inside the penalty area as well, another positive sign.

This is the point made earlier about his presence. Bolasie does all the things expected from a wide forward in the modern game but has another dimension because he's such an aerial threat.

If Celtic do manage to land him on loan he could be one of the signings of the season. Not just in Scotland but across Europe.