It’s an unlikely road-trip, Gareth Southgate and Steve Holland pootering around Russia deciding on the best way to set England up at the World Cup.

It was 2017, Holland had just left Chelsea after a year under Antonio Conte during which the Blues had won the Premier League with an innovative back three system. That this was the time when the new England manager and his assistant decided that that was the way forward for the Three Lions is surely no coincidence.

Still, Holland indicated to the English media earlier this week that there were several things that went into that decision.

Taking from the champions

It might be a quirk of fate or it might be more telling that those two sides are the ones with the most representation in the starting XI for England’s opener, with three each.

Aside from the back three, the next most obvious inspiration – and one mentioned by Holland to the media – is Kyle Walker’s inclusion in it.

While Walker has been playing, on paper, as a full-back for Manchester City this season, his time under Pep Guardiola has made him no stranger to drifting inside to defend more centrally.

“We’ve watched Manchester City a lot this year,” Holland said, “and Kyle hasn’t played like he did for Tottenham the previous three years.

“He hasn’t spent all his time 30 to 40 metres down the touchline. He’s been controlling defensive counterattacks.

“I’m not sure whether we’re arguing about 20 metres here or there, but we’re not asking him to play behind the [opposition] forward. He’s more or less playing where he has for his club all year and been a champion.”

The change in Walker’s role between 2017/18 and 2016/17 is clear. Walker made almost double the amount of passes in his first year in Manchester than his last season at Spurs, while making fewer take ons and key passes, the kind of things you’d expect a traditional full-back to do. 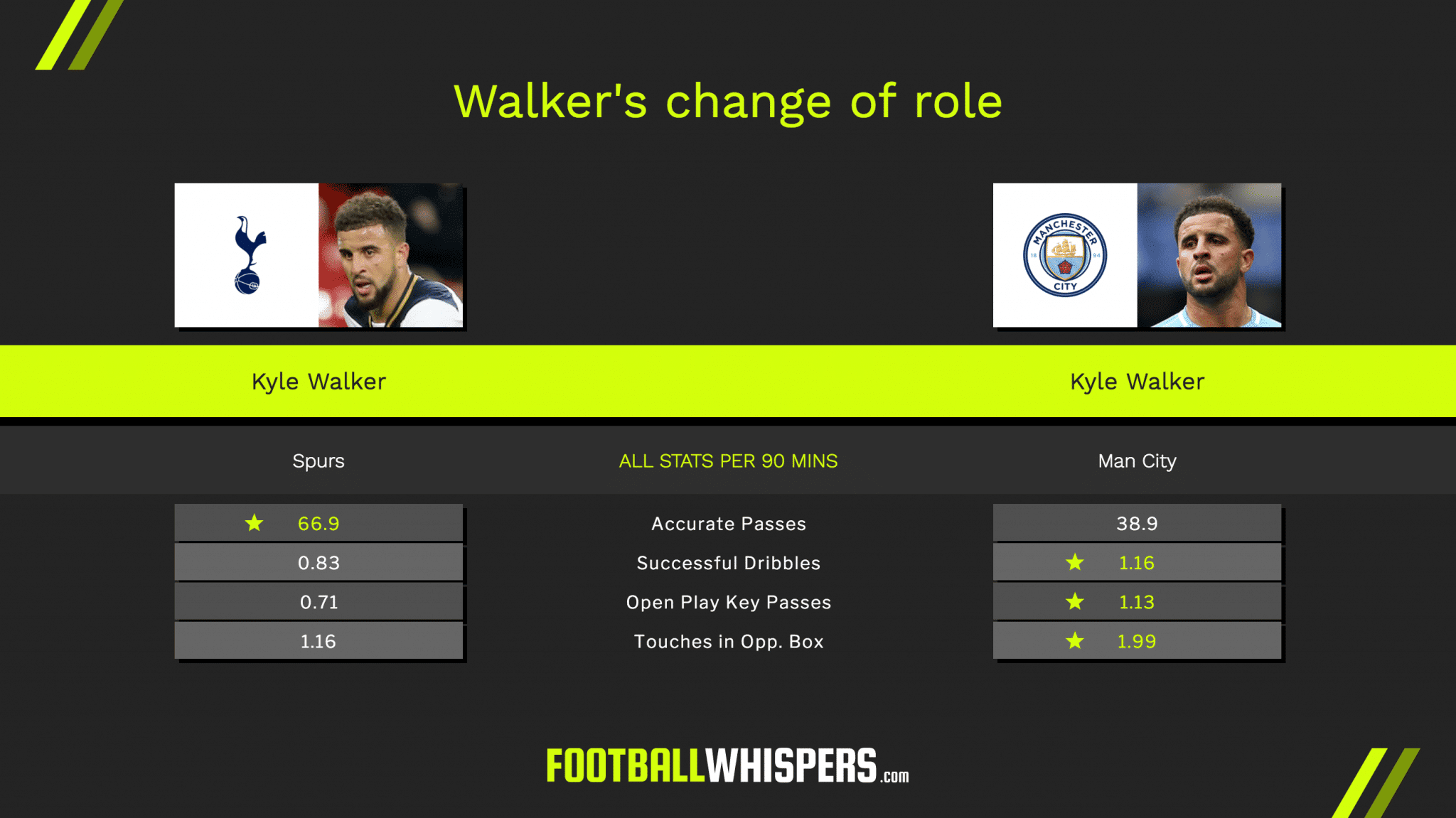 
Another thing England have taken from Manchester City is the use of Raheem Sterling as a second striker. On the occasions Guardiola used a 3-5-2 with the Premier League champions, it was generally Sterling playing as an accompanying, linking forward alongside Sergio Agüero.

This is pretty similar to his role alongside Harry Kane for England, helping Dele Alli and Jesse Lingard to bridge the gap between the midfield and the attack.

And finally, there is the counter-pressing that Southgate’s side do when they lose the ball. The extremes of pressing are harder to put into practice at international level than with clubs because of the lack of time to train together – an intense press is a collective thing, and falls like a house of cards if one bit fails.

However, international sides have worked out how to bring aspects of pressing to the World Cup, using a couple of choice pressing triggers or counter-pressing more briefly than they would at club level.

England used this to great effect against Tunisia, and this – coupled with the Tunisians' desire to play out from the back rather than going long – was a large part of why so much of that game was played in the Tunisia half.

Four years ago this probably wouldn’t have been possible. But the squad is now full of players who get it.

They play under pressing systems for their clubs – under Mauricio Pochettino, Jürgen Klopp, Guardiola – and many of those lessons can probably be transplanted whole from one team to the other. It wouldn’t be surprising if in-depth analysis of England’s pressing showed heavy similarities with traits of the main pressing Premier League sides.

It would give too much credit to club managers – and not enough to the players or Southgate and his team – to say that the success of these coaches is why England suddenly have an exciting side, but the national men’s team has borrowed heavily from their work.

The tactical system is an exciting Frankenstein of the best parts of the Premier League.