Top free betting tips and odds for Bochum vs Furth

Promoted Bochum take on the challenge for fellow upstarts Greuther Furth in Round 25 of Bundesliga action. While the hosts are enjoying their stay in the German top-flight football, the Cloverleaves are slated for a swift return.

Greuther Furth has shown some resilience since the turn of the calendar year but it has not been enough. Bochum will surely look to add to their woes as they eye a top-ten ranking. The Cloverleaves are winless in 12 away fixtures this season, tasting defeat on 11 occasions. Their last two meetings finished in favour of Die Unabsteigbaren and we expect the trend to continue.

Bochum and Furth have been plying their trade alongside each other for quite some time. They are well versed with each other and have exchanged goals frequently. Three of their last five outings saw both sets of attackers get on the scoreboard and this meeting should not be any different. With 8 and 7 goals to their names respectively in their last five outings, goals should be observed at either end of Vonovia-Ruhrstadion.

Bochum vs Furth: Check out the best odds and the latest stats

Bochum vs Furth: Check out the team lineups

Despite keeping level with Freiburg in the 90 minutes of regulation action, Bochum bowed out of the DFB Pokal in extra time. Die Unabsteigbaren will want to improve on their result as they look for their first win in three competitive fixtures. Their task has been made simpler as struggling Greuther Furth visit them.

Heading into the final 10 fixtures of the 2021/22 season, Greuther Furth are all but certain for the drop. They are rooted at the bottom of the points table with the next closest outfit five points ahead. With a defence that has conceded 62 goals thus far, they are playing for pride at this moment.

Questions About Bochum vs Furth 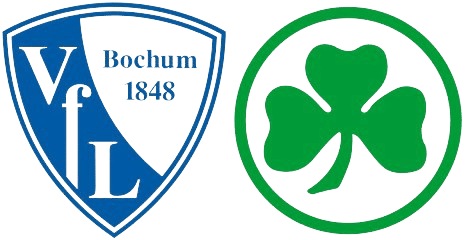 Where is the game being played? Vonovia-Ruhrstadion.