Boca Juniors vs Barcelona in group C might be one of the biggest matches of the week with the hosts under enormous pressure to get a result. If they fail, it could well be curtains for their Copa Libertadores campaign. Will they take things to the final game? Find out with our Boca Juniors vs Barcelona match preview with free tips, predictions and odds mentioned along the way.

Boca Juniors vs Barcelona: Let's get ready to bet

Boca Juniors have lost their last two matches in the Copa Libertadores, which means they simply have to win this match if they want to keep their qualification hopes in their own hands. That won't be easy though because Barcelona have only lost twice this year. The big positive for Boca Juniors is that the game comes at the right time for them; they had lost three on the bounce but then beat River Plate on penalties for an almighty boost. Barcelona meanwhile lost last time out in this competition showing they can beat got at. The chips will be firmly down when this match kicks off. The necessity of a win combined with the fact that Boca Juniors are unbeaten in their last six at home means we think they'll get the result they need.

We've touched on Boca Juniors' patchy form in our first prediction but they don't lose many matches on their own turf. In fact, they've only lost one game at home this calendar year and their last six reads as recording five wins plus a penalty shootout victory over River Plate last time out. The last three of them have seen under 2.5 goals. As for Barcelona, four of their last five away games have seen fewer than three goals. Given this game will likely be a hard battle in Buenos Aires, a low-scoring match is highly plausible.

Since coming back to Argentina, Carlos Tevez hasn't found the shooting boots he had in Italy and England but he did manage to pull his side to a win in their last group stage home game against Santos with a goal and assist. His mini hot streak doesn't end with one game though. Tevez also scored in Boca Juniors' last game, which was the derby against River Plate; he bagged from the spot in the shootout too. Despite his advancing age, a confident and in form Tevez means Boca Juniors will have a strong attacking option that can decide a game with one unexpected move or moment of inspiration.

Boca Juniors vs Barcelona: The all important stats

Group to go to final match

Group C is very much in the balance. After game week five, the group's top two could be done and dusted or it could be all to play for in the last match. Both games due to take place will factor into that but Boca Juniors vs Barcelona is the biggest one. Barcelona would take a draw now whilst Boca Juniors simply have to win or, probably, face a pretty big mountain to climb with respect to goal difference in the last game. Even then it might not be enough. That means the time is now and we are here for it! 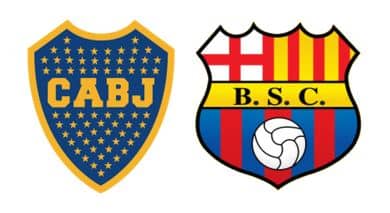