Two Palmeiras goals early in the second half threatened to deprive the football world of a unique historical moment.

Trailing 2-0 from the first leg and 1-0 down in the return fixture, the Brazilians, chasing four goals in order to progress to the 2018 Copa Libertadores final, came out swinging. But Boca Juniors regained control and composure, sealing a comfortable 4-2 aggregate victory thanks to substitute Darío Benedetto's 70th-minute strike.

Boca, for the first time ever, will face bitter cross-Buenos Aires rivals River Plate in the final of South America's most prestigious tournament.

River's passage to the Suerpclásico showdown was less straightforward. They required a controversial, VAR-awarded penalty in the fifth minute of a 14-minute injury time period to secure an away-goals win over defending champions Grêmio.

The Argentinians lost the first leg 1-0 at their El Monumental home, and referee Andres Cunha required protection from armed police after he awarded the decisive spot-kick in the dying stages at the Arena do Grêmio.

“There is no favourite, this will be a Superclásico like no other,” insisted Boca striker Ramón Ábila after his side saw off Palmeiras. “Now it is 50-50 chance of winning the trophy.” 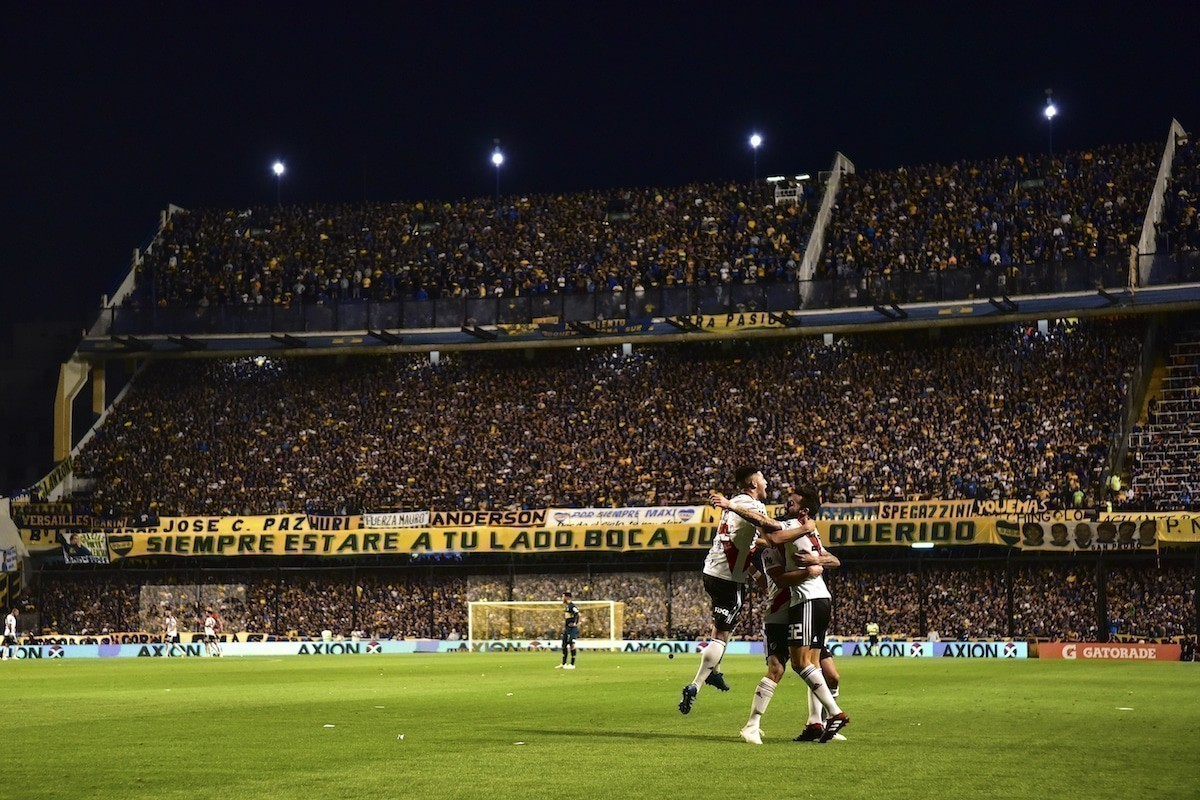 While this Libertadores final meeting between the two Argentinian powerhouses is a first, it is also a last: the South American Champions League equivalent's final will switch to a one-off fixture at a neutral venue from next season, meaning Buenos Aires' two most famous footballing arenas will be the last to host home games in the continent's showpiece.

At the time of writing, there is still uncertainty over whether away fans will be present at either game. Travelling supporters have been banned in Argentina since 2013 due to severe hooliganism in the country. However, Mauricio Macri, Argentina's president, after backtracking on his initial proclamation that away fans would be allowed to attend the Libertadores final, now says it is up to the clubs to decide on the matter.

Although this will be the first time Boca and River have met in a Libertadores final, they do have previous in the competition. In 2000, Boca – who are aiming for a record-equalling seventh triumph this year – hammered River 5-1 on aggregate in the quarter-finals, and they again overcame their rivals, this time on penalties, in 2004.

River won the most recent Libertadores Superclásico, though, in a game marred by crowd violence. After a 1-0 River home victory in the first leg of their 2015 last-16 face-off at El Monumental, Boca fans, during the Bombonera reverse fixture, broke a hole in the protective barrier that shields the players on their way to and from the pitch and launched home-made tear gas into the tunnel. The game was abandoned and CONMEBOL, South American football's governing body, eliminated Boca.

Even if the clubs and authorities decide to err on the side of caution and allow only home supporters into each fixture – with Boca hosting the first leg on November 10, then River the return on November 24 – the atmosphere will be electric inside these unique footballing cauldrons.

Boca's Bombonera is crammed into a deprived, dock-side part of the city, while River, nicknamed Los Millonarios – The Millionaires – moved from nearby to a more affluent area in the 1920s, and the class divide still plays a major part in this grand rivalry's hostility.

La Bombonera, with its dissociative D shape and steeply tiered stands, is instantly recognisable and renowned as the home of one of the most atmospheric matchday experiences in the game. River's bowl-shaped Monumental presents a similarly impressive spectacle, offering a breathtaking vista when fans drape the stadium in red and white streamers.

Reigning champions and runners-up respectively, Boca and River have made slow starts to the current Argentinian Primera División campaign. After 11 games, Racing Club lead the way while Boca trail in sixth place, with just one win from their last five games; River, having played one game fewer, are down in ninth.

Despite trailing Boca in the standings, though, River may enter the Libertadores final the more confident team, having beaten their rivals 2-0 in September's league Superclásico at La Bombonera. Boca have a slight historical edge, however, with 88 derby wins to River's 81.

With both the money and focus of the footballing world shifting increasingly towards Europe and the Champions League, a Libertadores final between Argentina's two biggest clubs, who enjoy one of the game's fiercest and most famous rivalries, gives South America the chance to reclaim the spotlight.