It’s that time of the year again.

No, not the most wonderful time of the year but the time of year when Liverpool fans start to question Roberto Firmino. The enigmatic Brazilian isn’t in the best goalscoring form having netted just once in his last 11 starts for the Reds. The assists have dried up, too, with the 28-year-old only adding two to his tally during that period.

In the win over Watford, the former Hoffenheim maestro missed multiple chances to put the game to bed. It’s been a bit of a common theme over recent weeks. Firmino is regularly getting into good areas but he’s just struggling to convert these efforts. Team-mates are bailing him out but there may soon come a point that the No.9 costs the table-toppers all three points.

And given the current game centres around quantifiable stats, the lack of goals and assists since the October international break make him a prime target when things aren’t going to plan on the pitch. The likes of Mohamed Salah and Sadio Mané can afford to be inconsistent in general play because the duo chip in with vital goals when it matters most.

However, this isn’t the first time Firmino has been criticised. It’s a yearly event now with the fleet-footed attacker failing to ever hit the heights of Salah and Mané in terms of goals.

His return of 15 in the Premier League during the 2017/18 campaign was his most prolific to date but pales in comparison to Mane’s all-time high of 22 and Salah’s league record of 32.

Talk inevitably turns to whether the Reds need a pure goalscorer leading the line in place of the Brazil international. Arguments are made for this with Timo Werner regularly getting a lot of vocal support on social media. The German is in the form of his life under new manager Julian Nagelsmann. RB Leipzig currently lead the way in the Bundesliga and only Robert Lewandowski (18) can better Werner’s return of 16 from 15 starts. 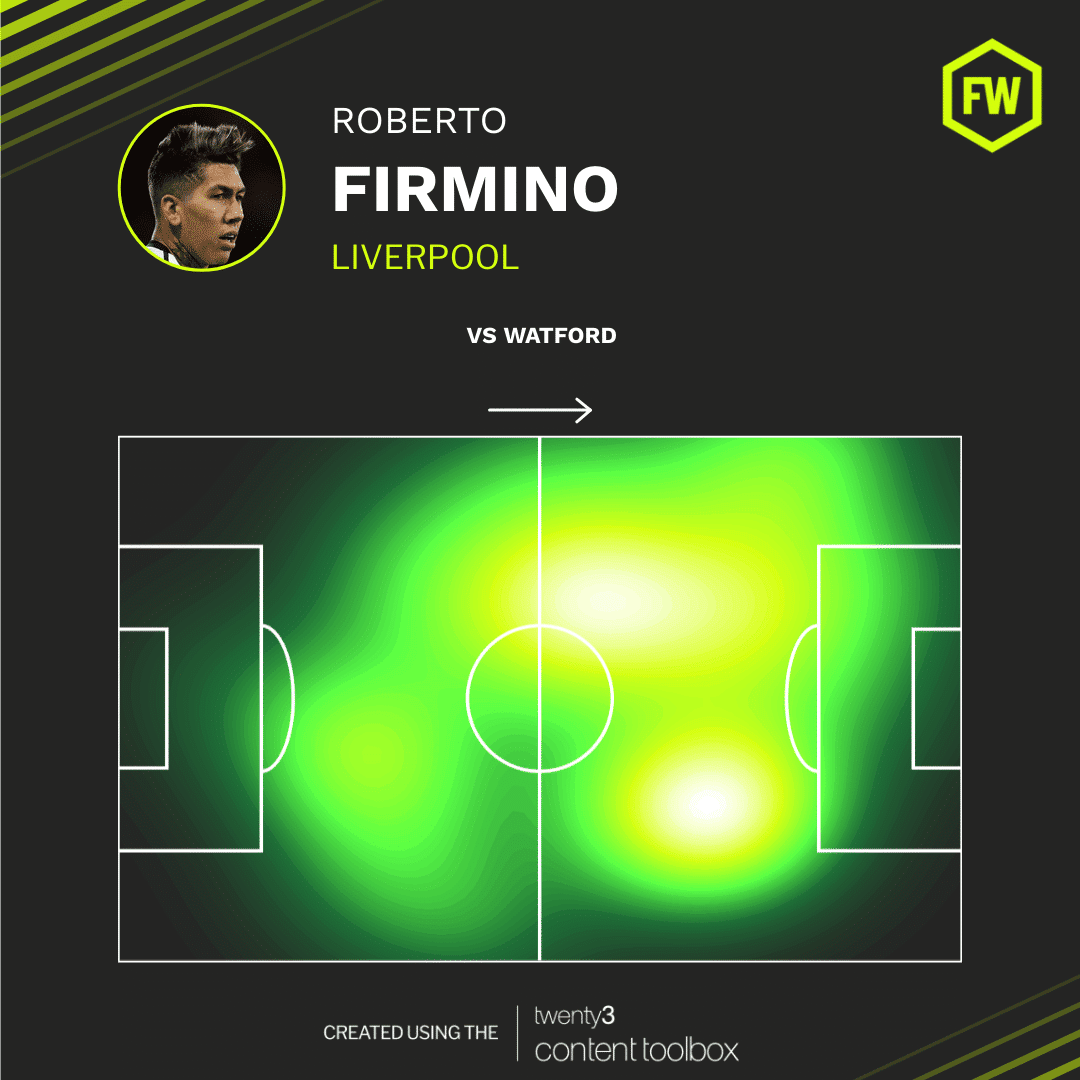 Reports in Germany hint at a relatively affordable release clause in the 23-year-old’s deal and Liverpool have been linked by a number of outlets over recent weeks. While the German international would be a welcome addition at Anfield, if he was deployed in the Firmino role he’d be a waste of money.

It’s been said countless times in the past and it’ll no doubt be mentioned many more in the future but there’s nothing traditional about Firmino as an attacker. So simply looking to sign someone who scores more goals isn’t going to cut it. They, the new striker, might find the back of the net with more regularity but it’d come at the expense of Mané and Salah.

Firmino is a facilitator. He manipulates space and the opposition to create opportunities for team-mates. He does a lot of defensive work so others don’t have to and he’s the sole reason Liverpool can, on occasion, shift to a 4-2-3-1 shape. The Brazilian is one of the few players in the world who can play as a centre-forward, as an attacking midfield and as a centre-midfielder. When playing as the man behind the striker for the Reds, he has to do all three things. 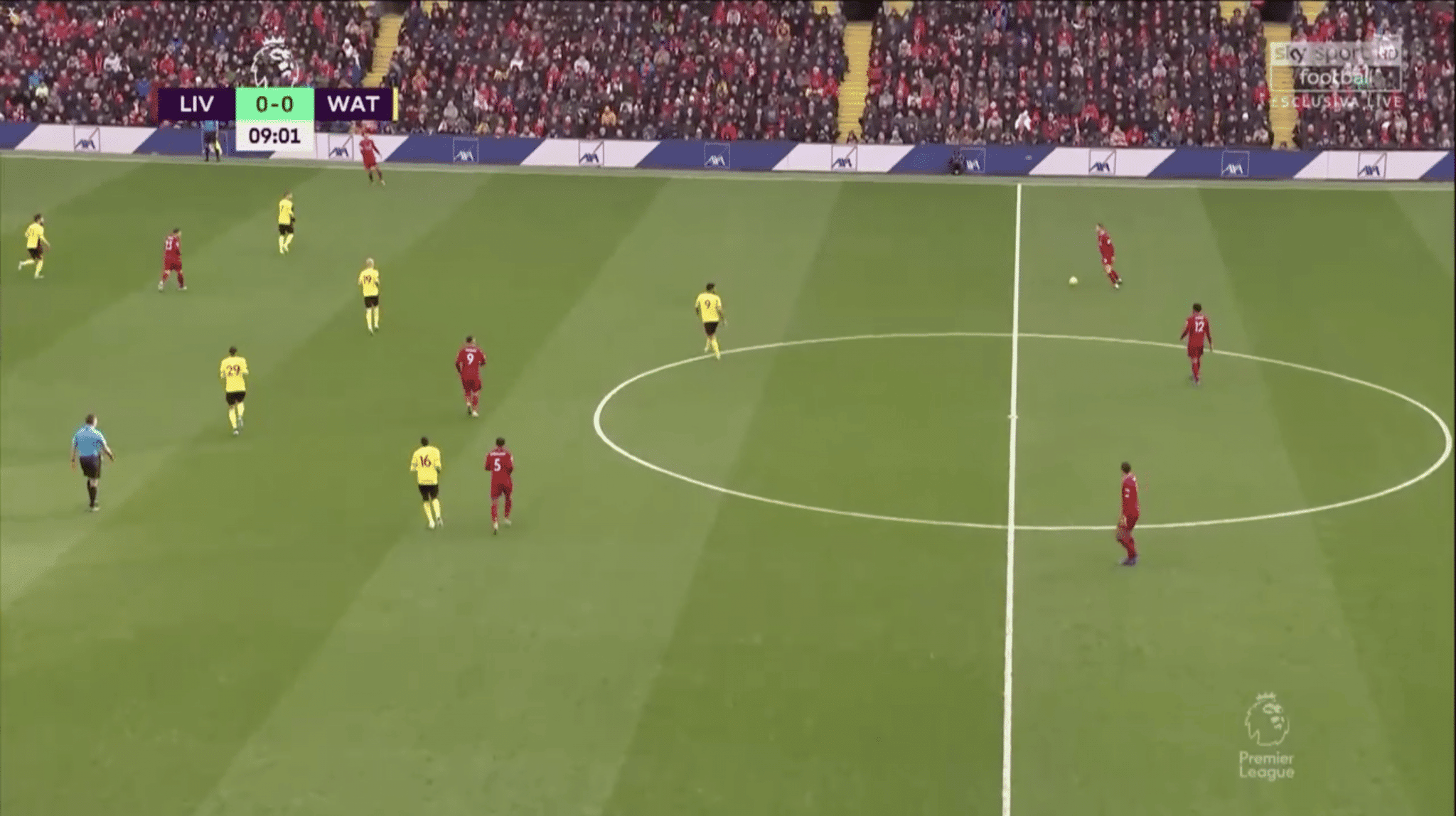 The still above shows why Firmino is so crucial to the team, even when he isn't scoring. Against Watford, Liverpool went 4-2-3-1 with Jordan Henderson and Gini Wijnaldum as a midfield two. With Trent Alexander-Arnold and James Milner pushing on to act as wingers. Xherdan Shaqiri and Mané would tuck inside. During the build-up, Henderson would drop into a right centre-back role and this would leave Wijnaldum in midfield.

If Firmino didn't drop to support the Dutchman, the balance of the team would've been all wrong. Furthermore, Firmino brings a lot to the middle third of the pitch. He's press-resistant and progressive in play. The Hornets regularly looked to put pressure on the hosts on Saturday but the No.9 had a huge role in the Reds keeping possession.

He didn't see a lot of the ball, attempting just 33 passes on the day, but he kept things ticking over. He completed near 80 per cent and he played one key pass. Firmino attempted five dribbles and completed three of them while also winning three of the five tackles he attempted.

It was a similar story against Red Bull Salzburg, too. Jürgen Klopp gave Naby Keïta something of a free role but this was only allowed to happen because Firmino was doing a lot of work in midfield.

The hosts on the night looked to press. Liverpool, initially, found it difficult to get on the ball and this is what forced the switch, with Klopp moving Keïta into more of a number ten role. To balance that, Firmino started dropping deeper to get on the ball. Salzburg would then look to shut him down and this would create space elsewhere. 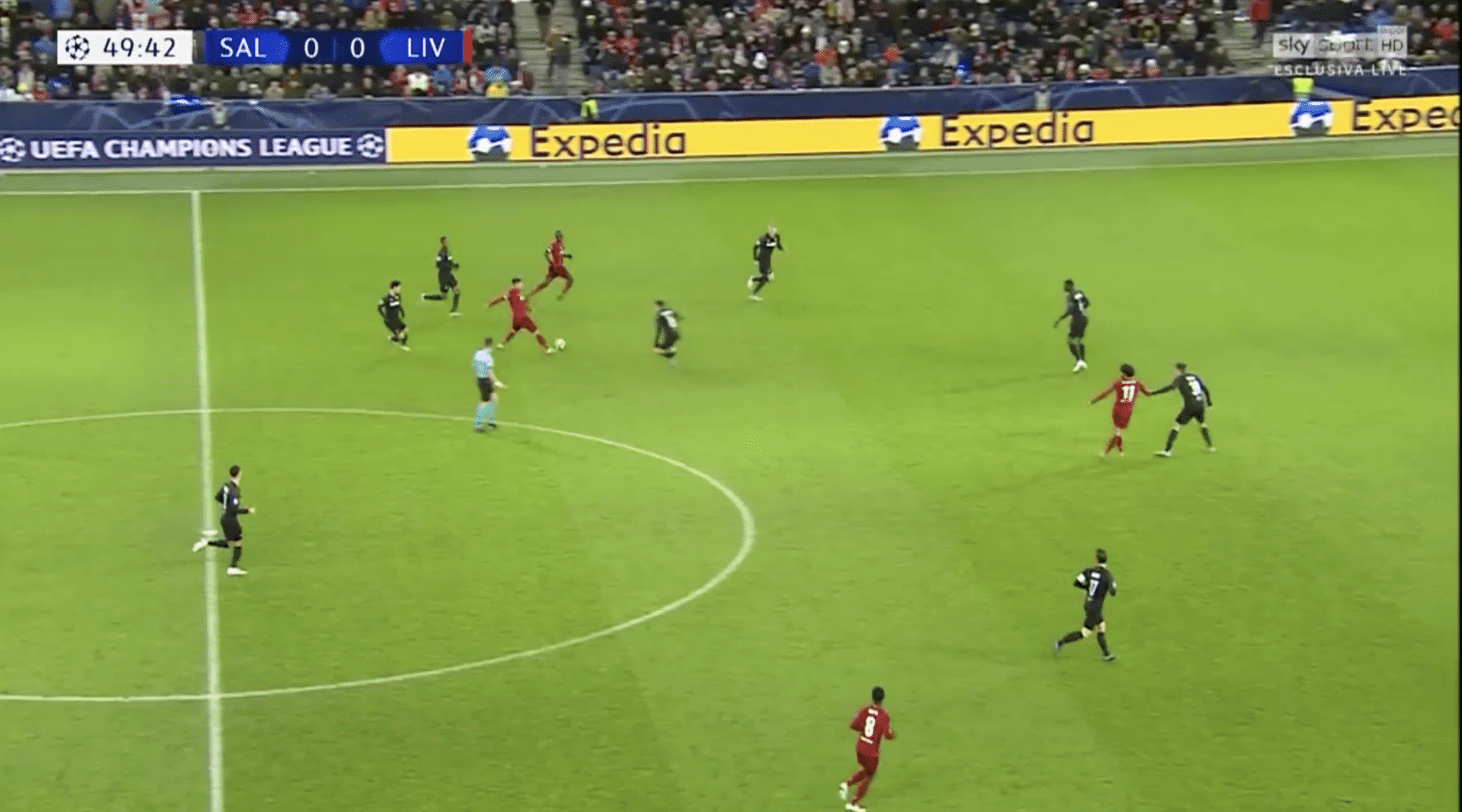 An example of this can be seen above. Firmino picked the ball up in his own half and proceeded to carry it forward. He evaded a challenge and forced even more opposition players to front him up. The still shows the moment prior to him popping the ball off to Mané.

The Brazilian continues his run forward and receives the pass back from the Liverpool No.10.

The Salzburg centre-back is forced to vacate his position to close him down but he's not quick enough to stop the first-time pass into the space where he would normally be. Salah latched onto the ball but the keeper gets a vital touch just as he's about to knock it round him.

As the ball leaves Firmino's foot, Liverpool have a three vs three situation. And it all comes about because of the ex-Hoffenheim man.

The goals aren't there. The assists have dried up, too, but the No.9 is still important to this Liverpool side. In fact, his versatility probably puts him at the top of the list. Could he be better? Yes. But the Reds couldn't get better than him in this role.