Until Sir Alex Ferguson’s Manchester United dominated the opening two decades of the Premier League era, Liverpool were top dogs in terms of English football history. While Anfield has been home to many legends over the years, the Merseysiders have one man to thank more than any other: Bob Paisley.

Having made over 250 league appearances, and winning one title, as a Liverpool player, Paisley spent 14 years as the assistant to Bill Shankly. Following Scot’s retirement in 1974, Paisley took the main job. Over the next nine years, he would rewrite football history forever.

Paisley was already a club legend before hanging up his boots, but it was from the dugout that he really earned his place amongst football’s elite. As Shankly’s number two, the County Durham-born Red was an integral component as Liverpool became a major player in English football. The Shankly years would bring three league titles, a Second Division title, two FA Cups, and a UEFA Cup.

When Shankly retired, Liverpool fans would have been forgiven for having their fears. With Paisley in the top role, though, the Anfield giants became an even more dominant force than ever, enjoying their greatest ever period.

In just nine years as head coach, Paisley steered the club to six First Division crowns, three League Cups, and one UEFA Cup. Undoubtedly his biggest achievement, however, was leading the Reds to European Cup success on three separate occasions – including back-to-back wins 1977 and 1978.

For that CV alone, he’ll always be regarded as one of the nation’s finest.

Having already been a member of the backroom staff prior to Shankly’s arrival, Paisley quickly struck a winning connection with the Scottish manager as the pair set about turning Liverpool into a great club. The bulk of those successes stemmed from hard work on the training field.

Aside from working on technical qualities with the ball, instead of the previous reliance on physical attributes, Paisley’s physiotherapy background went a long way to improving the squad’s conditioning. It would be a secret weapon throughout his time in the dugout, both as an assistant and as a manager.

In stark contrast to his public persona, Paisley ruled Liverpool with an iron fist. His authority, combined with an astute eye in the transfer market, would become the ideal qualities to shepherd in an era of domestic and continental dominance.

As a one-club man, the club’s most successful manager ever additionally boasted an incredible ability to find and sculpt players until the right pieces for his Anfield vision. Above all else, he was a lover of the club and the beautiful game; perhaps fittingly, he departed this world on Valentine’s Day 1996.

Paisley spent less than a decade in the manager’s hot seat, but his overall stint on the Anfield touchline lasted for nearly quarter of a century; there can be absolutely no doubts about his influence on both Liverpool and English football as a whole.

Even without counting his immense impact on the Shankly era, the magnitude of Paisley’s nine-year dominance cannot be emphasised enough. Only Ferguson can better the Liverpool manager’s haul of six league titles, while Carlo Ancelotti is the sole manager to match the managerial record of winning three European Cups.

While Paisley was a one-club man, he certainly didn’t guide just one team to success. In fact, only four members of his first title-winning squad were still present in his departing season triumphs. The statistics don’t lie, and he delivered an average of over two trophies per season for the course of nearly a decade.

When added to his victories as Shankly’s assistant, his prolonged achievement is up there with the beautiful game’s best. 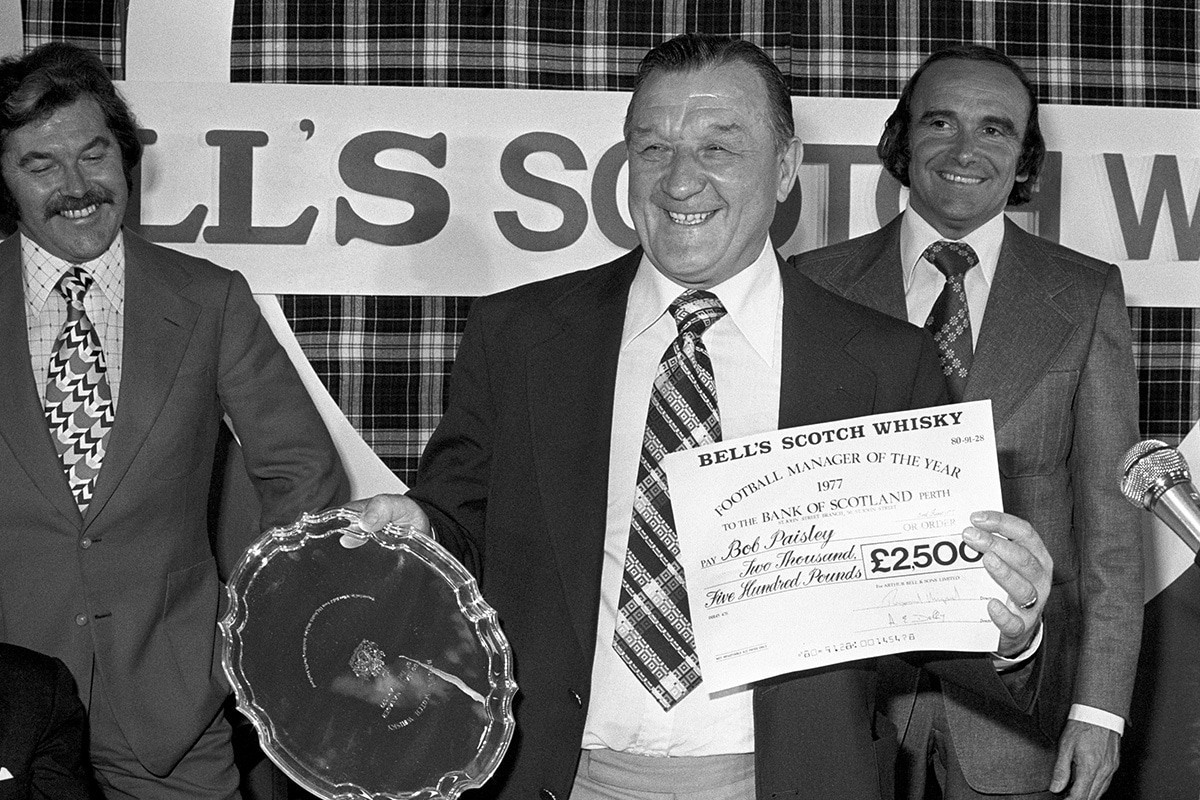 Paisley isn’t only an icon of Liverpool; he isn’t even just an icon for football. The legendary Liverpool boss is one of the few characters to transcend the sport and become a pillar of British history.

Liverpool fan or not, Paisley was the man to establish England’s place at the very summit of the football pyramid as they lifted half of six consecutive (Nottingham Forest twice, and Aston Villa clinched the other) English-won European Cups.

Success alone guarantees his place in the history books forever, but Paisley offered so much more in terms of developing better players, both technically and tactically, through hard work on the training field. Those philosophies started under the wing of Shankly, and were taken to another level during his own tenure.

Paisley’s name remains as relevant as ever for fans, modern coaches and advocates of intelligent, stylish football. The fact he achieved so much while staying loyal to one club only amplifies the allure even further.

Paisley isn’t only a candidate for best English manager of all-time, he’d also gain a mention in discussions for the best club coach in world football too. A legend in every sense of the word.