Arsenal didn't send shockwaves across the Premier League with their summer transfer business. Alexandre Lacazette was the sole marquee signing, arriving to much fanfare from Lyon for a club record £52.7million.

Muscular Bosnian and instant fan favourite Sead Kolašinac was added, too, and while many viewed his signing as much-needed, it briefly placed a question mark over the future of Nacho Monreal.

However, with reports linking him with a move back to La Liga, Monreal declared his intention to stay and fight for his place as Kieran Gibbs was sold to West Bromwich Albion.

Since then, Monreal has established himself as one of Arsène Wenger's most consistent defenders.

The 31-year-old Spaniard has certainly profited from the switch to a back-three. Not only has it cemented his place in the side as the left-sided centre-half, Wenger has found a way to incorporate the hard-running of Kolašinac, too, who is flourishing as the left wing-back.

Suffice to say, Monreal would not be playing there had Arsenal signed another natural centre-back in the summer. When he first played in the back three last season, there were valid arguments over his long-term future in the role but, with injuries to Laurent Koscielny and Calum Chambers, the former Malaga man has had no problem in slotting in beside Shkodran Mustafi and Rob Holding.

Never has that been clearer than on Sunday, when an outstanding Monreal performance helped lift the Gunners to their fourth straight win in all competitions.

Monreal even scored – only his second Premier League goal in 142 appearances – as the north Londoners eased past Chris Hughton's newly-promoted side.

However, it was Monreal's passing which really captured the attention of statisticians and analysts on Sunday.

The defender was the only player over the weekend to complete more than 100 passes, completing 102 out of 105 for a success rate of 97.1%. Only Manchester City's John Stones had a higher success rate with 97.6% but he only attempted 82 to Monreal's 105.

It's easy to write that off by saying that, as a centre-back, Monreal was simply passing across the back-line. However, if you look at his stats across this season, 72% of Monreal's total passes have been forward.

Also, his average pass length is 17m, which is longer than Kolašinac, Mesut Özil, Theo Walcott, Lacazette and Alex Iwobi among others. Against Brighton, Monreal completed all three of his long balls and made two key passes, so the perception that he is a safe, backward-thinking passer of the ball simply doesn't fly.

Monreal also stood out against in the 2-0 win over West Bromwich Albion. Arsenal Fan TV named him the man of the match ahead of two-goal hero Lacazette and it was difficult to argue as he made six interceptions, four tackles, three clearances and one crucial goal-line clearance when the score was still 1-0.

The graphic below, per Squawka, shows Monreal's six interceptions against the Baggies. 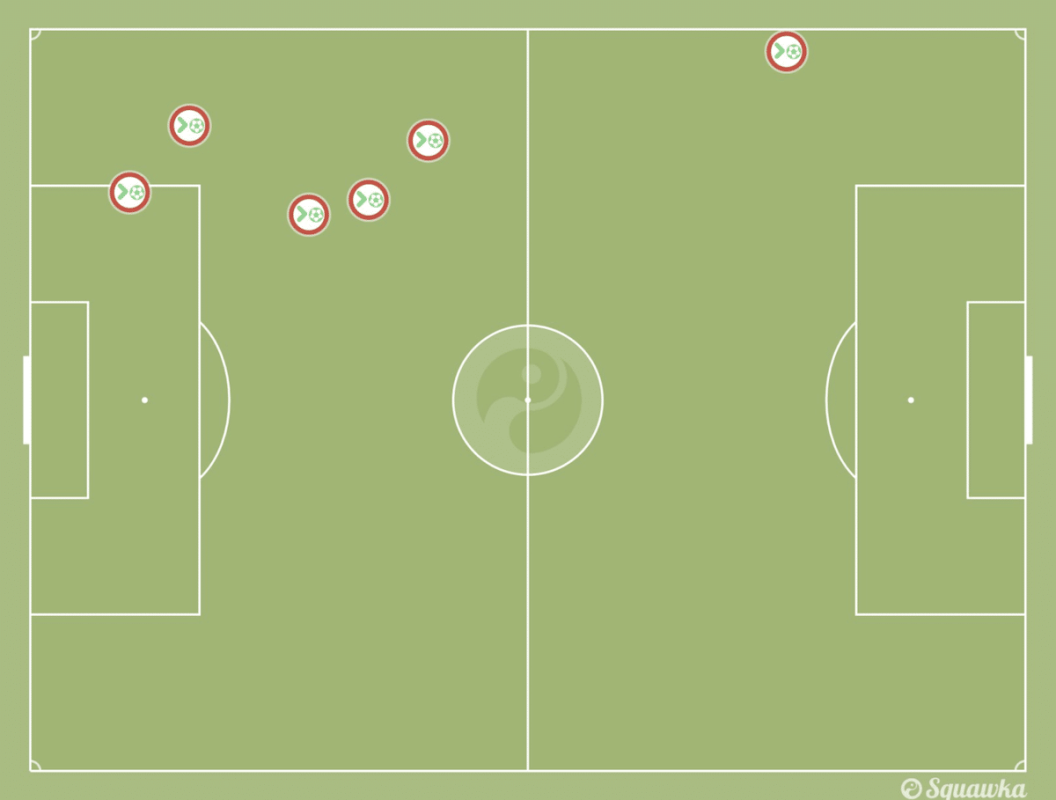 Once again, it was his reading of the game and incisive passing that caught the eye, and it hasn't gone unnoticed.

Monreal's understanding of space and positioning has stood out, with 22 interceptions in total this season more than any other player (except Steven Defour, who also has 22).

Monreal's ability to sense danger and make an intervention at the right time has been a regular feature of his play in recent weeks and has certainly contributed to Arsenal's parsimonious defence of late, with four league clean sheets on the trot.

Greater tests than Brighton and West Brom lie ahead but Monreal's recent rise to prominence suggests that his future as a member of Arsenal's back three looks safe and secure.

His recent showings have drawn comparisons to his compatriot Cesar Azpilicueta at Chelsea. He's keeping good company and Arsenal fans are hoping it's only the beginning of his greatest season at the club.