This clash pits two teams against each other who have just one win in their last five. Can either side bank three points here? Find out with our Blackpool vs Coventry match preview with free tips, predictions and odds mentioned along the way.

Blackpool to grab first three points of the season

Blackpool might be winless from their first two Championship games but don't think they don't know how to win games; they've just hit Middlesbrough 3-0 in the League Cup and had been on a really strong run of form in competitive matches prior to their loss against Cardiff on Saturday. Their home form is reasonable too with three wins from their last five competitive games. You cannot use the word ‘reasonable' to describe Coventry's away form; they've lost their last five on the road including a couple of pre-season games against teams they really ought to be beating.

If you look at the recent results of both Blackpool and Coventry it's clear neither are bang at it. What it also shows is that the goals aren't exactly raining in either. Blackpool have seen three of their last five come up short of the 2.5 cut off with Coventry weighted the other way; three of their previous five have gone over 2.5 albeit all three of the ‘overs' have only seen three goals. It's hardly a slam dunk admittedly but four of the last five head to heads have been under 2.5 with an average of 2.0 goals per game; that last stat gives these odds real value.

At least one of the teams will blank

In our previous tip we touched on the fact that goals have been lacking. Now we make the prediction that the match will end with at least one side goalless. Blackpool's last three home games have all ended that way whilst four of Coventry's previous five road games have seen a blank in them too; it's been the Sky Blues failing to score in each of those games too. The last two head to heads with Blackpool as the home team have ended with only one side scoring as well.

The best odds for Blackpool vs Coventry

Blackpool ended last season on one of the best runs in the football league; that bubble has well and truly burst just one week into their Championship campaign with Cardiff having dished out a 2-0 reality check at Bloomfield Road on Saturday afternoon. It's not just results that are going against Blackpool though; they've got a growing injury list with Kevin Stewart the only one potentially back for this game. As for Coventry, they've got a few long term absentees but that's the least of their worries. They've lost six of their last seven matches; can new loan signing Jake Clarke-Salter help them change that?

FAQ ahead of Blackpool vs Coventry 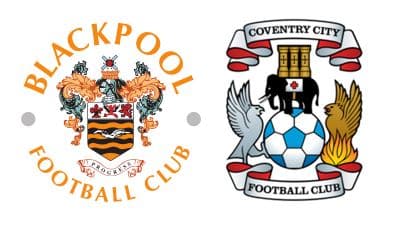