Blackpool have started their Championship season like the ended their League One campaign last year – without losing games. Can they continue their impressive form against Cardiff? Find out with our Blackpool vs Cardiff match preview with free tips, predictions and odds mentioned along the way.

A point each and everyone is happy

We start our predictions in the match result market and see this one ending as a draw. Newly promoted Blackpool registered their first point of the season in game week one courtesy of a draw away at Bristol City whilst Cardiff achieved the same result hosting Barnsley. Last season neither side were shy of drawing games either with Cardiff registering 14 to Blackpool's 11. When you consider where we are in the season, a share of the spoils is something both would settle for now. Mick McCarthy is well known to ‘settle' for a point away from home whilst Blackpool will see it as a clear sign of settling in; the two notoriously have tight matches too – none of their past five meetings at Bloomfield Road have ended with more than a goal in the score line.

Where correct scores are concerned it can sometimes feel like a ‘finger in the wind' approach but not here. We've just mentioned the fact there has been little to choose between Blackpool and Cardiff at Blackpool's ground and two of those matches ended 1-1. The score line is also one both sides have become accustomed to of late. Blackpool have drawn two of their last four 1-1 whilst Cardiff have recorded the score line four times in their past six league matches.

Blackpool to be left wanting Moore?

Last season Kieffer Moore top scored for the Bluebirds with 20 goals. He then went to the European Championships and impressed for Wales. With a new season arriving quickly he's been eased into things by McCarthy but we wouldn't be surprised if he starts Saturday after being subbed off in Cardiff's League Cup tie in midweek. If he plays, he'll be a huge threat. Not only is he somewhat of a monster in the box but Cardiff have the standout record of scoring from set pieces.

Check out the best odds for Blackpool vs Cardiff

A hard fought draw and a fair result

Blackpool ended last season by winning the League One playoffs; they earned their place their courtesy of a run that saw them lose just two games in 25 matches and this season has kicked off with them unbeaten from their opening duo of games. Cardiff didn't make the playoffs last year but, at one point, looked like they might with the arrival of Mick McCarthy sparking them into life. They're now a very tough team to play against – and beat – and Blackpool will very much be given a ‘welcome to the Championship' style of match. They both drew in game week one before advancing in the League Cup so this match is a chance for them to go three unbeaten at the start of the new campaign.

We expect Kieffer Moore to start the match for Cardiff but fellow striker Lee Tomlin remains injured alongside with young forward Isaak Davies, who had been involved in the first team during pre-season. For Blackpool, Gary Madine misses out with Kenneth Douglas and Kevin Stewart both doubtful.

Final questions on Blackpool vs Cardiff 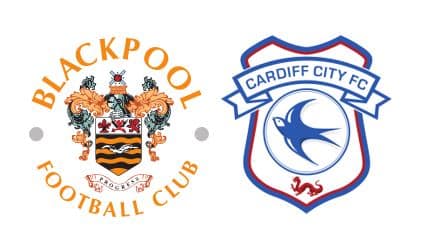