Blackpool look nailed on for a top six finish given their form but it's far from confirmed as yet. Can Accrington pose a problem? Find out with our Blackpool vs Accrington match preview with free tips, predictions and odds mentioned along the way.

Blackpool vs Accrington: Our hot tips

Blackpool to keep on rolling

Blackpool might have thrown away a two goal lead on Saturday but they won't be feeling as low as Accrington. They took a fifth minute lead only to end up losing 5-1 to Wimbledon. What's the longer term context? Well, Blackpool are now unbeaten in 14 games; eight of those being wins. Their visitors, however, have now suffered two heavy losses in just four matches. Their confidence will be on the floor. Given Blackpool are in the race to secure playoff football it's hard to see them letting continuing their good run with a win here.

It won't be a goal shy game

We've just touched on Accrington having fallen to a couple of big defeats in recent weeks; more specifically, they've shipped five goals on Saturday and seven against Peterborough at the end of March. The four points they collected between those two results will be long forgotten when the travel to Bloomfield Road. The Tangerines know where the goal is too; they've scored 13 in their last five shipping six in the process – that's a game average of 3.8 goals. They also boast Jerry Yates up front who has 18 goals to his name this season should be licking his lips.

Blackpool to win with a cushion

If the shambolic defensive displays and long Blackpool unbeaten run mentioned in our earlier tips aren't enough to convince you that the home side might run out comfortable winners on Tuesday then perhaps this will help; since the start of March they've won five games with four of them by a margin wider than one goal. It's worth considering that included in that run is the likes of Peterborough, Oxford and Gillingham – they all sit above Accrington in the table.

Blackpool vs Accrington: All your pre-match stats

Despite having had a more than respectable season on the whole, Accrington are in danger of having a turgid end to the campaign. Their hosts on Tuesday, could be having a promotion party if things go their way. It's hard to envisage anything but a Blackpool win but if Saturday proved anything it's that weird results can happen.

Blackpool vs Accrington: A brief FAQ 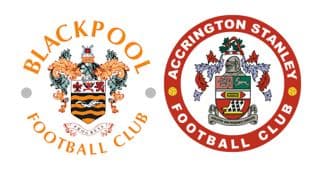