The Blackburn Rovers vs Hartlepool United in the upcoming round of League Cup might not sound so close, but it can still be an exciting game. So, check our preview of this match if you want to know more about it and to get some free betting tips.

If you are struggling to decide what is the right bet for Blackburn Rovers vs Hartlepool United, check our top betting picks for this game:

Blackburn Rovers to Win at Half Time and Full Time

The reason why Blackburn Rovers are such clear favourites in this game is not just because they are in Championship, while Hartlepool United is in League Two, they are also in better form at the moment.

Right now, Blackburn Rovers is the only team with two wins in the first two rounds of the new Championship season, while Hartlepool United has just one point from the first two games in the league. So, we expect the home team to win the game and do so after leading at half time.

These two teams did not met in recent years and we don't have theirh2h data to assist us out in our next prediction. Despite this, we can see this game going over 2.5 total goals.

We mostly expect this because we feel that Blackburn will be able to put multiple goals past Hartlepool. After all, Hartlepool conceded four goals in the first two games in League Two, while Blackburn scored four in Championship. So, we can see this being a high-scoring game.

If you are trying to find the top Blackburn Rovers vs Hartlepool United odds, check our list of odds from the best UK betting sites:

The home team is the clear favourite in this game, but the guests will not give up that easily. So, let's take a better look at the teams now:

After finishing last season in Championship in eighth place and close to the playoffs, Blackburn Rovers and their fans are certainly hoping that their team can make a few steps forward and push for promotion this season. To their credit, the team started the season very well, with a couple of wins in the first two rounds and the are the only team in the league that managed to do this.

On top of this, Blackburn Rovers currently have no injuries or suspensions to worry about.

Not only did Hartlepool United end the last season in the eighteenth place in League Two, which is far from impressive, they also went on a run of nine games without a win at the very end. Meanwhile, the team kept that poor form going in the new season since they started it with one draw and one convincing loss.

When it comes to team news, Hartlepool United will be without Grey, Ndjoli, and Carver in the upcoming game since they are on the team's injury list. 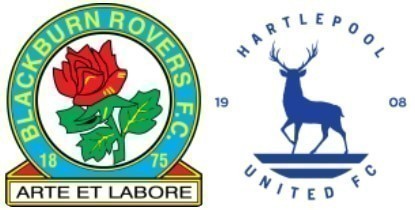