Preston might sit in a lowly 17th in the Championship table but they're the form side out of these two. Can they keep their good run going here? Find out with our Birmingham vs Preston match preview with free tips, predictions and odds mentioned along the way.

Birmingham vs Preston: Our top tips

Preston to take at least a point

It's not every set of tips we start off with a double chance but Preston or draw in this game offers serious value even if it's a shade odds on. Preston are unbeaten in their last seven in all competitions winning four and drawing three. Birmingham meanwhile started the season well but have now fallen to back to back losses and have just one win in their past five. Throw into the mix that Brum have only won this fixture three times in the last 10 attempts and you can see why we're backing Preston to take at least a point.

Right, as we get into our second prediction for Birmingham vs Preston let us tell you that the last three meetings between the pair at St Andrews have all seen one team blank. On top of that, Birmingham's current form shows that both teams have found the net in just one of their past five home games. Preston's away fixtures aren't quite as compelling but two instances of BTTS No in their last five isn't weak enough to change our thoughts.

Our final prediction is for the action to serve up fewer than three goals. This bet will be placed from the over/under goals market with 2.5 serving as the cut off; the league form of both sides has this game finely balanced with both sitting squarely on an average of 2.5. That said, when you switch to looking at the relevant home and away form their averages drop; Birmingham come in at 2.3 with Coventry plummeting to a flat 2.0. Four of the last five h2hs have been short of 2.5 too.

The best odds for Birmingham vs Preston

Birmingham to have their work cut out to take three points

Birmingham had begun the campaign in decent shape but it seems a long time ago now. A heavy defeat to Fulham was bad but not disastrous; the same cannot be said for Peterborough last time out. The Blues will be desperate for Scott Hogan to find that scoring touch again. Preston meanwhile are in a buoyant mood with seven games unbeaten and a big cup win in the week to further elevate spirits after a good point from West Brom at the weekend. The bad news for Preston is that Connor Wickham appears likely to miss out; his first start came in the cup win we mentioned. It lasted just seven minutes.

Final questions on Birmingham vs Preston 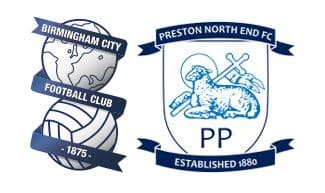