Birmingham vs Plymouth: Our betting tips

Plymouth might be the lower ranked side in this tie but they're doing alright in League One and could give the home fans a few nervous moments. Can they go further than that and win the game? Find out with our Birmingham vs Plymouth match preview with free tips, predictions and odds mentioned along the way.

An upset is on the cards

Plymouth were absolutely flying six weeks or so ago and whilst they endured a tough period in late November, that's largely put that behind them by winning three of their last five games losing just once. Birmingham meanwhile haven't won in four having lost their last two games. Plymouth will arrive into this match thinking they can cause Brum trouble; if they do that early on the home crowd will get anxious. With all that considered, we fancy Plymouth to get the win.

We've already spoken about the fact that Plymouth are performing well in League One and, as such, they won't  come into this game fearful of Birmingham. They will rightly believe they can hurt their hosts and will approach it like any other game. Plymouth haven't failed to score in any of their past six games. Birmingham meanwhile have scored in four of their past five matches – and in their last six at home. We can see both netting in this game.

Check out the key stats & form for Birmingham vs Plymouth

Birmingham are not in a great run of from right now having lost three of their last four and a cup tie with a in form League One side  probably isn't what the doctor ordered; their fans will expect them to win so there will be little respite if they progress. If, however, they lose the game, it will be a hostile atmosphere!

Birmingham have no reason not to go into this match with their strongest possible lineup. They're not going anywhere in the Championship and a mini cup run would give their fans something to cheer about.

Plymouth were flying back in November but a run of three straight wins has seen them slip down the table a bit. They're still in the playoff picture but it's far from a done deal – especially with so long left to run of the season. That said, they'll go into this game at full strength; a result might give them the belief that they deserve to be a Championship side next term.

A brief FAQ ahead of Birmingham vs Plymouth 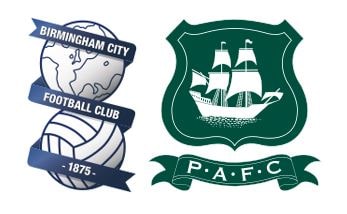