Chris Hughton leaving his post as Nottingham Forest has suited them; they're unbeaten since his departure. Can they keep it up here? Find out with our Birmingham vs Nottingham Forest match preview with free tips, predictions and odds mentioned along the way.

Birmingham vs Nottingham Forest: Our Picks

Things had looked rather bleak for Nottingham Forest until the axe was brought down on Chris Hughton's head. Since then they've taken an impressive seven points from nine including two away victories. It's that final fact that leads us to back Forest to win here. Birmingham have won just three league games this season and are winless in four; three of those matches have ended in defeat meaning Birmingham are fourth bottom of a five game form table. With Nottingham Forest riding the crest of a wave they will fancy their chances of taking all three points.

Someone could easily fail to score

Our next tip for this game is that at least one time will fail to score. Nottingham Forest have blanked in one of their last five and kept a clean sheet in another giving them a record of three games where both teams have scored. Birmingham, however, have kept two clean sheets and also failed to score in three games across their past five. Only one of their previous fixtures has seen both teams hit the net. With three of the last five head to head games also seeing a ‘nil' in the score line the value of these odds look good.

Birmingham fans to have dull day

The final prediction we make builds on Birmingham's inability to score; we've touched on that above in the shape of three games in five without scoring for Brum. It's worse than that though because all three of those games have been their latest three. That's right, Birmingham haven't scored in 273 minutes or action. With this bet we also have the comfort of the fact they can score – they just can't score two. In 12 games across all competitions they've only managed to bag two goals twice.

Find the best odds for Birmingham vs Nottingham Forest

Birmingham vs Nottingham Forest: The Teams

Birmingham have a near clean bill of health heading into this match with Ivan Sanchez the only name on the treatment table. After four games without winning where three have ended in rather lacklustre defeats Lee Bowyer could really do with a result; Troy Deeney and Scott Hogan will have a big say. Nottingham Forest's fortunes have changed over the past few weeks. Under caretaker charge they won a match and Steve Cooper has now overseen four points from six. Lewis Grabban impressed off the bench in midweek and will hope to start here. 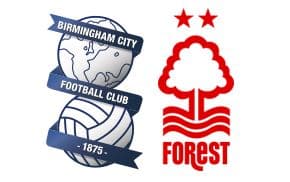