Neither of these sides are in great form but, then again, both will probably be happy with where they sit in the standings. Who though will come out on top when Derby travel to St Andrew's? Find out with our Birmingham vs Derby Prediction match preview with free tips, predictions and odds mentioned along the way.

Before we even offered up our three predictions we touched on the fact these two sides have started in season somewhat strangely. Their last five games read the same with two defeats, two draws and a solitary win. Neither though will have their confidence on the floor with the sides sitting eighth and fifteenth in the table respectively. Derby, who sit two points lower than Birmingham, in particular have surprised a few with their resilience this season. It's that fact that we think will see them to a point as they take on a Birmingham side that have managed just one point from nine at home. Derby haven't lost at St Andrew's since 2013 either.

Next up in our tips is that the total goals in the Birmingham vs Derby match is under 2.5. It's a bet that goes against the head to head record but more recent form backs it up rather convincingly. Birmingham have seen four of their last five games come up short of the 2.5 goals mark including their last two. When you consider they've had a freak 5-0 win in that period, a game average of just 2.2 is bonkers low. For Derby, they've fallen under 2.5 in three of their past five games. Again, their match average makes good reading; they've seen a total of nine goals – an average of just 1.8.

Sorry, we meant a really low scoring one

Okay, so our final prediction isn't exactly ground breaking with it coming from the same market as our previous tip but there is method to our madness. Firstly, the odds on an under 1.5 bet are much more appealing but that's not the only thought we had on the subject. We toyed with a 0-0 score prediction given both sides have struggled on the goal front along with recording a couple of clean sheets. By betting this way though, we've just covered ourselves in the event of a howler or screamer swinging the match one way rather than straight down the line.

Find the best odds for Birmingham vs Derby Prediction

A dull draw lays in wait

Derby are in a bit of a crisis off the pitch but, in spite of the stick he's received, Wayne Rooney is showing all the signs of a manager pulling things together. Sure, Derby aren't pulling up trees with six points to their name but they'll be satisfied with the displays they've put in. At 39-years-old Phil Jagielka's experience could be huge on the defensive unit too. As for the hosts, Birmingham, they sit just outside the playoff positions. It's early to look at the table, of course, but the way they've started won't have them too far away if they can maintain it. Their recent addition of Troy Deeney could prove a really smart piece of business; he'll be a big threat in this game too.

FAQ on Birmingham vs Derby Prediction 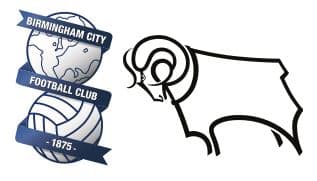