This game sees two unbeaten sides lock horns. Will either team suffer their first loss of the campaign? Find out with our Birmingham vs Bournemouth match preview with free tips, predictions and odds mentioned along the way.

We could analyse the starts to the season both teams have had for a long time if we do wished; with both side yet to taste defeat it would be harsh to justify a match result tip on that – especially with the fact both have two wins and a draw from their three games. There would be few who argue that Bournemouth have better quality in their squad though and more goals too. They're what win games and are a big part of the reason we back them to beat Birmingham. The other element is the head to head history; the last five meetings where Bournemouth were the away side have ended in defeat for the hosts.

A good watch for the neutral

We've touched on the goal scoring prowess of Bournemouth in the first of our tips. We expect them to net a few goals here too with the total goals of the match ending up north of 2.5 goals. We'll start justifying this with the h2h; the five previous St Andrew's clashes all of them have gone beyond 2.5 goals with an overall goal haul of a rather hefty 24. That's 4.8 per game. More recently, Bournemouth have passed the 2.5 mark in their last five with a game average of 3.6. For these reasons, Birmingham's game average of 2.0 can largely be ignored with the odds still carrying plenty of value.

The final tip for the Birmingham vs Bournemouth match is that Phil Billing will score at anytime. The former Huddersfield midfielder bagged eight goals throughout last season; he's already netted three this year with one strike in each of The Cherries' first three games. It's little surprise that he's attracting attention from Premier League sides but there's no way Scott Parker is taking him out of the shop window when he's in this sort of form.

The best odds for Birmingham vs Bournemouth

Birmingham are unbeaten so far this season but there is little expectation on them to compete at the very summit of the Championship; achieving a playoff finish would be a fantastic season for them. For Bournemouth, anything but promotion will be seen as a huge failure. They've started the season well but consistency is the name of the game and that means not losing matches like this. In terms of key battles, our goal scorer tip Billing vs Ivan Sunjic could have a big say on who wins.

FAQ for Birmingham vs Bournemouth 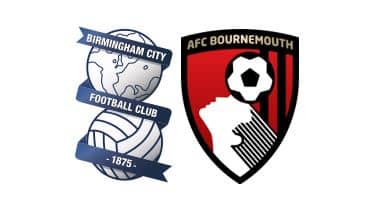