We often hear managers calling for a winter break in January due to the heavily congested post-Christmas fixture programme, but during the 1962/63 season football enjoyed something of an enforced three-month sabbatical due to freak weather conditions, which threatened not only the national game, but the country as a whole.

When Middlesbrough finally overcame Blackburn Rovers in a replay at Ayresome Park on the 11th March 1963, it ended one of the most chaotic third round weekends in the history of the FA Cup. The round of games, which had begun back on January 5th would take an astonishing 66 days before being completed as the season looked like it might never end.

The winter of 1963 was one of the coldest in living memory. Snow swept across the nation on Boxing Day 1962, and in many places it remained on the ground until late March. The situation wasn't helped by arctic winds which led to huge snow drifts up to 20 feet feet deep in some places.

Officially it was the coldest month of the 20th century that January, with temperatures of -19 degrees Celsius being recorded in several locations with the average temperature failing to get above freezing; it was that cold that rivers had lumps of ice in them and even the sea froze solid.

Not surprisingly the country was brought to a standstill, while the weather also played havoc with the sporting calendar. Horse racing was was temporarily cancelled with no meetings taking place in England for four months, but football was one of the sports hit most severely and particularly the FA Cup. 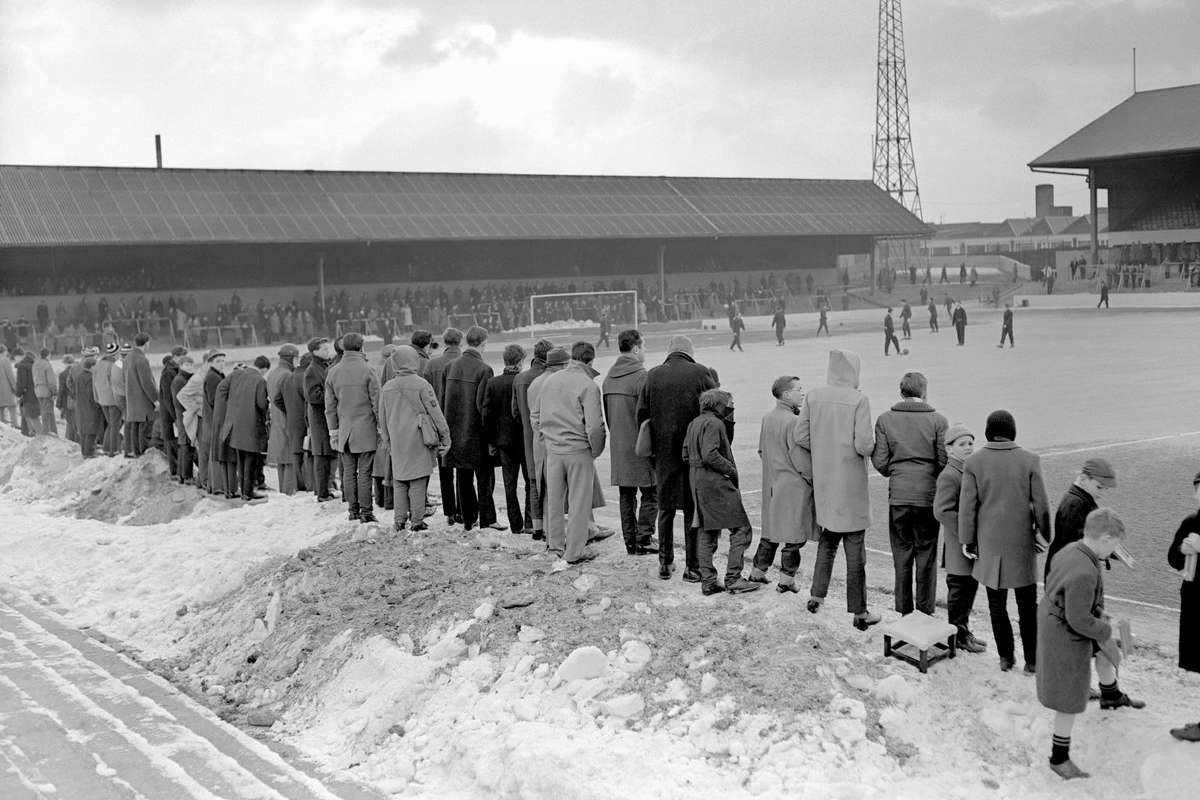 Lincoln City's game with Coventry City was postponed an astonishing 14 times, while in Scotland a cup tie between Stranraer and Airdrie was called-off no fewer than 33 times. Things weren't much better in Yorkshire either as Barnsley were only able to play two matches between 22nd December and March 12th.

In all there were a total of 261 postponements and half of the 32 ties fell victim to the weather 10 times or more. In the years since nothing has had such a dramatic impact on sport in the British Isles and many will hope it never will again.

So extreme were the conditions that friendly games were hastily arranged in Ireland, where the conditions weren’t quite as bad as teams were desperate to maintain fitness levels. Never one to miss an opportunity, Coventry’s Jimmy Hill excelled in the trying circumstances.

Hill took his Coventry side to Ireland on a number of occasions where they played Manchester United and Wolves, once in Cork and then in Belfast. Hill and Stan Cullis, the Wolves manager, were so pleased with the arrangement that they couldn't wait to go back.

Such was the interest that the game against Manchester United at Glenmalure Park attracted a crowd of over 20,000 who had turned up to see Bobby Charlton score a late goal to earn United a 2-2 draw.

But for some, the freeze provided a welcome distraction. When the snow arrived in December, Fulham were in real danger of relegation from the old First Division, when the thaw arrived some two months later, they began an incredible run of 13 weeks without defeat, a streak which hauled them up the table and secured safety.

In true British spirit, football clubs attempted to soldier on regardless in order to ensure at least some action could take place, often to no avail. While Tommy Docherty’s Chelsea set off to Malta for a little warm-weather training a tar burner was employed to try and clear the snow from the Stamford Bridge pitch. Flame throwers were even brought in at Blackpool and at Halifax they made the best of things by turning their pitch into a skating rink and charged supporters to use it. 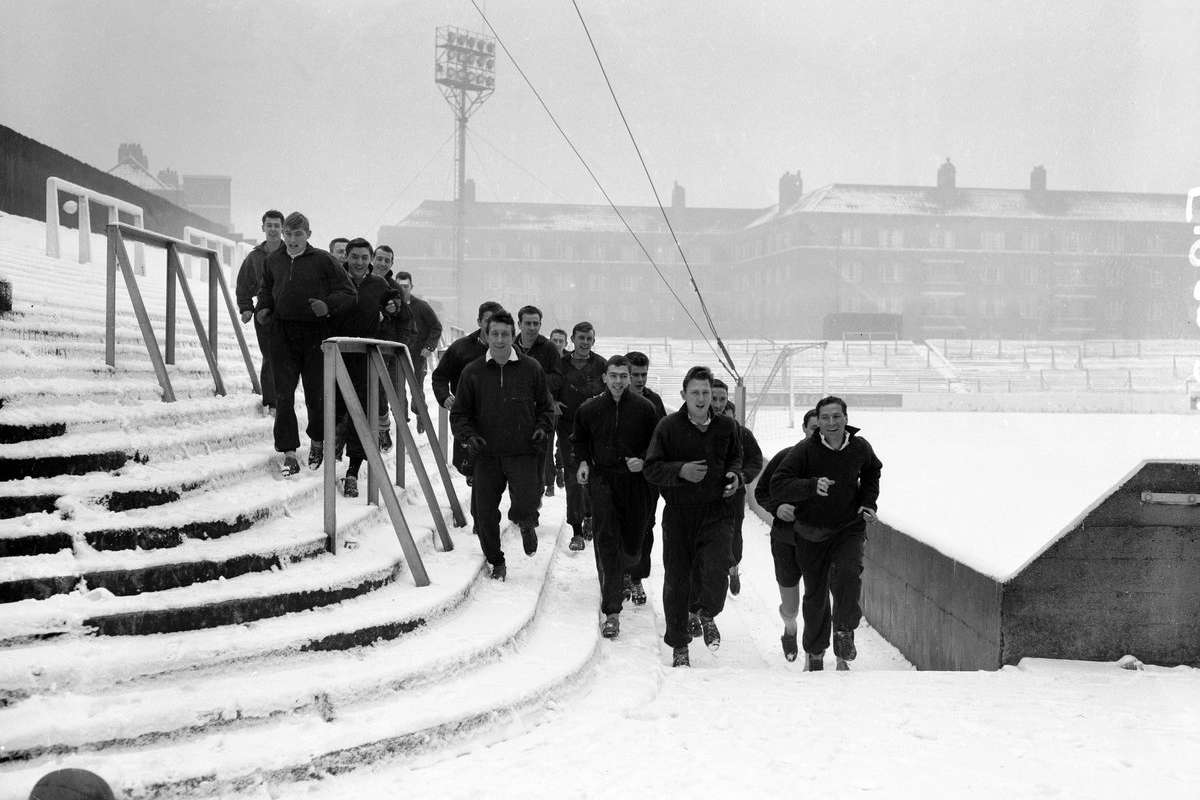 But Brighton's efforts backfired somewhat and in an effort to get their relegation threatened season back underway a local builder offered to thaw the icy Goldstone Ground pitch with his tarmac-laying equipment. Unfortunately his actions destroyed the pitch and Brighton eventually went down.

Every cloud has a silver lining, though, and that harsh winter would eventually see the birth of something that was to become a part of the British way of life for years to come. With no games for people to gamble on the football pools companies were desperate to find a way of attracting revenue. Their solution was as simple as it was effective thanks to the introduction of the Pools Panel which, after three void Saturdays, met for the first time on January 26 and sat for four consecutive weekends.

Perhaps one of the more poignant incidents to occur that harsh winter was when Sunderland took on Bob Stokoe's Bury in a Second Division promotion clash at Roker Park. A crowd of more than 42,000 braved the elements that day, which convinced the referee to give it the go-ahead despite the treacherous conditions as sleet and snow made the pitch nothing short of a quagmire.

Never one to shirk a challenge, when put clean through on goal young England hopeful and Sunderland striker Brian Clough suffered severe damage to his right knee after colliding with the onrushing Bury keeper Chris Harker.

Surgeons battled to save his career, but medical science was pretty limited in those days and, as the weather went from bad to worse, Clough’s career was in danger of going downhill like Eddie “the Eagle” Edwards. Against all medical advice he attempted a hopelessly-ill fated comeback, but only managed to play three more games before packing it in for good.

With the very real threat that the season would last until mid-summer, the authorities had to act fast in order to clear the backlog of postponed FA Cup fixtures. It was decided that clubs could play ties on neutral grounds if they were playable. Non-League Gravesend refused to shift their home tie with lofty Sunderland however, and the Kent team eventually held the Rockerites to a draw, before losing the replay in Sunderland. 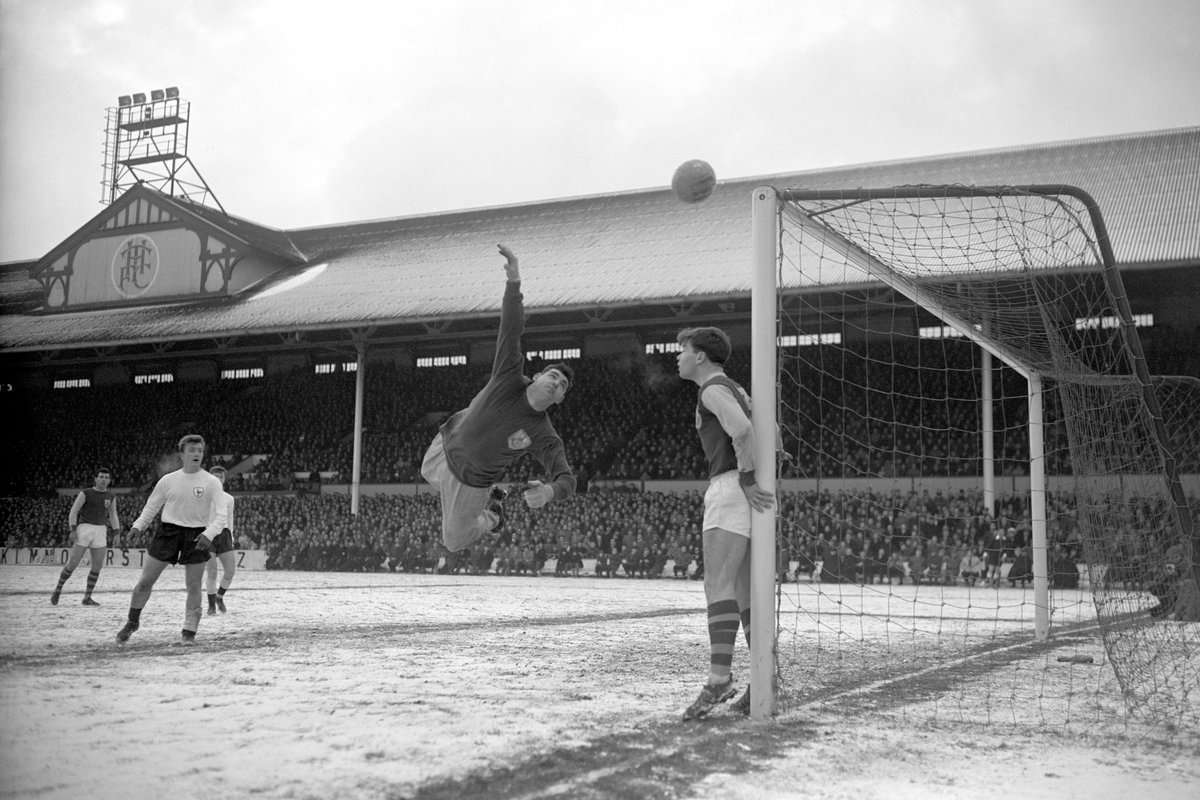 A thaw of biblical standards finally arrived by March but it still required heavy machinery to penetrate two feet of ice that covered Lincoln’s Sincil Bank pitch before the FA Cup tie against Coventry went ahead at the 16th time of asking. Coventry’s exploits in Ireland might have kept fitness levels high but nothing could have prepared them for the fixture congestion that was to follow.

The Sky blues played five FA Cup ties, including two replays against Portsmouth and two league games in just over a fortnight, with the last on the Monday immediately prior to a quarter-final clash with Manchester United, in a series of games which would never be allowed to happen today.

When the season finally got back on track that March, the title would be fought-out between Leicester, Tottenham and Everton. After Everton were beaten 2-1 at Sheffield United on March 30th, it looked like Spurs were in the driving seat, even though Everton still had two games to play. Leicester stood between the two rivals, but reaching the FA Cup final, in all honesty, eventually took its toll.

An fantastic encounter between Everton and Spurs on April 20th opened the way for the title to return to Goodison after a 24 year absence and a bumper crowd saw Everton win by the only goal from Alex Young, which ultimately secured the title for the Blues after almost a quarter of a century, not to mention several months without any action.

The FA Cup was still severely delayed, however, with the final between Manchester United and a weary Leicester City taking place at Wembley on May 25th, some three weeks later than the final took place the previous season.

Whether it was United’s willingness to play in Ireland during the big freeze or Leicester’s gruelling effort to win the league Matt Busby’s men, who had battled relegation themselves for much of the season, eventually lifted the famous old trophy after one of the most convoluted and chaotic seasons in living memory.