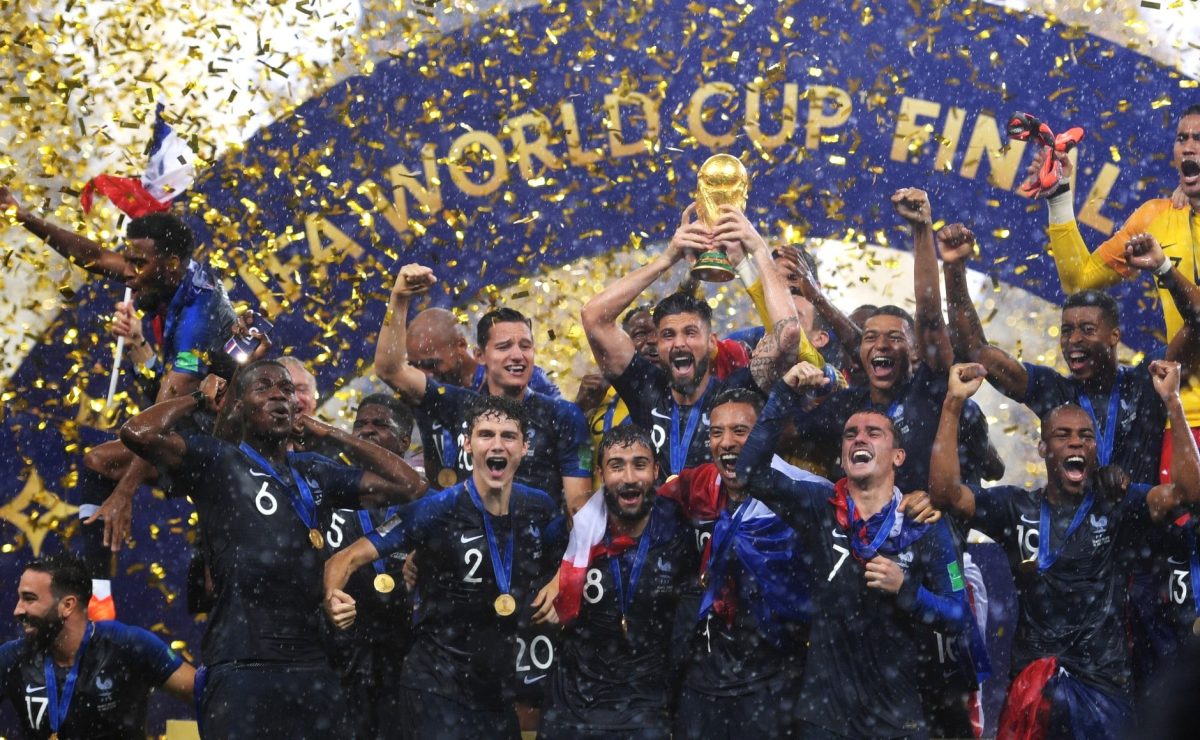 A biennial World Cup? Don’t rule it out. Not so long ago, that was a mere thought, but it could become a reality in the very near future.

The man aiming to bring this plan to the fore? None other than former Arsenal boss Arsene Wenger. The Frenchman gained legendary status for his 22-year reign in north London, at least among the Gunners faithful. For that, the clever boss undoubtedly had his admirers across the world of football.

He was, however, certainly disliked by a long list of opposition players and managers. But that number has undoubtedly grown since the 72-year-old released his latest idea to the world. Many individuals and groups have voiced their concerns around such a plan. But there are plenty in support of the so-called innovative idea.

Now FIFA’s chief of global football development, Wenger is fully confident that we will be watching the greatest tournament in the world every two years.

Is a biennial World Cup a new idea?

The official mandate arrived in May 2021, when FIFA’s congress voted to carry out a feasibility study on a biennial World Cup. That came off the back of an initial proposal from the Saudi Arabian Football Federation. FIFA President Gianni Infantino welcomed that proposal with open arms, and his thoughts were shared by 166 national federations who voted in favour. A total of 22 voted against. It’s a story for another day, perhaps, but don’t be surprised to see a World Cup taking place in Saudi Arabia in the near future…

Reportedly, however, the one and only Sepp Blatter first thought up the idea. The former FIFA President brought it to the table in 1999, with the wily old Swiss believing it was time to switch things up in his own specific way.

Blatter has, of course, since received all sorts of bans and fines for his incredibly illegal activities. So bringing back a plan of his from the grave surely cannot be considered a logical step?

But Infantino, in his infinite wisdom, has decided to do just that. He has put Wenger in charge of the entire operation, with the former manager suggesting that a new football calendar could be decided in the very near future.

What does the proposal involve?

Wenger’s plans involve a biennial World Cup in even years, with confederation tournaments – including the European Championship – to take place in odd years.

There would be either one or two mid-season international breaks – in October, or October and March respectively – for a month in total. These would occur when qualifying for major tournaments takes place, as opposed to the current five periods.

To avoid burnout, the number of qualifying and friendly matches would be reduced, while there would be guaranteed rest periods for 25 days once tournaments have finished.

“I think if we go on like that we hit the wall,” Wenger told BBC Sport in September. “What is absolutely detrimental to the players is repeated travelling and jet lag. With reducing the qualifying period, I believe that the clubs will benefit, the players would benefit.”

Importantly, no changes can happen until the current match calendars expire. The men’s current calendar runs until 2024, with the women’s calendar expiring in 2023.

The plan has already gathered plenty of momentum in its early stages. Whether it’s through Wenger or through FIFA sending a hefty pay package, some big footballing names are backing the proposals. Former players Marco Materazzi, David Trezeguet, Youri Djorkaeff, Peter Schmeichel and a handful of others have all appeared at events promoting FIFA’s latest innovations, with World Cup hero Ronaldo stating: “A World Cup is always great. We want more of it. The fans want more of a show.”

But not all ex-pros see it that way. As per Sports Illustrated, Arsenal and France legend, Thierry Henry, has questioned the approach of asking former players what they think, instead of consulting current players who will actually be playing in the competitions. He also added that a World Cup every four years is more than enough, such is the mental effort required to even prepare for such a tournament, never mind playing in one.

His thoughts have been echoed by the likes of Liverpool manager Jurgen Klopp and England women’s head coach Sarina Wiegman.

UEFA in the driving seat

But perhaps more convincing are the words of several confederations throughout the globe, none more so than UEFA. Its President Aleksander Ceferin has already warned of a potential European boycott of the tournament if it is held every two years.

CONMEBOL, the South American equivalent of UEFA, is also strongly against the plans, but the likes of CONCACAF (North and Central America and the Caribbean) and CAF (Africa) have confirmed their intention to look at the proposals with an open mind, suggesting they would welcome the change.

Unfortunately for Wenger, two groups that have significant pull in the game are also against the idea; European Leagues, an umbrella group that includes the Premier League and all of the other major domestic competitions across the continent, and the European Club Association, a group including all of Europe’s major clubs (apart from the remaining three European Super League hopefuls).

What do fans think of a potential biennial World Cup?

Sadly it seems that the supporter dynamic has well and truly shifted. When once fans were everything, now their importance has been reduced to ash. It wasn’t so long ago when football fans meant everything to clubs, and those clubs could not survive without the presence of their boisterous support, filling their stadiums, buying their merchandise, or watching their games on TV. Of course, in some stadiums and on some platforms that is still the case.

But there is undoubtedly an ever-growing change in the air, and that is down to the greedy individuals who want to change the game for good. Fortunately, we have seen in the recent European Super League ordeal that fans do indeed still have the power to affect change.

It is hard to know, however, if fans will be powerful enough to prevent further changes to the game, especially when they are being implemented by the sport’s governing body. One would think that fan pressure shouldn’t even be required this time around, with common sense the much more straightforward solution. FIFA condemned the breakaway European Super League, yet at the same time have scheduled a World Cup in Qatar, a nation with very little footballing history and extremely contentious human rights issues.

A biennial World Cup may not exactly be as blatantly obvious as the European Super League plans in terms of financial gain, but it could just be another nail in the coffin for the beautiful game as we know it, which doesn’t have much life left in it anyway.

The clearest indicator of fan opinion so far can be gauged from a survey commissioned by FIFA in September. Conducted by YouGov, the survey involved 23,000 people from 23 countries across FIFA’s six confederations.

Somewhat surprisingly, the survey revealed that a majority of fans would support a men’s World Cup more frequently than every four years. A total of 15,000 respondents were identified as expressing an interest in football and the World Cup, with 55% in favour of the competition being staged every one, two or three years. Of these three options, a biennial tournament was the most popular.

But on a positive note for those who oppose the plans, there is strong opposition from the Football Supporters Europe group. As reported by Reuters, the group’s letter to UEFA President Ceferin was acknowledged and replied to with similar sentiment.

The game’s governing body has since confirmed that an expanded survey involving over 100,000 people from more than 100 countries is underway.

Too much of a good thing? Is there a thing as too much football? By the looks of the current calendar, clearly not. Even during a global pandemic, competitions such as the UEFA Nations League and even international friendlies went ahead. Important for things like world rankings and qualifying for later tournaments, perhaps, but more important than keeping the world safe in exceptionally challenging times?

Was there a need for the USA to travel to Belfast to play Northern Ireland in a friendly, for example, or could matches like this have been avoided, or at least postponed, and a more reasonable plan put in place?

Interestingly, Wenger’s proposal cuts down on international travel throughout the season. But his viewpoint that more World Cups would give national teams more opportunities to qualify may not have legs to stand on, with the same nations just likely to qualify every time.

But of course with more matches comes more revenue flooding into the deep pockets of FIFA and its member associations, with many believing the ultimate aim of the whole plan is for Infantino to continue at the helm thanks to this generous revenue increase for his potential voters.

Will a biennial World Cup happen?

More important is the fact that a World Cup will be staged in Qatar. It doesn’t get talked about enough, but yes, the greatest tournament on earth will be staged in Qatar. This year. Moreover, it will take place in Winter, meaning the likes of the Premier League will be forced into taking a month-long break between November and December. It’s unheard of.

The point here is that quite simply nothing FIFA does should surprise anyone anymore, so it would be foolish to rule out a biennial World Cup or indeed any other out-of-the-ordinary changes.

One important note, however, is that there must be unanimous support for the proposal. Any change would require a vote from FIFA’s congress, which comprises all 211 national football federations.

“I’m not on an ego trip,” Wenger told BBC Sport. “I've been asked to help to shape the calendar of tomorrow, I consult the whole world.”

Strong words from the man pulling the strings, but will he get his way with a biennial World Cup?