When Marcelo Bielsa was confirmed as Leeds United's new manager ahead of the 2018/19 Championship season, there was both excitement and consternation.

The Argentine, an immensely influential tactician who counts Pep Guardiola, Diego Simeone and Mauricio Pochettino as former students, is a big deal in coaching, but his deep understanding of football hasn't always translated to success.

He won league titles in his native land in the 1990s but, over the last 20 years, Bielsa has been acclaimed not for the trophies he's collected but the way in which he has shaped teams in his image.

There have been triumphs in this regard. He oversaw one of the most successful periods in Chile's history, his attacking philosophy and faith in youth helping La Roja reach the last 16 of the 2010 World Cup, his daring, Louis van Gaal-influenced 3-3-1-3 formation which focused on possession high up the pitch earning praise from tactical enthusiasts.

After leaving them, he took Athletic Bilbao by storm, astounding the squad with his obsessive attention to detail; before arriving at San Mamés, he compiled a dossier of spreadsheets he built while consuming all 38 of the Basque club's league games from the previous season.

But, despite his incontestable influence on the modern game and its most high-profile tacticians, his career is littered with asterisks.

Despite boasting one of the most talented squads ever assembled, he failed to progress past the group stage with Argentina at the 2002 World Cup (and while he led them to Olympic glory two years later, failure in Japan has always haunted him).

The five years leading up to his appointment at Elland Road were turbulent, too, and perhaps offer the clearest indication as to why he's nicknamed ‘El Loco'. After a dramatic downturn in form led to him departing Athletic in 2013, he took a year out of the game before joining Marseille.

There, his impact was ephemeral, winning eight out of his first ten matches and guiding the club to the Ligue 1 summit before Christmas before fading dramatically to eventually miss out on Champions League qualification. Then, true to form, he shook French football by resigning immediately after defeat in the opening game of the 2015/16 season.

A year later, his eccentricities scaled new heights when a change of heart prompted him to bring the curtain down on his blink-and-you'll-miss-it tenure at Lazio after just 48 hours.

Lille fans certainly aren't avid Bielsistas, either, after his tumultuous return to France ended in acrimony, sacked four months into a doomed reign with the club languishing in the relegation zone.

With Bielsa coming off a succession of failed projects – and some going as far as to question his place in modern football – a creeping disquietude among Leeds fans ahead of his arrival was well-placed.

Having been through ten managers in six years, was such a combustible personality really the right way to go as the next step in the club's long-running quest for promotion back to the Premier League?

Surely, some felt, Leeds needed stability, reliability, longevity, none of which Bielsa, based on his recent track record at least, could offer. Seasoned sceptics yearned for a dependable figure, to which the mad-scientist Bielsa seemed in stark contrast.

However, and while there have certainly been a few hiccups, Bielsa and Leeds have proved a great fit, with one of English football's sleeping giants embracing the Argentine's radicalism, his perfectionism and, most of all, his football.

After a 13th-place finish last season, Leeds are – finally – pushing for promotion, dreaming of a return to the big time under Bielsa's tutelage.

Bielsa fever has swept through West Yorkshire. His impact on the playing personnel, for example, was as swift as it was significant.

Having calculated that a Leeds fan would, on average, have to work for three hours before accumulating the money to buy a match ticket, the 63-year-old ordered his squad to pick up litter around Thorp Arch training ground for the same amount of time, drilling into them an acute appreciation of the toil that goes into supporting a football club. 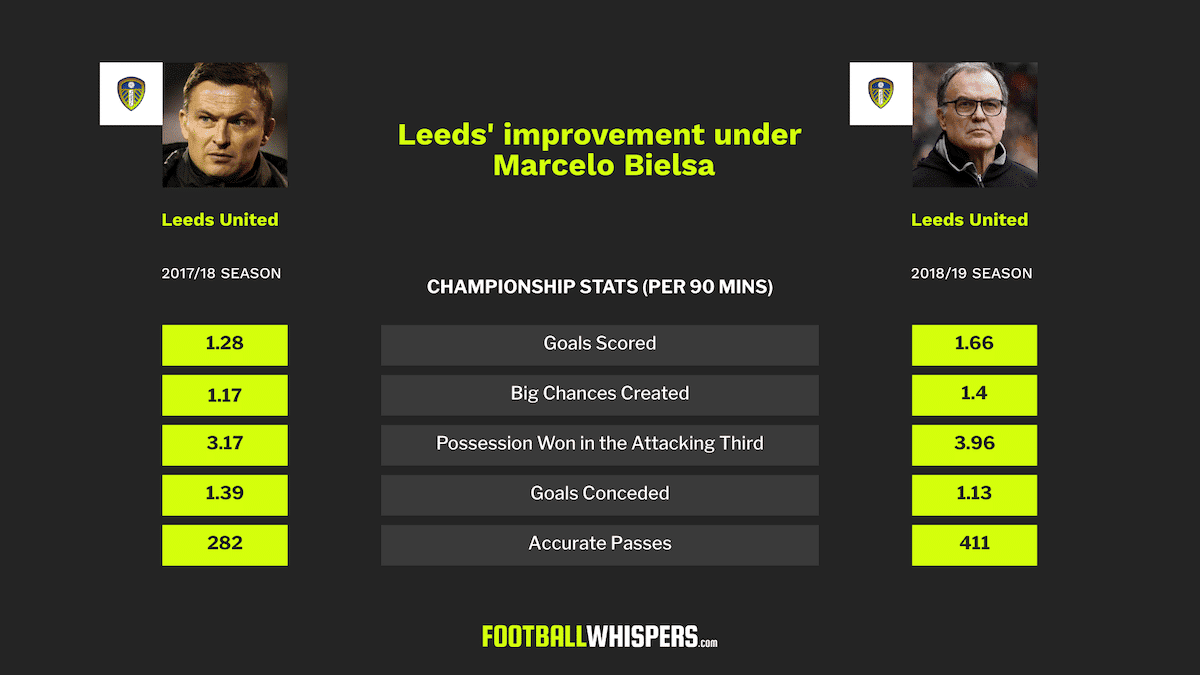 It set the tone for what has been an engrossing ride of a season. It started with a trio of impressive victories which propelled them to the top, a vantage point from which they have only partially deviated.

Kemar Roofe has been a reliable supplier of goals, Mateusz Kilch has impressed in midfield while Pablo Hernández is defying his advancing years – the Spaniard will be 34 in April – by having one of his finest seasons in England.

At the time of writing, they are behind Norwich City on goal difference, with the Canaries assuming first after beating the Whites 3-1 at Elland Road last weekend.

Bielsa now faces a hugely important three months. After a glorious honeymoon period, Leeds have now lost five of their last seven games in all competitions. They remain on course for automatic promotion, but Sheffield United, West Bromwich Albion and Middlesbrough are in Bielsa's rearview mirror and are far from out of the equation.

Given the troubling association of late-season burnout with his squads in the past, the coming may be a real grind for Leeds. It represents one of the most significant challenges in Bielsa's three-decade career in management, too, especially after the palaver over ‘spygate'.

Promotion would be his first trophy since 2004, coincidentally the same year Leeds dropped out of the Premier League, but this season teases something far greater for the club; a restoration of its pride, a return to the top flight after a 15-year hiatus, much of which has been spent in the wilderness, with managers appointed and dismissed at an alarming rate and the club driven to the brink after catastrophic mismanagement.

Leeds have been through a lot. So, too, has Bielsa. They seem to have found each other at the right time and, if the Argentine can guide them back to the Premier League, it would be the crowning achievement of a wild and endlessly engrossing career.