‘The question with Cooper is, is he a better captain than he is a defender? And if so, how can a squad that is pushing for top six support him? Would he be happy with a place on the bench next season aged 27, a peak age for a defender? It’s going to be interesting to find out.’

And with that, The Square Ball’s 2017/18 season review of Liam Cooper, Leeds United captain and centre back, concluded, highlighting the worrisome gap that had opened out between the defender’s capability in representing the team and his capacity to play football.

The questions were not set to end there, though. Within a few weeks, the club had announced the arrival of Marcelo Bielsa as manager. Once again, Cooper was put through the wringer by the fan base.

Could the Hull-born centre-back fit into a Bielsa system? How would the Argentine approach the tricky problem of shifting out a captain who was not up to the task? Perhaps a transfer was on the cards?

Fast forward eight months and the turnaround has been remarkable. Defensively, Cooper stands head and shoulders above his counterpoints in the Championship. With a defensive duels won percentage of over 40 per cent, the Leeds United captain finds himself in illustrious company.

Only five players in Europe’s top five leagues have achieved this feat, and Cooper is also ranked seventh in the league per aerial duels won percentage. 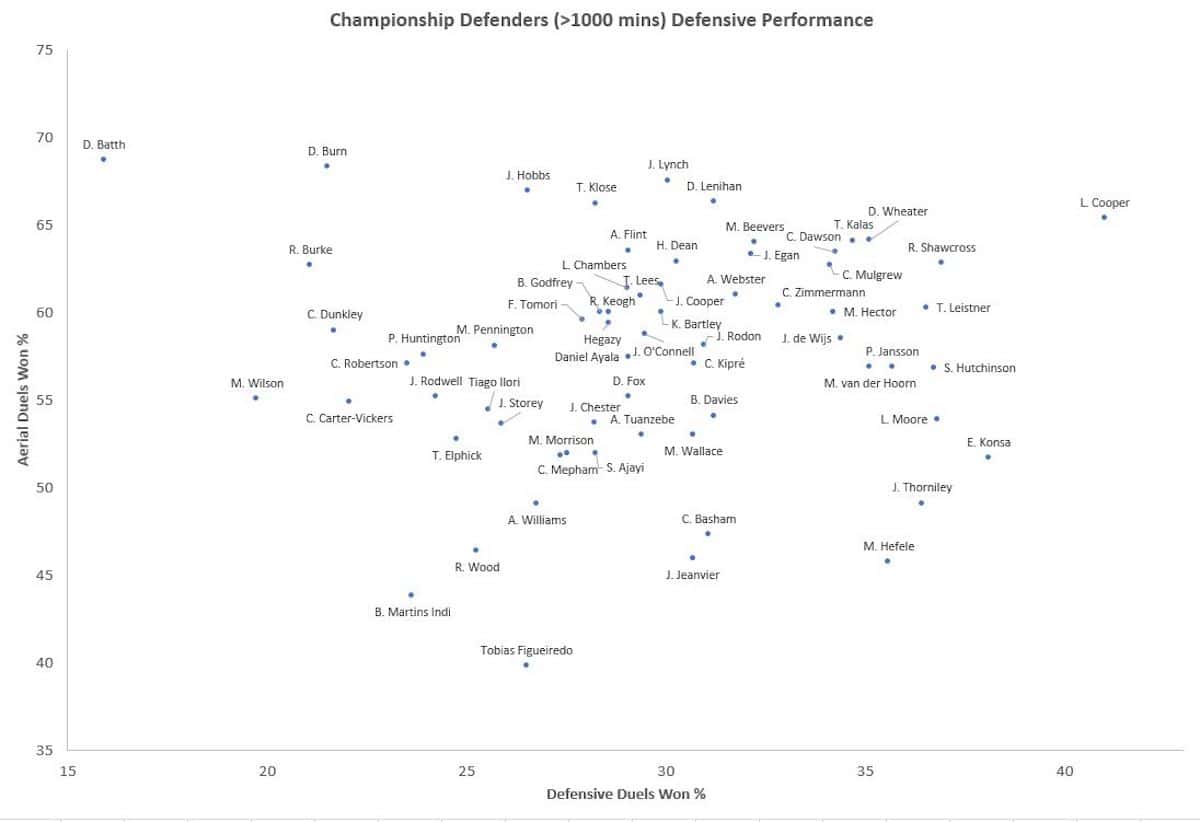 (This graphic is courtesy of @PannasNutmegs)

His improvement doesn’t end here. In fact, of all the metrics available in Football Whispers' lab, there are only three in which Cooper hasn’t improved under Bielsa: clearances, tackles won and forward pass percentage. Of these, the drop off in tackles won is insignificant; the defender picking up 1.02 Won per 90 minutes so far compared to 1.04 last season.

Now, it might be tempting to put this turnaround entirely down to Bielsa’s ability to improve players. A cursory glance at Pontus Jansson’s statistical change from last season to this indicates that there is clearly an upturn in his production since the arrival of the Argentine. But this improvement is nothing like the volte-face that Cooper has experienced. There must be something more going on.

A better place to start when trying to explain the Cooper phenomenon is with an analysis of Leeds United’s play style across the last two seasons. Comparing the team personas of Leeds from those seasons, it is clear that the tactical approach of the club has changed dramatically.

As you can see, during the combined tenures of Thomas Christiansen and Paul Heckingbottom, Leeds were a low possession, long ball team who relied heavily on dogged defending – making tackles and blocking to prevent the opposition from scoring.

Since Bielsa took over, everything has changed. Leeds are now a high possession side who look to work the ball into wide areas before crossing into the box – ‘overloading to isolate’ as Jed Davies has labelled it.

This modification of his team’s playing style shows up in Cooper’s own persona. Comparing this season’s statistics with last season’s, the difference is noticeable.

In terms of his game, the Leeds captain has gone from being an almost exclusively passive defender – where passive defending indicates the dogged defending of last season which relied on tackling and blocking – to a more balanced player who utilises both passive and active defending – that is, defending which relies on movement and pressing.

The shift towards possession-based football at Leeds has also made Cooper much more involved in the build-up phase, with his passing in development almost trebling.

Notice, however, this build-up passing is not necessarily penetrative: the centre-back has seen his offensive passing stats remain fairly constant. It suggests Cooper is shifting the ball into Kalvin Phillips or Adam Forshaw in the number six position, or out wide to the full backs.

That said, Cooper has seen his long balls per 90 minutes stats climb from 7.87 to 9.14. In tandem with Jansson, who prefers to carry the ball into more advanced areas and has seen his take-ons per 90 minutes increase from 0.35 to 0.65 in the last season, Bielsa’s centre-back pairing are clearly importance cogs in his attacking machine.

Is Cooper a better captain than a defender? This season, the question has been answered emphatically. In a possession-heavy system in which he is encouraged to defend more intelligently, Cooper has become one of the best defenders in the league and is in with a shout of the Player of the Season award when the end of the campaign comes around.

Which brings us finally to Bielsa. For the Leeds manager’s success has materialised out of the ashes of a once great club.

Taking a team that finished thirteenth in the Championship last season, he introduced a new style of play and overhauled the entire organisational structure, carrying Leeds to the top of the table while doing so. And in the process, he reinvented Cooper: a player many fans of the club had hoped was on his way out at the start of the season.