Arminia Bielefeld earned a spectacular away victory at the expense of Eintracht Frankfurt a fortnight ago. They will hope for a similar result against Borussia Monchengladbach who cannot get out of their midseason slumber.

Borussia Monchengladbach's victory over Bayern Munich was a blip on the radar as they continue to lose points. The Colts have lost four matches since and look unlikely to pose any threat to the rejuvenated Arminia Bielefeld. The Blues are unbeaten in five outings, winning thrice and drawing twice. While they have lost their last three matches to Gladbach, form and home advantage should allow them to turn the tables.

The resurgence in Bielefeld's form can be attributed to their improved goal scoring. The Blues have scored two goals in each of their last five outings and should not find any troubles against Gladbach. The visiting Colts have conceded 9 goals in the same period but with seven strikes sent against their rivals, will feel confident about their chances. Six of their last seven duels have finished with Over 2.5 total goals and this meeting should not be any different.

Bielefeld vs Borussia Monchengladbach: Check out the best odds and the latest stats

Bielefeld vs Borussia Monchengladbach: Check out the team lineups

Bielefeld were struggling in relegation slots before their return to form. They have gone five matches unbeaten since, adding much-needed distance between themselves and the drop zone. The Blues are only a point behind Monchengladbach and a win in this six-point affair should propel them to 11th on the points table.

Adi Hutter's arrival was supposed to make Borussia Monchengladbach more sturdy. Nothing has gone according to plan as they struggle on the offence and allow all and sundry to get behind their lines. They have conceded 11 more goals than their February 05 rivals, accruing more defeats in the process.

Questions About Bielefeld vs Borussia Monchengladbach 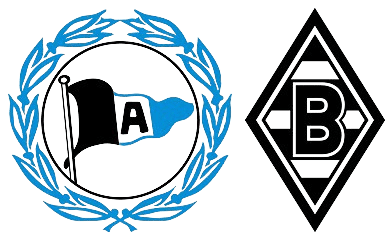 Who are the players to watch out for? Patrick Wimmer (Bielefeld) and Jonas Hoffman (Borussia Monchengladbach).