Bayern Munich to Win First Half

The relegation-threatened Arminia Bielefeld take on Bayern Munich in their next Bundesliga engagement. Both teams enter the field on the back of winless games.

First half honours for Bayern Munich

Bayern Munich appeared to have tricky challenges in the Champions League against Villareal, playing two winless games in the last three outings. However, the Bavarians have got three consecutive victories in the Bundesliga ahead of this game. On the other hand, things for Arminia Bielefeld are getting desperate, having lost five of the last six league attempts. The Blues are also winless in all of their previous H2Hs against Bayern, losing four of the previous five. So the visitors will be looking to start off with a bang and the probability for them for it is high.

Bielefeld will not go down without a fight

Besides the last away UCL attempts, Bayern have rattled the net in all of the previous games. While in opposition, the Blues’ front line was falling down in the recent away outings but the hosts have found the back of the net in four of the last five home games. two of the last three H2Hs also featured both teams on the scoring sides and we would be looking for the same in this game.

Bielefeld vs Bayern Munich: Check out the best odds and the latest stats

Bielefeld vs Bayern Munich: Check out the team lineups

The Blues conceded another away victory in the last game against Wolfsburg with a final score of 4-0. Arminia Bielefeld has managed only five wins in the 29 rounds of the 2021-22 Bundesliga campaign and sees themselves in a relegation zone with only 26 points. The centre-forward Fabian Klos and two other players will be on the injury list before this game.

The Reds would be disappointed to get eliminated from the UCL with a final aggregate of 1-2, ending the home leg in a 1-1 draw. However, Bayern still enjoys the lead of nine points in the Bundesliga points table, standing at first. The club manager Julian Nagelsmann will report three fitness concerns in the team coming into this game.

Questions About Bielefeld vs Bayern Munich 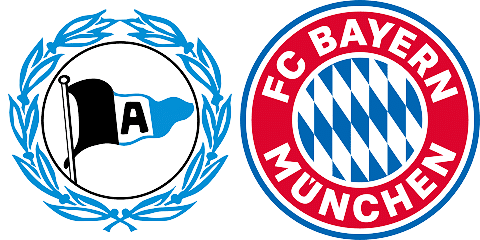 Where is the game being televised? Arena 4, beIN Sport (Fra), and DAZN Deutsch.