Bibiani Gold Star will be keen to end the campaign by getting back to the home winning track when they host Ashanti Gold in the next engagement. Both teams registered victory in their respective last matches.

The only H2H between the teams concluded with four goals and we predict this meeting as well to cross the total of 2.5 goals. Bibiani Gold Star have rattled the net seven times in only the last three home attempts, scoring at least two in all of them. Ashanti Gold also added eight goals to their collection in the last five games.

Bibiani Gold Star will be more than confident in terms of their offensive approach as they have scored in all of the recent five attempts and netted the ball in all of the recent home outings. On the contrary, AshGold also scored in four of the previous five league games, despite not getting consecutive wins. Adding more, the last H2H also featured both teams on the scoring side. Therefore, we will predict the same being the case in this duel again.

Bibiani Gold Stars vs Ashanti Gold: Check out the best odds and the latest stats

The Golden Boys ended the terrible streak of away winless outings and won in the last visit against Aduana stars. Bibiani Gold Stars have confirmed 14 wins and three draws in 33 attempts of the season to get to the eleventh position of the table. The team manager Michael Osei will have a complete squad to choose from for this duel.

Miners extended the unbeaten string of home attempts in the last game and earned a 2-1 victory against Bechem United. Ashanti Gold have confirmed 13 wins and seven draws, securing the seventh position on the table. The caretaker manager Thomas Duah doesn’t have any fitness issues in the team to report coming into this game. 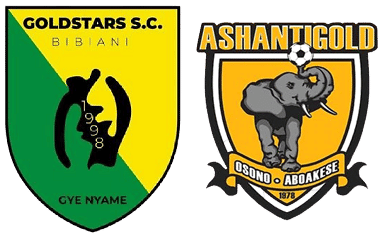 Where is the game being played? Bibiani Park.