Lionel Messi will officially be playing for Paris St Germain this season after signing a two-year contract with the French giants. The Argentine superstar has signed a contract which will see him receive £50 million in wages over the next two years along with a £25 million signing-on fee. The move reunites Messi with his South American compatriot Neymar. Messi was all smiles after landing in Paris to complete his medical and this was a sharp contrast to the tearful goodbyes given to Barcelona in his final press conference a few days ago.

For more than 20 years, Lionel Messi has been the face of Barcelona and he may very well continue to be the greatest player the club has ever seen. However, his playing days at the Camp Nou have finally come to an end after he signed a two-year contract with Paris St Germain. A tearful Messi held a press conference a few days ago to reveal his Barcelona exit. Those were real tears, as the Argentine had been completely convinced that he would remain at Barcelona, a club which has provided him with everything in his life. Yet, Messi would learn it the hard way that Barcelona simply did not have the financial strength to be able to afford his contract. 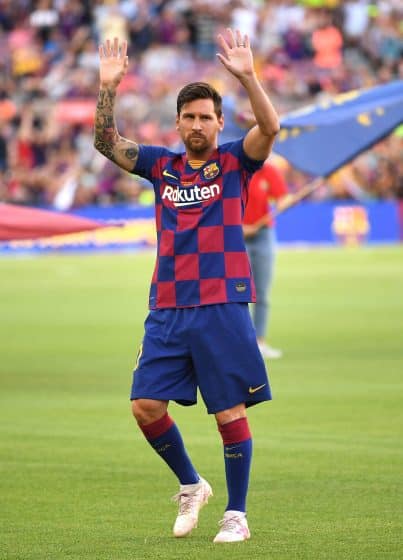 After an incredibly successful decade, one would assume that Barcelona were laughing their way to the bank thanks to sizeable returns from the prize money and commercial interests. Yet, the club witnessed an astronomical increase in debt levels over the last 10 years thanks to mismanagement and paying overinflated transfer fees for players who offered little to the club. By the time, Joan Laporta returned to the club as the president in March, the club’s debt had ballooned to more than €500 million. Furthermore, Barcelona’s wage bill was a remarkable 110% of their inflows and this was simply an unsustainable figure.

Messi did agree to cut down his wages by 50% as he was quite keen on staying at the Camp Nou. Of course, there would be the argument of Messi being able to lower his wages – or even play for free – if he is so keen on staying with the Catalan outfit. However, Barcelona – or any La Liga club – are legally barred from compelling anyone to take more than a 50% wage cut. Even with this wage cut, Barcelona would still be spending around 95% of their income on wages.

Laporta had been sounding confident of agreeing on a deal with Messi throughout the summer. A large part of this belief came from Laporta being confident of a cash injection from private equity firm CVC into La Liga. This will provide around €40 million of additional budget to Barcelona’s wage bill. Yet, this injection would turn out to be the only reason Laporta was confident of being able to afford Messi’s proposed contract with a 50% wage cut. However, Real Madrid and the finance boffins at Barcelona were not keen on this cash injection from CVC, as it did not seem to be in the best interests of the top clubs. This investment from CVC would see the firm get a 10% stake in all of the La Liga businesses for a total figure of €2.7 billion.

During his final press conference to announce the Barcelona exit, it was too apparent that Messi was clearly not happy with Laporta. The Argentine feels let down by the club once again and it is a series of problems that Messi has faced with the Catalan outfit over the years. Since 2014, Messi has been linked with a move away from the club, but he had been convinced every time by one factor or the other. This time around, the floodwaters had risen above the head and it left little room to manoeuvre.

At 34, Messi does not have a lot of time left at the top level. The Argentine superstar was himself very keen on switching to the MLS in a couple of years. Yet, the manner of his departure from Barcelona has left him with a sour taste in the mouth more than anything else. Even as Messi’s pictures are taken down the Barcelona promotional campaigns, it would be hard to forget – let alone erase – the memories left behind by little Argentine who came to the club at 13.