Our newly-crafted algorithm worked out the best current Premier League goalkeeper – but we took to social media to determine who is the greatest of all-time.

Having taken the 16 best stoppers we considered deserving of a shot at the mantle, we divided them into four polls and let Twitter sort out the rest.

We created four individual Twitter polls with four in each before taking the winner of each and adding them to one deciding ballot.

So who made the final cut? And did any particular keeper sneak a surprising amount – or surprisingly little – of the vote share? 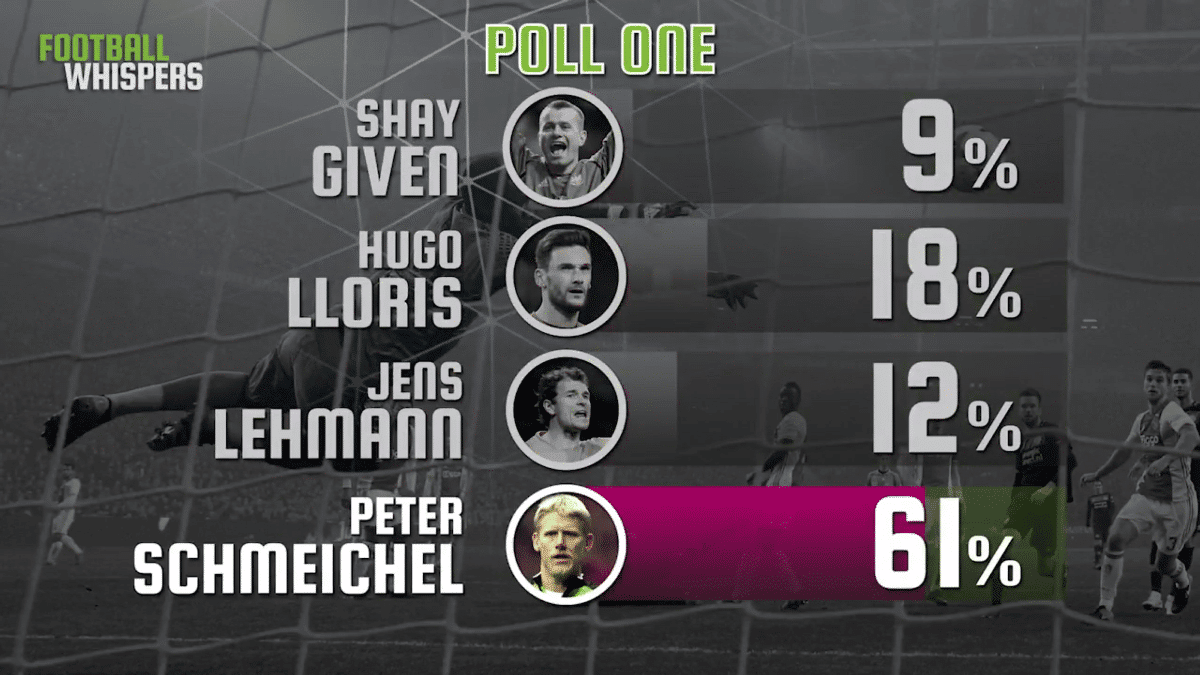 Shay Given was Newcastle United’s most devoted servant for more than a decade – and it was of the surprise to many that he stayed so long.

Capped 135 times for Ireland, Given was unfortunate enough to miss Newcastle’s Premier League heyday in the mid-1990s and never did himself justice at a developing Manchester City when he made the switch in 2008.

That Hugo Lloris garnered more votes than Premier League stalwarts Given and Jens Lehmann is testament to the Frenchman’s impact at Tottenham Hotspur since 2012.

In the vanguard of a new breed of goalkeepers that are almost as comfortable outside the box as within it, the regard for the 30-year-old is only set to rise should he continue his form at Spurs.

A man never out of the headlines, ‘Mad Jens’ – when he wasn’t berating his own teammates and hamming it up with Didier Drogba – was, in essence, a fine goalkeeper.

While never delivering the consistency of a David Seaman between the sticks, he is the last Gunners stopper to have experienced a title success and had plenty of memorable moments – for better or worse.

The Great Dane is synonymous with the rise of the Premier League – you can’t imagine its early era without the big, blond, floppy-haired Red Devil bearing down on a helpless striker.

It is little surprise that he cleared up with more than half the votes in this particular poll, his less dominant spells with Aston Villa and Manchester City of course notwithstanding … 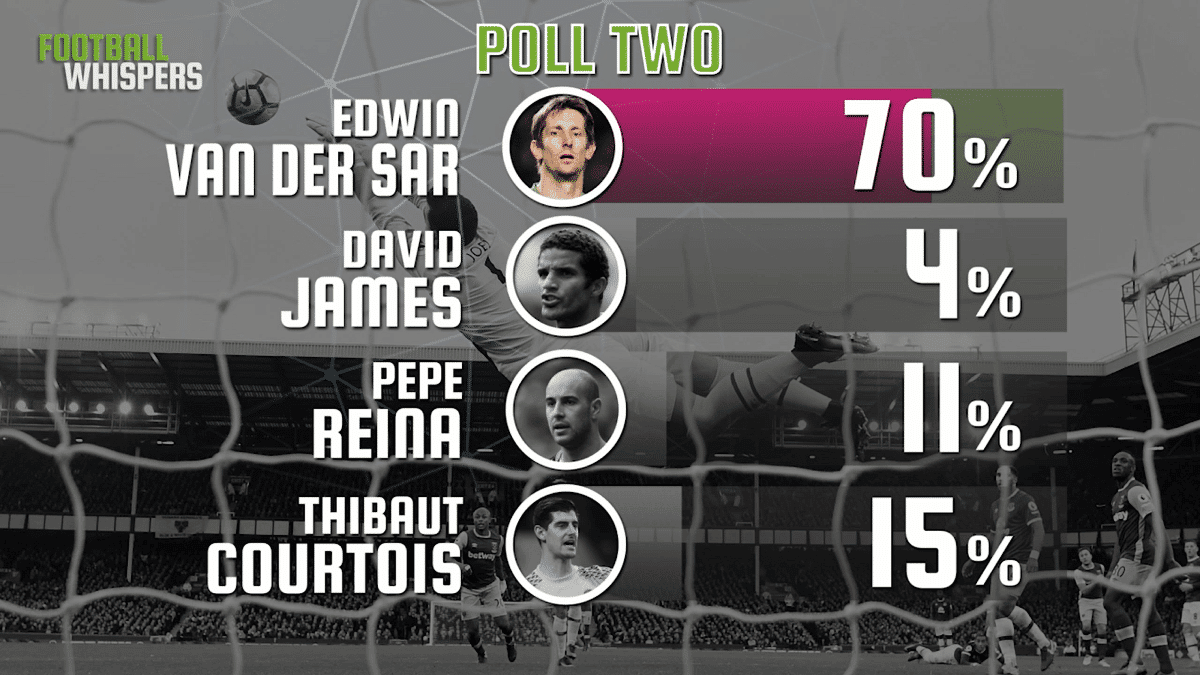 According to Sir Alex Ferguson, Manchester United didn’t go for Edwin van der Sar after Schmeichel departed in 1999 because they already had an agreement with … Mark Bosnich.

But when the Dutchman finally made his way to Old Trafford at the age of 35 via Juventus and Fulham in 2005, the next six years would see him collect 12 trophies and the hearts of fans the world over.

David James would have the habit of looking like the most naturally gifted goalkeeper in the land before wiping all the good will away by dropping a clanger.

But there is a reason why he accumulated 572 Premier League appearances and if anything he got better with age – arguably enjoying his most consistent spell when approaching his 40s with Portsmouth.

What Jurgen Klopp and Liverpool would do for a goalkeeper of the calibre that Pepe Reina was in his prime.

The recipient of three consecutive Premier League Golden Gloves trophies – for keeping the most clean sheets – he would have likely won more votes if his career at Liverpool had not fizzled out in 2013 while still only 31.

The youngest goalkeeper in our poll and one who could go on to be regarded as the greatest ever if his career continues on the same trajectory.

Having supplanted Petr Cech between the sticks for Chelsea in 2014, he has recovered from the Blues’ down year in spectacular style and is rated as the Premier League’s current top goalkeeper according to our new algorithm. 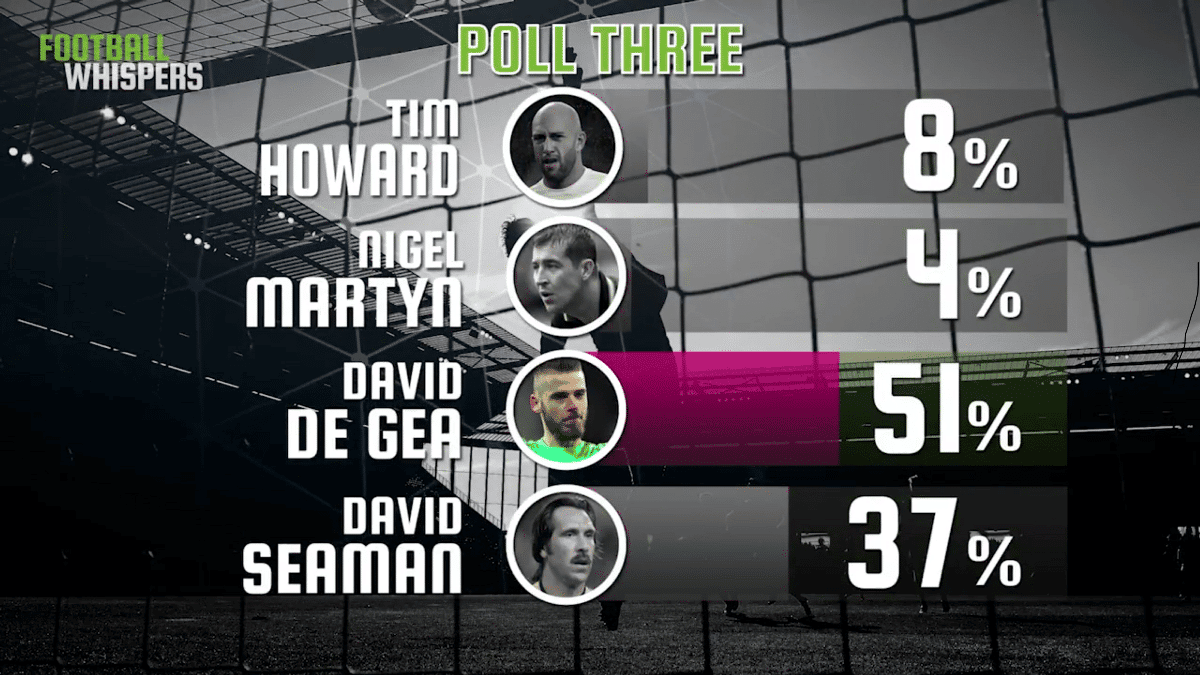 Though Tim Howard may not have fit the bill for United he most certainly did for Everton, as the American became the Neville Southall of the 21st century at Goodison Park.

He saved two penalties against Manchester United in a semi-final shoot-out to help the Toffees reach the FA Cup final in 2009, and left the club last year with 414 appearances in the bank.

Nigel Martyn was unlucky enough to have been parked behind Seaman for much of his international career but he did not go underappreciated by his clubs.

He was voted in as part of both Crystal Palace and Leeds United’s best-ever teams and enjoyed a swansong at Everton in 2003, where he performed at a high level until he was 40.

Though David De Gea has experienced nothing like the success of Schmeichel and van der Sar so far at Old Trafford, his undoubted class earns him a spot in the final.

The Spaniard is still only 26 but has racked up 257 appearances for United already – though with Real Madrid sniffing around once more, Jose Mourinho faces a fight on his hands in the summer.

David Seaman and his back four represented all that was good about Arsene Wenger’s early days at Arsenal in the mid-'90s – the only thing questionable about him was his ponytail.

Anyone too young to have witnessed what Seaman meant to Arsenal need only watch his outrageous save against Paul Peschisolido in the FA Cup in his last season in 2003. 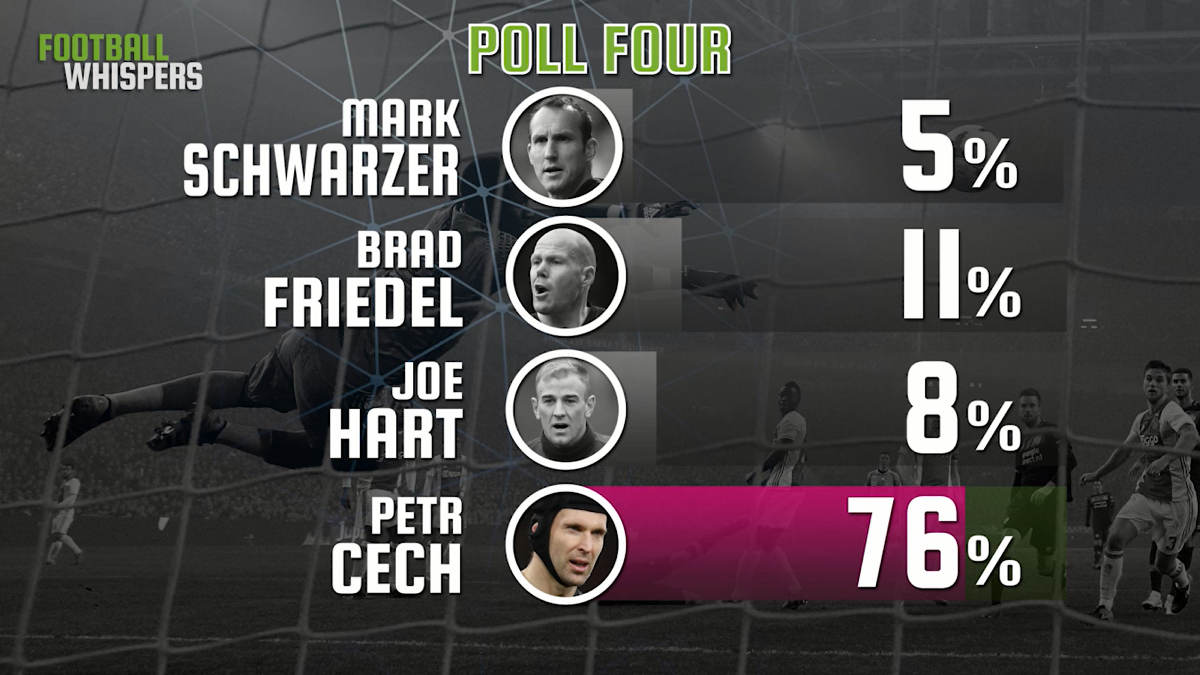 Mark Schwarzer was to Middlesbrough what Given was to Newcastle for 11 years – but the Australian flew under the radar for far longer than his colleague ever did.

Indeed, his ability only really came into the spotlight at Fulham, where he helped them reach an improbable Europa League Final in 2010, after which Wenger tried and failed to sign him.

Death, taxes, and Brad Friedel. Once upon a time the chances of the American starting a Premier League was as near certain as you could get.

His streak of 310 games came to an end in 2012, but his longevity was not his only trait as he was a trusted pair of gloves for Blackburn Rovers, Aston Villa and Tottenham Hotspur across 15 years.

Poor Joe Hart. Savagely axed by Pep Guardiola at Manchester City, he places third in this particular mini-poll while in exile from the Premier League.

Though he has not been flawless over the years, when the England No.1 is on his game he is almost impossible to beat – and at 29 there is still more than enough time to pen a tale of redemption.

Petr Cech wins this poll at a landslide and having been an ever-present of Mourinho-era Chelsea it is hardly surprising.

Four Premier League titles, four FA Cups and a Champions League to boot – his accolades rank among the very best and though he was turfed out of Chelsea by Courtois, remains a solid keeper with Arsenal.

And the winner is … 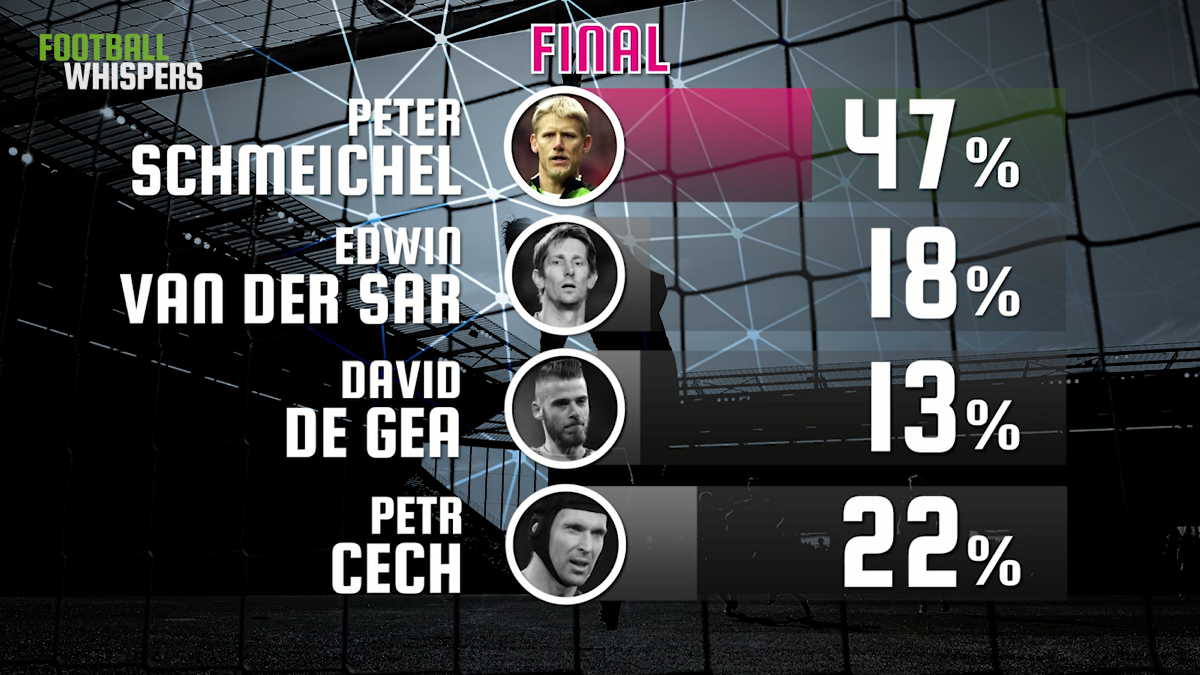 There was never any danger of three past and present Red Devils splitting the United vote as Schmeichel resoundingly beat all-comers to victory.

And a peer of Schmeichel’s, Football Whispers TV panellist Dave Beasant, has no qualms about the result.

“I don’t think there is any debate at the present time, the fact of his longevity and what he achieved at Manchester United,” said the former Wimbledon and Chelsea goalkeeper. “We could see that change with the modern keepers – Thibaut Courtois could stay longer at Chelsea and achieve greater things.

“But overall, there’s no grumbles at all with Schmeichel being the top keeper.”

If you need reminding of Schmeichel’s greatest hits – check out the video below.