Often it is the goalscorers in Europe’s top leagues who get the bulk of the plaudits. When Lionel Messi and Cristiano Ronaldo smash the 50-goal mark in a calendar year, they are, understandably, lauded.

Creativity is slightly less appreciated. But without those players who can play an incisive pass in the final third, the likes of Harry Kane and Sergio Agüero would be unable to rack up so many goals.

Here we take a look at ten of the most creative players in Europe’s top five leagues over the course of 2018.

A surprise name, perhaps, at the top of the list of players with the best xA per 90 in Europe’s top leagues this year. Bellarabi, Bayer Leverkusen’s 28-year-old right-sided winger, has been a menace for Bundesliga defences over the last 12 months.

He is quick and direct, an important player for Bayer in an attacking sense. This season, he has created an average of 0.45 big chances and played 2.14 key passes from open play per 90. And that is in a Bayer team sitting in ninth place and struggling for consistency in the Bundesliga.

Messi has always been about more than just goals. He creates almost as many as he scores: this season alone he has 10 assists to his name from just 15 La Liga appearances.

If he is not scoring, he is providing for another of his attacking teammates. For opposition defenders, nullifying Messi completely is near enough an impossibility.

The ceaseless argument as to which of he and Ronaldo is the better player is tiresome, but those firmly on the side of Messi might bring up his inimitable ability to both score prolifically and set up teammates. Few are as creative as the legendary Argentine.

The absence of De Bruyne for large parts of this season through injury has certainly been felt by Manchester City.

The Belgian midfielder was instrumental as Pep Guardiola’s side romped to the Premier League title with a record 100 points last season. His ability to spot the runs of his teammates, to hit passes and crosses with pinpoint accuracy, was unmatched in England’s top flight.

He has managed just one league start this season and City find themselves seven points behind Liverpool in the race for the title. Coincidence?

Costa has not always found it easy to establish himself in Max Allegri’s Juventus team. Competition for places at the Bianconeri is fierce, and the Brazilian has often missed out.

This season, he has started just four times in Serie A, and there is speculation over a potential move to the Premier League. When Costa has played for Juventus, though, he has been a consistent creator of chances.

Only four players in Europe’s top five leagues have a better xA per 90 than the former Bayern Munich winger.

Those who watched last summer’s World Cup in Russia will remember a couple of spectacular goals scored by Cheryshev, one of the tournament’s standout players. By the time Russia were eliminated, he had scored four, a total bettered only by Harry Kane.

Cheryshev is not so prolific in front of goal at club level. Instead, he is more of a provider. Valencia have struggled in La Liga this season, but the former Real Madrid midfielder has been a bright point when available.

Injury kept Alves out of the World Cup and it has plagued him during the first half of this season, too. The 35-year-old, since returning to full fitness, has found it difficult to force his way back into the Paris Saint-Germain team.

PSG will be aware, though, that Alves, despite his age and injury problems, remains an exceptional right back when at his best. His xA per 90 of 0.37 over the last year is amongst the best in Europe and by far and away the best of any defender.

There are plenty who bemoan Dembélé’s rawness, his occasional lapse in concentration. The Frenchman is still young, still in the process of developing as a player.

But his talent is unquestionable. The 21-year-old has established himself as a regular in Ernesto Valverde’s team this season, and has been particularly impressive in front of goal in recent weeks.

He is creative, too. Dembélé, playing alongside Luis Suárez and Lionel Messi, is as good at picking out a teammate as he is the top corner of the net.

Few players have improved as rapidly under Pep Guardiola as Sterling. The former Liverpool winger has become one of the Premier League’s most productive players, both in terms of goals and assists, under the tutelage of the Catalan coach.

This season, Sterling has scored nine and provided six assists in 16 Premier League appearances. And his xA per 90 over the course of the year is up there with the best.

Any remaining detractors will find it difficult to argue that he is not hugely effective in the final third.

It has been an incredible year for teenager Jadon Sancho. After opting to leave Manchester City for Germany in 2017, the 18-year-old has broken into the Borussia Dortmund team and excelled.

BVB’s six-point lead at the top of the Bundesliga table is in large part down to the performances of Sancho and his attacking teammates.

The England international – he made his debut for the national team against Croatia in October – has racked up seven league assists this campaign, continuing where he left off towards the end of last season.

Eden Hazard is making a habit of winning games for Chelsea almost single-handedly. He scored twice against Watford on Boxing Day, taking his total for the Premier League campaign so far to ten in 18 appearances.

The Belgian is not a selfish player, though – far from it. He has nine assists to his name in the league so far, and that total will almost certainly rise as the season progresses. In the Premier League, only Manchester City’s De Bruyne and Sterling have a better xG per 90 this year than Hazard. 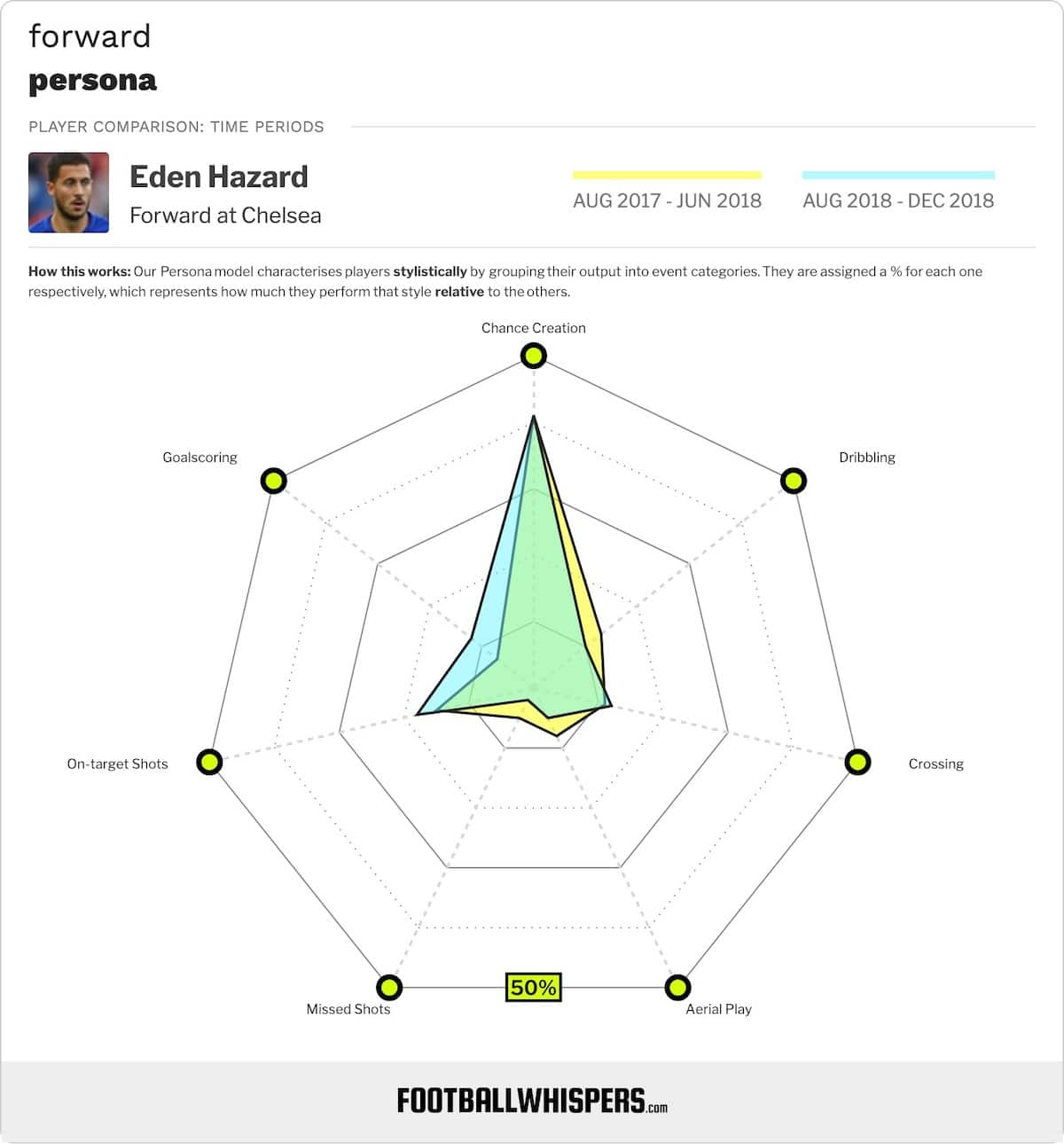