João Félix is the most sought after teenager in world football. Despite only bursting onto the scene this season, the 19-year-old, if reports are to be believed, tops the summer wishlist of a number of Europe's elite clubs.

With his release clause in the region of €120million, any move for the Benfica star will more than likely see a club break their transfer record.

But on the basis of his performances this term, he's worth every penny.  He netted a hat-trick in a Europa League quarter-final. He's scored against rivals Porto and Sporting Lisbon. And he has been pivotal in Benfica climbing to the top of the Primeira Liga table.

But the hard work has only just started for the youngster. His career is already at a crossroads and if he fails to get his next move spot on then he could fall into the category of what might have been as opposed to battling with Kylian Mbappé for the Ballon d'Or over the next decade.

Many youngsters move too soon. They opt to chase money instead of playing time and their career comes to an abrupt halt. Félix could be a generational talent. But it all hinges on what he does during the summer transfer window.

Benfica could decide to keep their prized asset. It seems unlikely given their entire business model is built around developing players before selling on for huge profits but they may feel as though another season at the Estádio da Luz could pocket them more money down the line.

Yet if French journalist Mouhamed Bouhafsi is to be believed, Félix is leaving this summer. So which of the four teams in the race would be the best place for the versatile forward to flourish?

For special talents, the Reds will break the bank. That is if reports are to be believed. They tried to bring Mbappé to Anfield and Spanish media claimed they bid in excess of £100million for Marco Asensio. The club also spent a combined £130million on Virgil van Dijk and Alisson.

While it might not seem like a shrewd investment Michael Edwards would make, if Félix did develop under Jürgen Klopp then Liverpool could one day command double the fee they'd have to pay to land him. 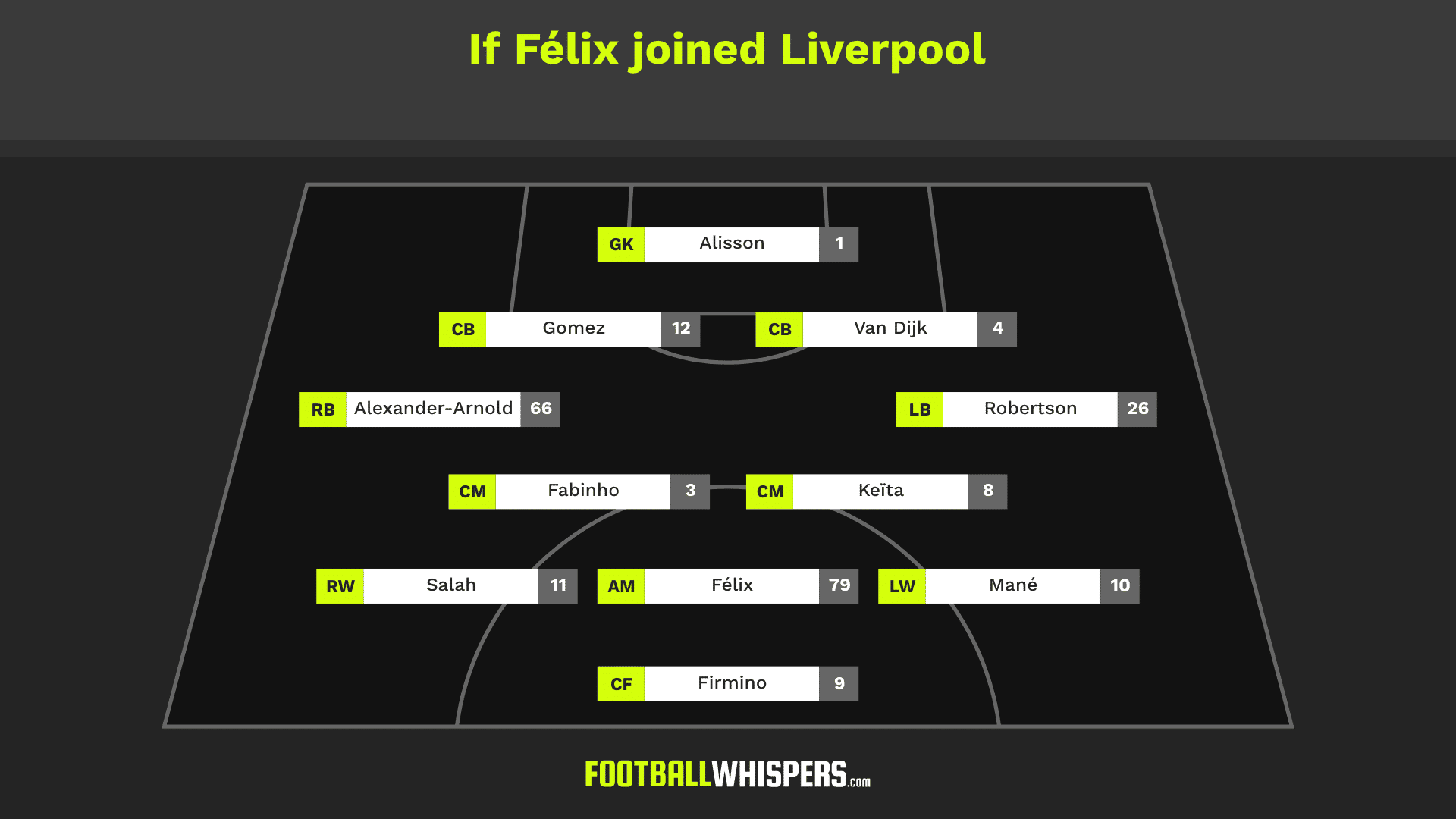 Liverpool are in the market for a forward this summer. Timo Werner, Nicolas Pépé and Memphis Depay are just a few of the names linked with a move to Anfield.

While Félix isn't similar to that trio in terms of profile, he can play multiple positions and brings creativity and goals to the team. He could interchange with the existing front three without losing anything from his game.

Gabriel Jesus was supposed to be the heir to Sergio Agüero's throne at Manchester City but his career has tailed off with the prolific Argentine in better form than ever before.

But the former Atlético star turns 31 in the summer and isn't going to be able to play on forever. A potential replacement needs to be identified and signed so he can learn from the City No.10 himself. 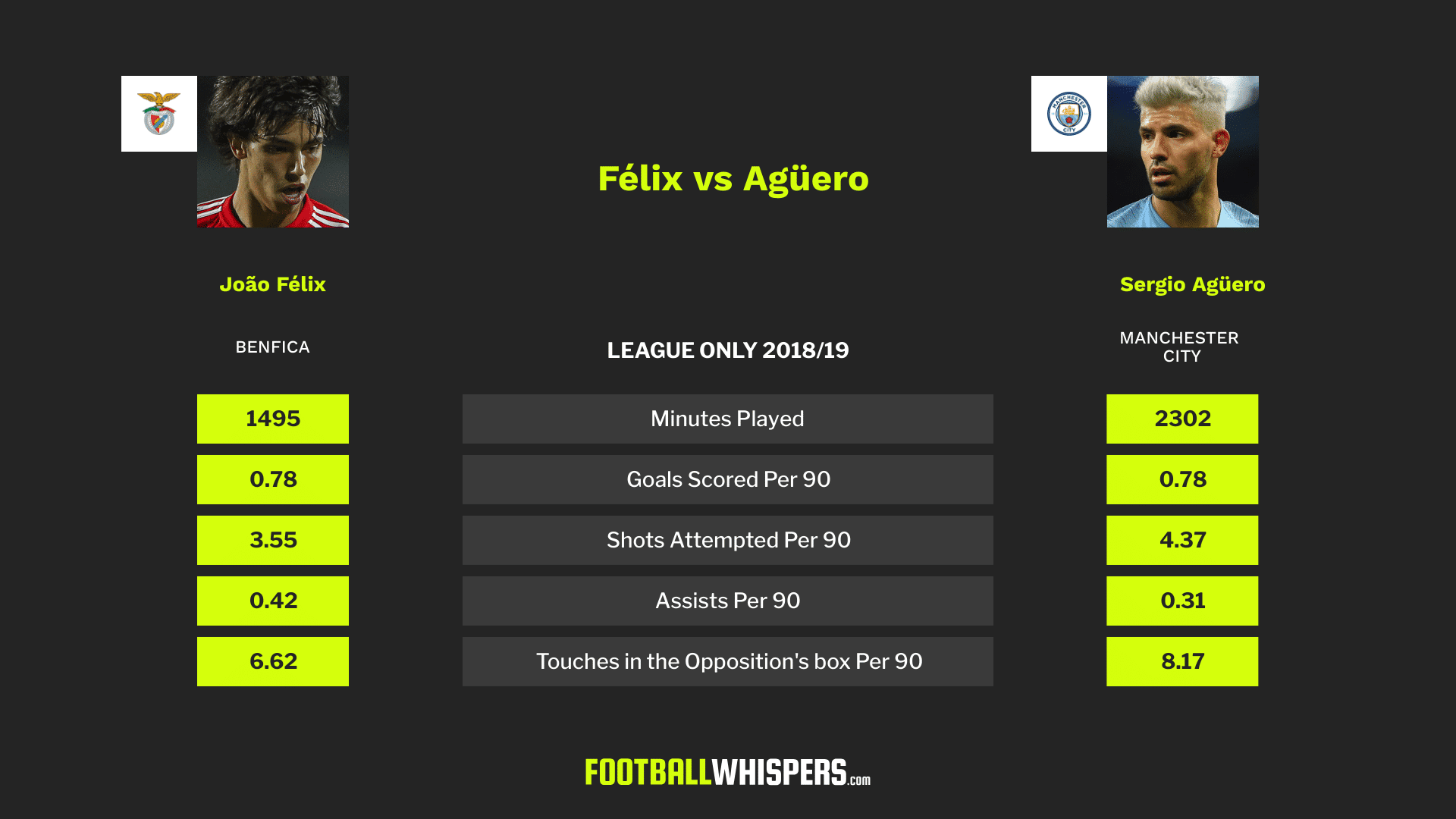 Félix isn't as clinical as Agüero but he is finishing at a similar rate this season. The wonderkid has a 0.78 goals per 90 record, on par with the City man, though he has played considerably fewer minutes.

In this City team he could flourish alongside compatriot Bernardo Silva, Raheem Sterling and Leroy Sané. And the Premier League champions wouldn't have to touch their forward line for the best part of a decade.

In a strange way, Old Trafford might be the best tactical fit for the youngster. Yes, Ole Gunnar Solskjær is struggling right now and United seem to lack an identity, but they're the only team linked with Félix to dabble with a two-man strikeforce.

It's the system he's been deployed in at Benfica and one he's excelled in. That isn't to say he wouldn't adapt to a 4-2-3-1 or a 4-3-3 but he's tried and tested alongside a strike partner. He knows how to play off a man and act as a link between midfield and attack.

With the Red Devils reportedly open to cashing in on Romelu Lukaku, Félix could arrive to partner Marcus Rashford in attack. And the pair, on paper at least, look like they could have the ideal dynamic to take United back to the top table of European football.

Félix has openly admitted to idolising Cristiano Ronaldo. Would he really be able to pass up the opportunity to play alongside him?

Juventus are believed to be interested in signing the Benfica man to replace Paulo Dybala in their squad. The Argentine had a memorable 2017/18 campaign but has struggled since the arrival of Ronaldo from Real Madrid. 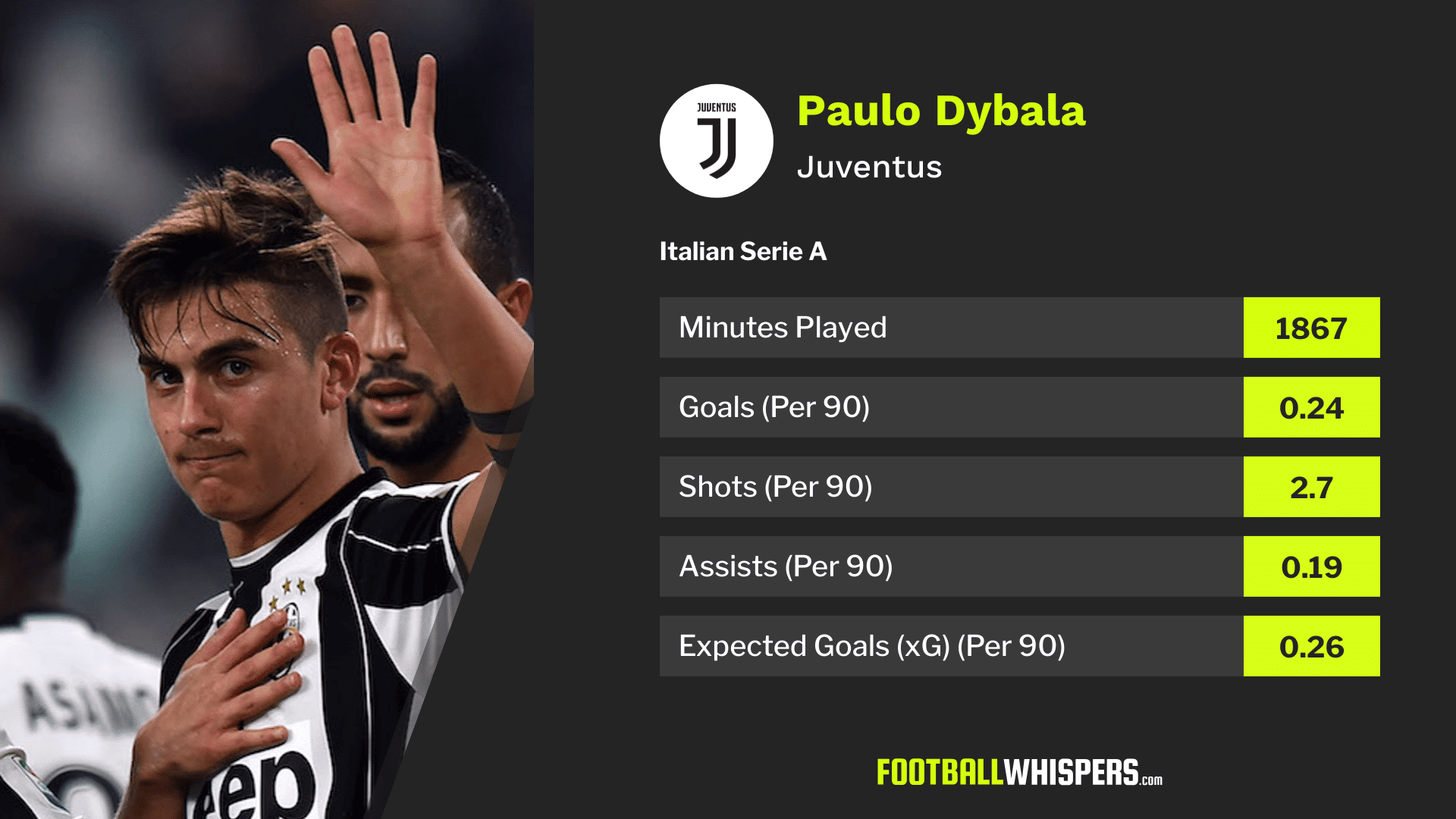 Reports in Italy claim Juventus will sell him this summer and would likely bestow the famous No.10 jersey on the 19-year-old. He would learn off Ronaldo before eventually replacing him as the poster boy of the club.

It's difficult to judge how this move would go. Ronaldo's goals come at the expense of others. It happened to Benzema while playing in Spain and it's happened to Dybala. Could the same thing happen to Félix?

On the flip side of that, he could learn a lot from the five-time Ballon d'Or winner. Traits that will help him become the best in the world down the line.