It appeared Kevin De Bruyne would break the long-standing record for assists in a Premier League season until recently, so it will come as a major surprise to many to learn that the Belgian does not even make the top ten in Europe's top five leagues for assists per 90 minutes for the 2017/18 campaign.

The playmaker was a creative force of nature for Manchester City as Pep Guardiola's men romped to a record points tally in the Premier League, and he was on course to surpass Thierry Henry's 2002/03 record of 20 assists.

However, after supplying three assists against Leicester City in February, De Bruyne managed to add just two more to his total in the following 11 matches to finish the season with 16.

It was still the most across the top five European leagues – one more than team-mate Leroy Sané and two more than Luis Alberto and Thomas Müller – but while totals give an overall outcome, it's assists per 90 that reveal which players made the most of their time on the pitch and De Bruyne comes in at 16th, with 0.46 assists per 90 minutes.

With this in mind, we've decided to take a look at the top ten players for assists per 90 in their respective league campaigns. 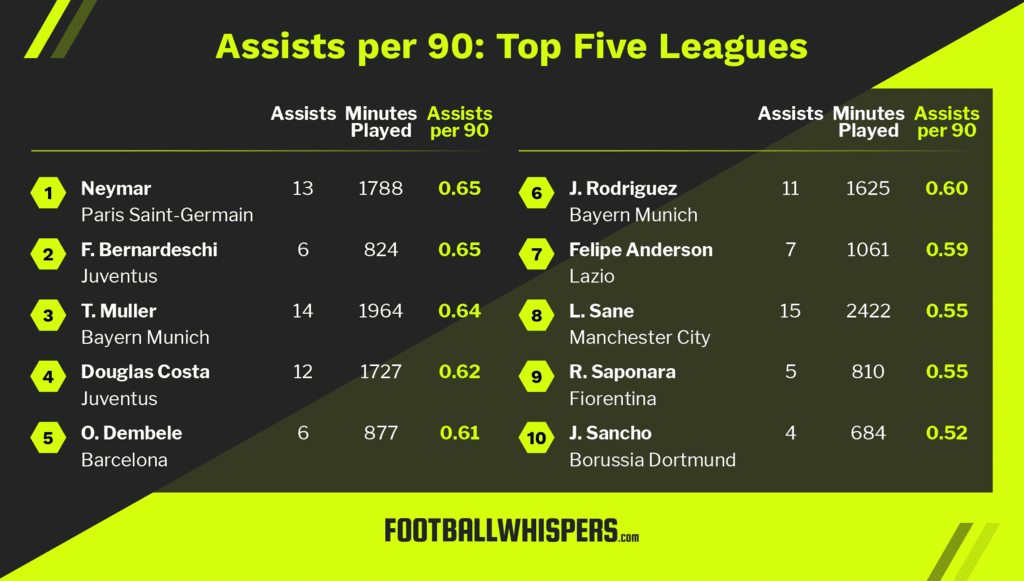 The world's most expensive player, Neymar, tops the list, having managed 0.65 assists per 90 – the same total as Federico Bernardeschi – but the Juventus winger has had an injury-ravaged debut season in Turin so has only made seven league starts and 15 substitute appearances, whereas the Brazil superstar has been in the XI for all 20 of his Ligue 1 outings.

Bernardeschi's team-mate Douglas Costa comes in just behind on 0.62 but over a much larger sample size. Müller continues to be a productive outlet for Bayern Munich, chipping in with eight goals and 14 assists in the league.

Liverpool transfer target Ousmane Dembélé comes in at fifth. In his limited playing time for Barcelona he averaged 0.61 assists per 90. Talk of him being a flop and reports suggesting he'll move on this summer seem premature when there's a lot of potential to be fulfilled, after missing half of the season through injury.

James Rodríguez is enjoying his time in Bavaria. Though his time was managed carefully he still finished with 11 assists to his name at a rate of 0.60 per 90. It's a similar story with Riccardo Saponara. Fiorentina used the playmaker sparingly, due to his numerous injuries, but he sill came up trumps in terms of assists.

The biggest shock, perhaps, is the inclusion of Jadon Sancho. The teenage sensation, whose form recently has resulted in some fans urging Gareth Southgate to include him in England's World Cup squad, has averaged 0.52 assists in the limited minutes he's played for Borussia Dortmund this season. Again, the sample size is small – with only seven league starts and five outings from the bench – but he's taken his opportunities whenever called upon to underline his incredible talent.

De Bruyne's non-inclusion has already been discussed but there are other high profile names absent, including one of the world's greatest ever players.

Lionel Messi may have ended up with 12 assists this season but by playing 2973 minutes, it has diluted his assists per 90 record down to 0.36.

Alberto, Dimitri Payet, Memphis Depay and Pablo Fornals also missed out despite good campaigns. These players make the top ten lists for total assists, having been able to sustain their output over the entire season, but due to the time they spent on the pitch this season they miss out on the per 90 list.