While Ajax and Borussia Dortmund battle for pole position in Group C, Besiktas and Sporting CP have been left to fight for UEFA competition continuation with third place in their sights. Both sides have disappointed in their Champions League outings and need a positive result to resurrect their campaign.

Here are our predictions for Besiktas vs Sporting CP.

Besiktas have been disappointing this season, which is evidenced by their recent form of just one win from their last five fixtures. At the same time, Sporting CP has claimed four wins, adding confidence in their ability to spring a surprise over the Turkish giants. The last time these sides met, Sporting claimed the honours and we are backing them to repeat the feat at the Vodafone Park.

Neither Besiktas nor Sporting has a defence that can be relied upon. They have conceded ten goals between themselves while only sending two in return. We believe the latter area of their performance will see improvement as a high scoring fixture is played between them. Both sides need the points in their battle for third place and it should come to fruition on October 19.

Besiktas and Sporting have scored one goal apiece in their two Champions League outings this season. Irrespective of their form on the continent, they have regularly scored in their domestic competitions, a pattern that should continue as they face foes of similar calibre. Their last two duels also saw them both get on the scoreboard and this meeting should not be any different.

Besiktas vs Sporting CP: Check out the best odds and the latest stats

With three first-team regulars out of action, Besiktas have their work cut out for themselves against Sporting CP. Both sides are fighting for a place in the UEFA Europa League knockout rounds as Ajax and Borussia Dortmund have the Champions League affairs to themselves. The Turks need to be solid at the back as they have trailed at half-time in six of their last eight European fixtures.

Sporting will feel confident knowing that their rivals are struggling at the back. However, the Portuguese outfit cannot relax as their attackers have failed to deliver in their continental obligations. With just one goal scored and four conceded, they are as vulnerable at the back as their hosts.

Questions About Besiktas vs Sporting CP 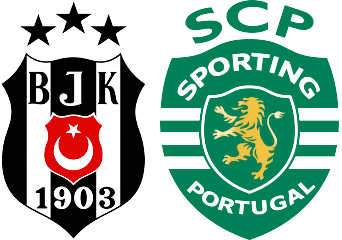 Where is the game being televised? COSMOTE Sport, DAZN Deutsch and Viaplay.

Where is the game being played? Vodafone Park (Istanbul).