David Silva may be slowly approaching the denouement of his Manchester City career but, in Bernardo Silva, Pep Guardiola has found the perfect heir.

Bernardo, the delightful Portuguese playmaker who has lit up the Etihad Stadium in recent weeks, was signed from Monaco in 2017 very much with the future in mind.

With Silva and Kevin De Bruyne already firmly established as City's main creators, Bernardo was under no immediate pressure from Pep Guardiola to set the Premier League alight.

Much like Gabriel Jesus, who is tipped to succeed Sergio Agüero as City's chief marksman in the future, the hope was that Bernardo's integration into the City set-up would be gradual and smooth, allowing the midfielder to acclimatise to English football at his own pace.

Such a strategy has paid dividends. Having started just 15 league games last season Bernardo has featured prominently in his sophomore season, with De Bruyne's absence through injury allowing the 24-year-old to express himself and make his mark on this City team.

Bernardo has started all but one of City's league games this term, scoring three goals and notching the same amount of assists. His two Champions League strikes take his tally up to five; just four shy of his haul for the 2017/18 campaign.

And there has been evidence recently of Bernardo's growing influence. He starred in City's 3-1 derby victory over Manchester United with two assists, a measure of how he's filled in during De Bruyne's absence.

This season, Bernardo has improved his output in several categories, including open play key passes, big chances created, long balls and scoring attempts. His expected goals assisted per 90 and open-play xContribution per 90 are also up on last season. While his passing accuracy has dipped slightly (from 86.9 to 85.4 per cent) his long ball accuracy has improved dramatically (70.7 per cent, up from last season's 53.8). 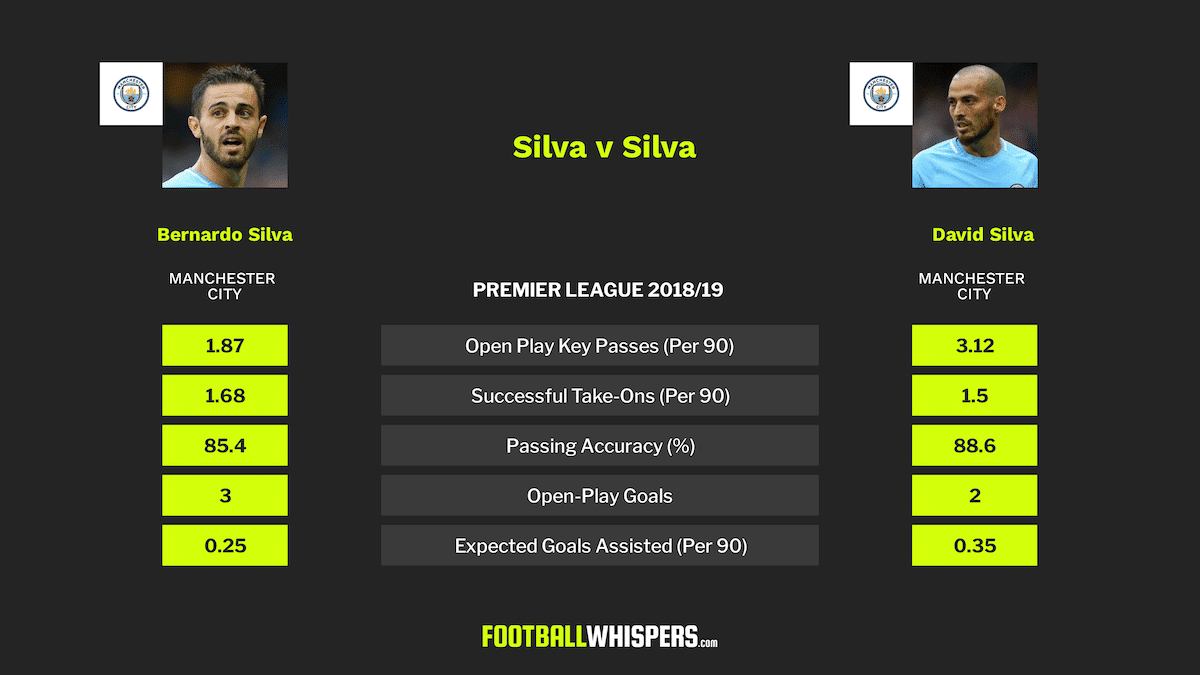 His 25 key passes in total this season offer a glimpse of his consistent creative influence on the Premier League champions.

With Cristiano Ronaldo currently out of the international picture, Bernardo has stepped up for his country, too, with Portugal qualifying for the UEFA Nations League final stages on their home patch next summer.

With that tied up, Bernardo will shift his focus to the Premier League once again. Eight years Silva's junior, the Benfica academy graduate is showing signs that he can rise to the daunting prospect of being the Spaniard's successor at the Etihad.

Having absorbed Guardiola's tactical teachings, Bernardo is now expected to play an increasingly influential role as the season wears on and City seek to replicate their domestic dominance in the Champions League.

There is some way to go before he can match his mentor's exploits, but City fans should feel at ease; with Bernardo around, their side's creativity will not suffer in the post-Silva era.