Pep Guardiola has done little wrong since becoming Manchester City manager. But if there is one criticism to be levelled at the Catalan tactician, it is that he abandoned one of his core principles.

ready to be moulded into tomorrow's stars.

Mascherano and Alves were both big successes who cost a relatively modest amount – £20million and £23million respectively – but there were expensive flops too. Think Dmytro Chygrynskiy and Zlatan Ibrahimović.

Guardiola's preference, though, was always to coach the players he had at his disposal or promote from within before recruiting someone from elsewhere.

So when Leroy Sané was ruled out for around six weeks having been on the receiving end of an ‘industrial' challenge from Joe Bennett during Manchester City's FA Cup fourth round tie at Cardiff, the club's response was to target Leicester City winger Riyad Mahrez.

The Algerian is the Foxes' key man. He was impressive in promotion, mesmeric in their title win and is dazzling once more this season. So he became a Manchester City transfer target; a £50million plus stop-gap in light of Sané's lay-off.

At this point Bernardo Silva must have been wondering what he had done to upset Guardiola.

The Portuguese playmaker signed from Monaco last summer for £43million and had been one of the stars of the side which had upset the odds to topple Paris Saint-Germain and clinch the Ligue 1 title.

But he has made just 17 starts in all competitions, only eight of which have come in the Premier League. Comparisons to Sané have been drawn. The German international was used sparingly  in the first half of last season before being gradually introduced and ending the season in superlative form.

“Leroy needed time to adapt a bit – to the way we play,” Guardiola told the Manchester Evening News in December. “Bernardo doesn’t – he believes and is ready to play.

“It’s because I decide (that he doesn’t play more). My feeling is that he’s playing at a high level. Leroy was not confident at the start of last season, he didn’t believe how good he was.

“Bernardo is in the same situation as Gabriel Jesus and Sergio Agüero. He’s able to play and has amazing quality and personality.

“He is not scared. It doesn’t matter where he plays. But other players are on top form.”

That was December. Two months later and said players are no longer available to Guardiola. But presented with the perfect opportunity to give Silva a run in the side, the Catalan instead made Mahrez a Manchester City transfer target.

The most obvious explanation is that the Portuguese is an entirely different kind of winger to Sané. Where the latter is deadly at pace, driving at teams and going one-v-one with full-backs, Silva is a more nuanced, intricate wide player. While the former Monaco man is no slouch, his best work for les Monégasques was done cutting in from the right and onto his left foot; utilising the dribbling ability which saw him likened to Barça great Leo Messi while in the principality.

The vast majority of Silva's assists come from checking back onto his left foot, opening up his body and providing a telling delivery. A perfect example of which, taken from Monaco's win over Nantes last season, is below.

In the first image Silva appears to have run into a dead end. Sandwiched between two Nantes defenders there looks to be nowhere to go. Instead, with a drop of the shoulder and a shimmy, he wriggles free and onto his favoured left.

Having manufactured the space he needs, he looks up, sees the run of Kylian Mbappé and whips an inch-perfect delivery into the forward's path and the teen superstar heads home Monaco's third just before half time. 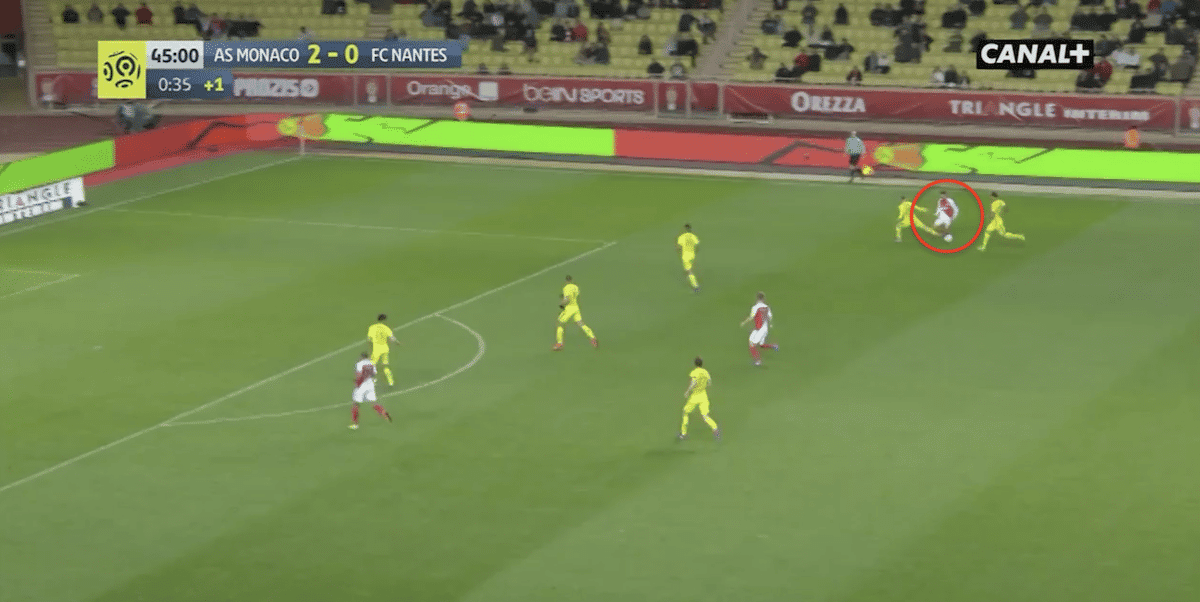 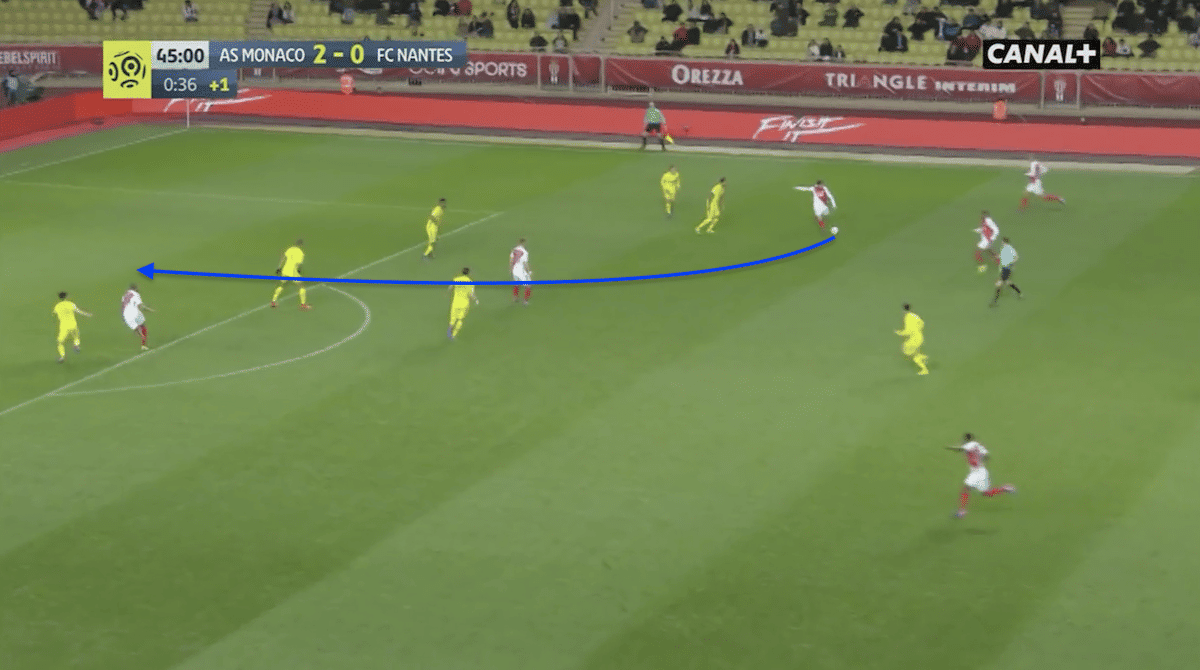 This season Manchester City have scored an inordinate number of goals from cut-backs or low crosses into the box. That is not a coincidence. Guardiola's side have demonstrated that by getting into those areas they maximise their chances of scoring.

And that fits Silva perfectly. He has the close control, trickery and balance to dance in and out of the tightest spaces before picking the right pass or cross. Take his assist against Shakhtar Donetsk in the Champions League.

Having got in behind as City counter, Silva drives into the box. With Sané making a run towards the near post, the temptation might be to whip a low ball into the German's path (blue line).

But Silva is aware of Raheem Sterling's run and, instead, cuts the ball back (yellow line) for the in-form England international to lash in off the underside of the crossbar. 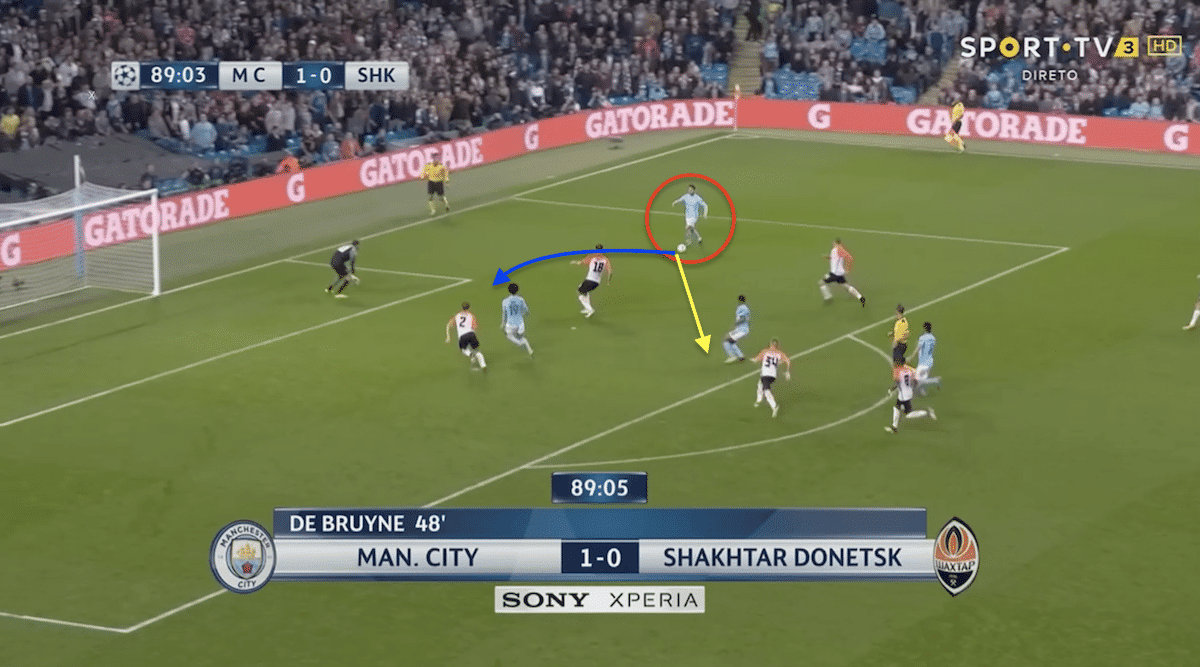 Sterling is the man who has made the right-wing berth at City his own this season. With 14 Premier League strikes to his name, the former Liverpool man is enjoying his best season in front of goal and has doubled his tally of 2016/17.

It would be he who would make way for Silva to fit into Guardiola's starting XI. But by switching Sterling to the left – a position he has played plenty of times previously – City would get the balance of having a direct, pacy winger back on that side in place of Sané while opening up a role for Silva.

The diminutive Portuguese isn't the direct replacement for Sané that Guardiola desires. But he is an outrageously talented player who is surprisingly robust despite his slight frame. He is hard to knock off the ball and has shown in his limited appearances he deserves the chance to make a first-team spot his own.

Speaking last month, the Portuguese international told the Sunday Mirror: “One of the best things about playing for Pep is that he makes you feel important.”

It's time Guardiola did just that by making Silva a vital part of his side.